The long awaited Tour de France started a few days ago, and as we love France, we decided to put together a must-visit guide so you get to learn more about these beautiful French cities during the different stages of this world famous competition.

Also, we have a surprise for bike lovers! In collaboration with iDBUS, we’re offering to our loyal customers a chance to win a trip to Paris during the final stage of the Tour de France, which’ll be held on July 26th! Enter the contest and get a chance to win a weekend for two in Paris , transport and accommodation included. There’s more! You might also win a bike from Fixie Design!

*Open to European residents only*

From the northwest shores that border the English Channel, to the east’s mountainous regions, to the City of Light, taking the bus in France is sure to introduce travelers to spectacular sights thanks to the diversity of its territories. Just in time for the Tour de France, why not take part in the festivities by following in the event’s tracks and visiting the French hexagon’s top destinations? Like the race, our tour begins in the North, as it trails the coasts of Normandy and Brittany, all the way to the Midi-Pyrénées and the Rhône-Alpes, ending in the capital city on the glamorous Champs-Élysées.

After a short run in the Netherlands and in Belgium, the French portion of the Tour de France begins its journey in Nord-Pas-de-Calais and rides through four cities: Cambrai, Arras, Amiens, and Abbeville. Both regions will surely impress visitors with their rich history and culture.

Top sights: Amiens is known for its Gothic Cathedrals, while Flemish-Baroque-style structures in Arras are a must-see for architecture aficionados.
Insider tip: Did you know that Amiens houses the tallest (completed) cathedral in France?
Potential day trip: Located near Belgium, Lille boasts wanderlust-worthy Flemish architecture that you won’t find in most French cities.
Bus tip: The drive from the north of the country is filled with endless fields of yellow flowers. You’ll get the chance to Instagram a few if your bus takes a break at a rest stop.

Heading west, the Tour de France continues with Upper and Lower Normandy, from Le Havre to Livarot. Nestled between London and Paris, the region is a visual treat with its sandy beaches and impressive white cliffs.

Top sights: Le Havre’s many museums, along with its city centre, which was named a World Heritage Site. History buffs will appreciate the Normandy American Cemetery and Memorial.
Insider tip: Be sure to eat Livarot cheese in Livarot!
Potential day trip: The Mont Saint-Michel is a must for anyone visiting Normandy.
Bus tip: You can spot windmills on a portion of the road from Normandy to Brittany, which will make you feel like you’re riding through the Dutch countryside.

Referred to as “Little Britain” thanks to its Celtic influence, this region borders the English Channel and the Celtic Sea.

Top sights: The cuisine in Brittany will definitely appeal to foodies. Pair your crepe or Breton galette with cider, the region’s specialty. Seafood is also a staple here, with fresh mussels and oysters caught straight from the Atlantic Ocean. Alternatively, one of the most stunning castles in France, Château de Fougères, awaits visitors, while the Museum of Fine Arts of Rennes has a vast collection of Egyptian, Greek, and Roman art.
Insider tip: Brittany is big on cycling and has many bike paths to accommodate cyclists.
Potential day trip: Known for its pink-hued sand and rock formations that go on for 30 kilometres, The Pink Granite Coast (Côte de granit rose) should be on your bucket list.
Bus tip: The ride from Brittany to Midi-Pyrénées is a long stretch, so pack plenty of snacks and a good book!

The Tour de France’s next leg of the race resumes in the country’s largest region, beginning in Tarbes. With its mountainous backdrop (read: steep bike trails), the Midi-Pyrénées is the perfect destination for adventure enthusiasts.

Top sights: Plateau de Beille, Cauterets, and Tour de France newcomer, Le Pierre Saint Martin, are popular ski resorts in winter and offer a host of activities in summer like paragliding, water rafting, kayaking, and paintballing.
Insider tip: Cauterets is also a popular spa town. Take a well-deserved break at one of their thermal spring resorts surrounded by the Pyrenees Mountains.
Potential day trip: Visit the Midi-Pyrénées’ capital city, Toulouse. Dubbed “La Ville Rose,” this city is known for its architecture composed of pink bricks.
Bus tip: The bus terminal in Toulouse travels to major cities like Paris, Barcelona, and Milan. Some are overnight trips so you’ll wake up in a new city as if you simply snapped your fingers! 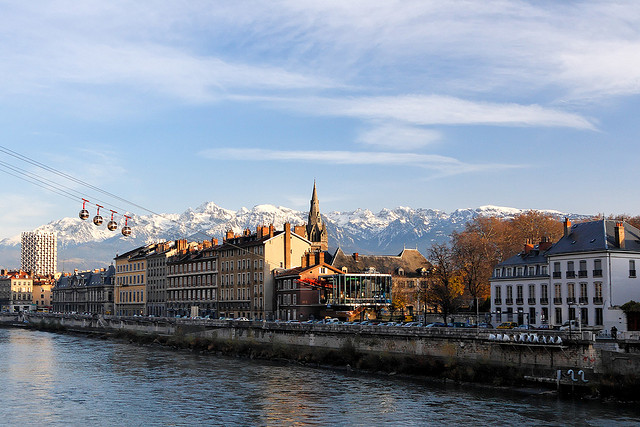 The race continues in the southeast quarter of France, just North of the French Riviera, where gorgeous landscapes and idyllic sceneries reign. Beginning in Valence, cyclists will pass through 10 cities before departing for Île-de-France.

Top sights: The Alps and its numerous ski resorts in Pra Loup, La Toussuire, Modane, and Alpe d’Huez. Don’t forget to sample authentic fondue and raclette.
Insider tip: In summer, these ski towns turn into hiking and camping grounds. Most also have numerous cycling trails (some which are quite mountainous and not for the faint of heart).
Potential day trip: Bordering Switzerland and Italy, Chamonix offers spectacular views of the Mont Blanc.
Bus tip: The route from Rhône-Alpes to Île-de-France comprises classic French countryside views.

The Tour de France comes to a close on July 26th at the Champs-Élysées. Just before the finale, cyclists will pass through Sèvres. With a number of bicycle paths, it’s only a 55-minute bike ride from Paris.

Top sights: The National Ceramics Museum in Sèvres, along with Shakespeare & Company, Café de Flore, and the Centre Pompidou in Paris.
Insider tip: Once you’ve climbed the Eiffel Tower, idled by the Seine, and admired the Arc de Triomphe, head over to Montmartre, followed by the Canal Saint-Martin area to find some trendy spots in true “bobo” fashion. Do like the locals do and brunch at Holybelly, shop along the canal, and try the newest hotspot, Brasserie Barbès, near the Sacré-Coeur.
Potential day trip: Awaken your inner child and stop off in Disneyland. Located in Marne-la-Vallée just 30 minutes east of the French capital, Europe’s Disneyland attracts visitors from all over the continent.
Bus tip: Unlike traveling by plane, taking the bus means you can begin sightseeing the minute you arrive at your destination. Did you know that one of Paris’ main bus terminals, Bercy, is just a 20-minute metro ride away from the Louvre?

We hope you enjoyed our guide and don’t forget to enter the contest!