It’s the stuff dreams are made of: the luxury tour bus, the open road, and the legions of fans waiting in every city. The life of a professional musician means a life on the go, as the band travels around the country to perform. But where do all these musicians go? We mapped their routes to find out which types of bands travel where. Do country singers stick to the South? Do alternative bands frequent the West Coast? We break it down below.

When you think of today’s top performers, what do you picture? Chart-topping hip-hop artists? Popular alternative bands? These results might surprise you. Out of 4,000 live shows in 2015, we found that country singers put on the most frequent concerts – nearly 500 shows. The second-most frequent performer type was rock/oldies (476 shows), followed by alternative (468 performances).

Latin bands held the fewest performances (254), followed by EDM/electronica (with 294 concerts) and R&B/soul (with 330 shows). Mapping each state’s top music genre based on performances reveals some surprises. Forget the South – country singers are making it big mainly in parts of the Midwest and East, as well as in Idaho and Utah. (Alabama and Arkansas are the only two Southern states where country ranks first).

Indie rock tops the performance rates in 10 states spread across the country. Middle America – along with outliers Arizona and Connecticut – is the place to go for hard rock/metal. Rock/oldies concerts dominate a good portion of the East, only extending as far west as Louisiana. Alternative bands make the most visits in only five states, but their reach extends from coast to coast – Oregon to Maine.

What about the least prevalent genres? R&B/Soul is the top genre in only Hawaii. Nevada is the only state featuring abundant electronica/EDM performances (hello, Las Vegas!), just California favors pop, and only Texas and Florida hold sway when it comes to Latin music. Next, we mapped the top artist for performances in each state. Adele is a frequent performer in numerous states, including Michigan, Arizona, Colorado, and Texas, although her music doesn’t match the most popular genres that visit all those areas. Alternative artists are the most common performers in Montana, but the most frequent visitor is country singer Luke Bryan. Justin Bieber is the top performer in several Midwestern states, despite the fact that pop performers aren’t the most common visitors. In some states, though, the top artists correlate with the top genre. For instance, Billy Joel is a frequent performer in New York, where rock/oldies performances reign. 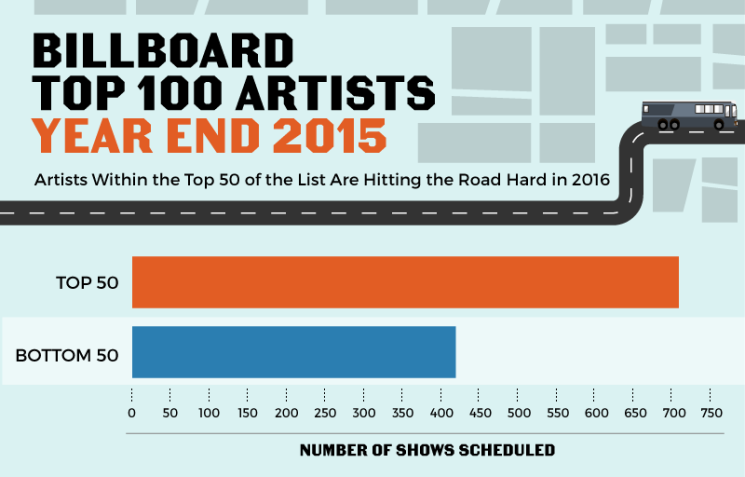 You might think the bottom 50 artists would tour more in an attempt to find greater exposure and success, but that’s not the case. Breaking down the top 50 and bottom 50 artists reveals that the top artists have scheduled over 700 shows, while the bottom artists scheduled fewer than 450. Perhaps the reason is as simple as supply and demand – after all, it stands to reason that the more popular artists are, the more venues want to book them. We looked at a selection of top artists to see how their upcoming tour schedule compares with 2015’s dates. Interestingly, only one of the 10 plans to increase the number of shows in 2016: Aussie sensation 5 Seconds of Summer is riding the wave of fame, adding 22 more shows than last year. However, other bands may book fewer tours for various reasons, whether to focus on writing and recording or simply take it easy after a jam-packed year.

GET IN THE GROOVE

Is there a band or performer you’ve always wanted to see? Whether you prefer to sing along to oldies, rock out to metal, or samba to Latin music, you should have plenty of opportunity to attend a live show – if not in your city, then in one not too far away. Grab a friend, pack your backpack, and hit the road. Don’t feel like driving? Plan your route at BusBud.com, and you can focus on what really matters – good conversation, great snacks, and your favorite songs on your portable music player.

Music genre was determined primarily by Billboard Music Charts; however, there are instances where other sources were used (see sources section).

America’s Hardest-Working Music Genre: We took the sum of shows published on bandsintown.com for each artist for 2015 to determine which artists and genres are performing most. Data was collected from bandsintown.com on October 4, 2015 and included tour dates for the US and Canada listed between the dates of January 1 and October 4, 2015.

Top Artist by State: We looked at the Billboard Top Artists Year End 2015 list and then looked at each artist’s website to determine if they were touring in 2016. The tour schedule of each touring artist was recorded and the artist with the most shows in each state was deemed the winner of that state. Alaska, Hawaii, and Vermont yielded no data. In some cases the artists website did not have all dates, so tour dates were taken from Bandsintown.com instead.

Billboard Top Artists Year End 2015: We looked at all artists touring on the Billboard Top Artists Year End 2015 list and put each artist in the Top 50 or Bottom 50 category based on their rank on the list. We then looked at their website to determine how many shows are scheduled for 2016. We added the number of shows for all artists in each category find out which group is touring more in 2016.

Number of Shows for Selected Artists 2015 Vs. 2016: We looked at the artist’s past schedule for 2015 tour dates and compared it with their 2016 tour dates. We selected the artists shown by looking at the top artists on the Billboard Top Artists Year End 2015 list that have tour dates published for 2016 and had tour dates in 2015.

Feel free to share the images found on this page freely. When doing so, please attribute the authors by providing a link back to this page, so your readers can learn more about this project and the related research.