Crying babies on the plane. Bad drivers clogging the road. That sweaty passenger beside you on the train. As much as you may love the destination, there’s no getting around the fact that traveling there can be frustrating, infuriating, and maybe even slightly disgusting.

At Busbud.com, we love hearing about travel experiences – that’s why we invited 2,000 people to spill the details about their biggest travel pet peeves. We asked about trains, planes, automobiles, and yes, buses too – and the results are quite intriguing. Breathe deeply, unclench your fists, and read on to discover the irksome situations you might encounter on your next trip. 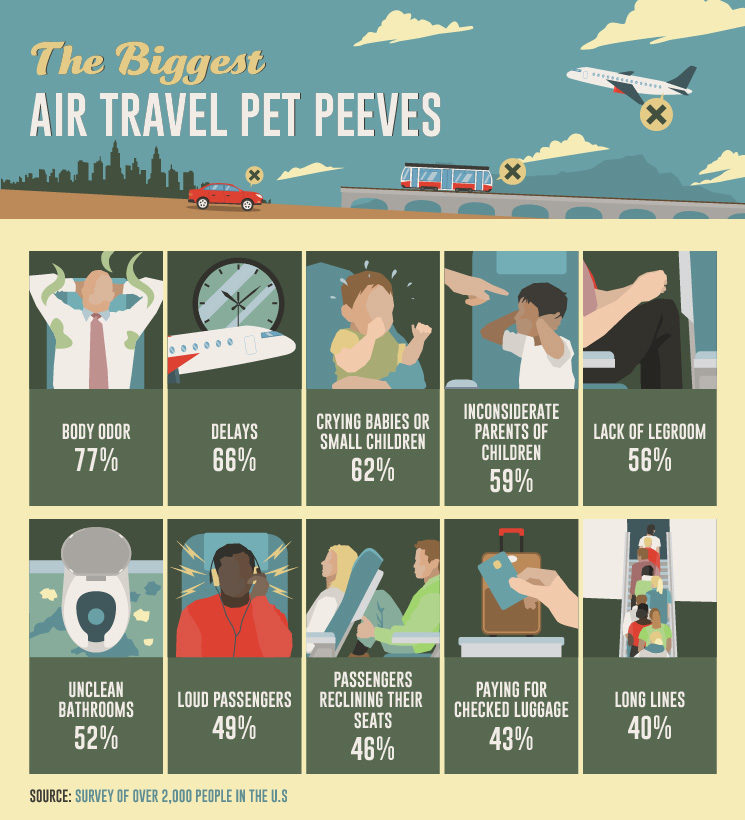 Approximately 895.5 million passengers traveled on U.S.-based flights last year. Although in-flight announcements urge passengers to “sit back, relax, and enjoy the flight,” the enjoyment part may prove challenging for some fliers – whether because of the airplane, the airport, or their fellow travelers.

One complaint soars to the top of the list: 7 out of 10 respondents get their nose out of joint over other passengers’ body odor. Flight delays are the No. 2 annoyance (because there’s nothing like missing the meeting you must attend), and the next two focus on families: crying babies or kids and the obnoxious parents of said kids.

Other complaints relate to the planes (cramped legroom and dirty bathrooms), the passengers (noisy seatmates or people who insist on reclining), and even the airports (pricey luggage fees and long lines).

Unbelievably poor legroom on and Easyjet flight to Palma. Actually can’t sit down OR do up my belt… pic.twitter.com/4A7cbd5jIb

Upgraded my RTX flight to an exit row seat.

NO MORE WILL MY KNEE CAPS BE ATTACKED BY THE PEOPLE RECLINING THEIR SEATS IN FRONT OF ME! 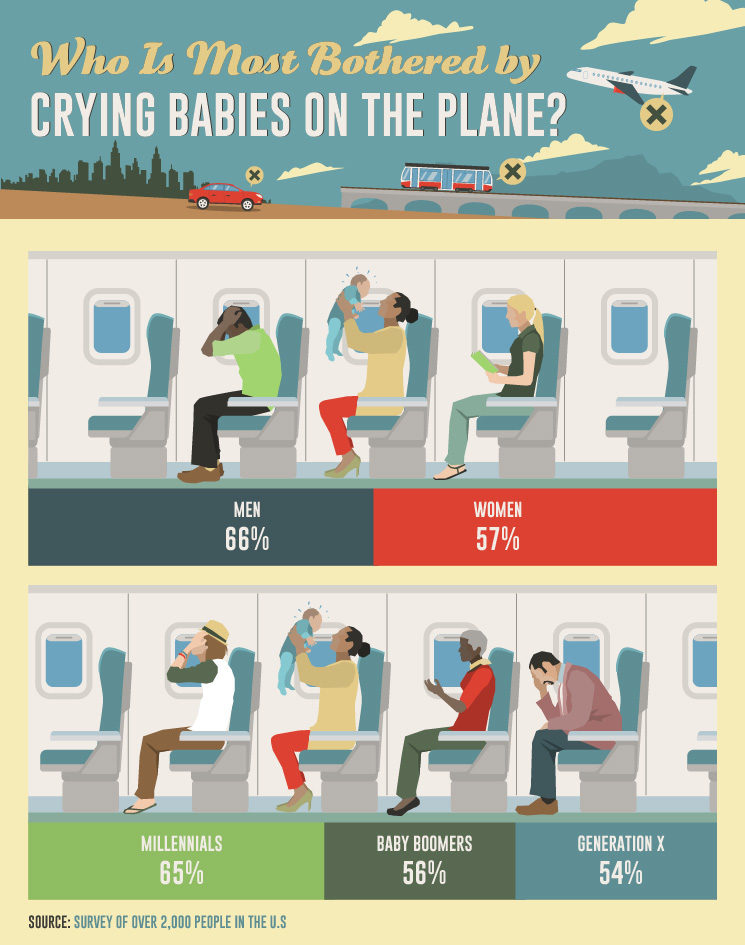 The diaper changes, the sleepless nights, the crying – no one ever said having a baby would be easy. However, plane travel can propel the challenges of parenting to new heights. Whether due to the strange new environment or the pressure on their small ear canals, babies on flights can be particularly fussy – a factor that annoys well over half of fellow fliers.

This is how I feel about my 6:30am flight, people yelling and this baby crying pic.twitter.com/UzqsOT6Vij

While some passengers look on with sympathy, others become downright annoyed. Who’s the most bothered? Men have less patience for crying infants than women, and Millennials get more annoyed than Baby Boomers and Generation Xers.

Not a fan of noise? Remember to pack earplugs – and take note of one airline’s fun solution: JetBlue recently offered 25 percent off a passenger’s flight each time a baby cried. Not surprisingly, the infant’s’ wails were met with cheers rather than sighs.

On the Road … Annoyed 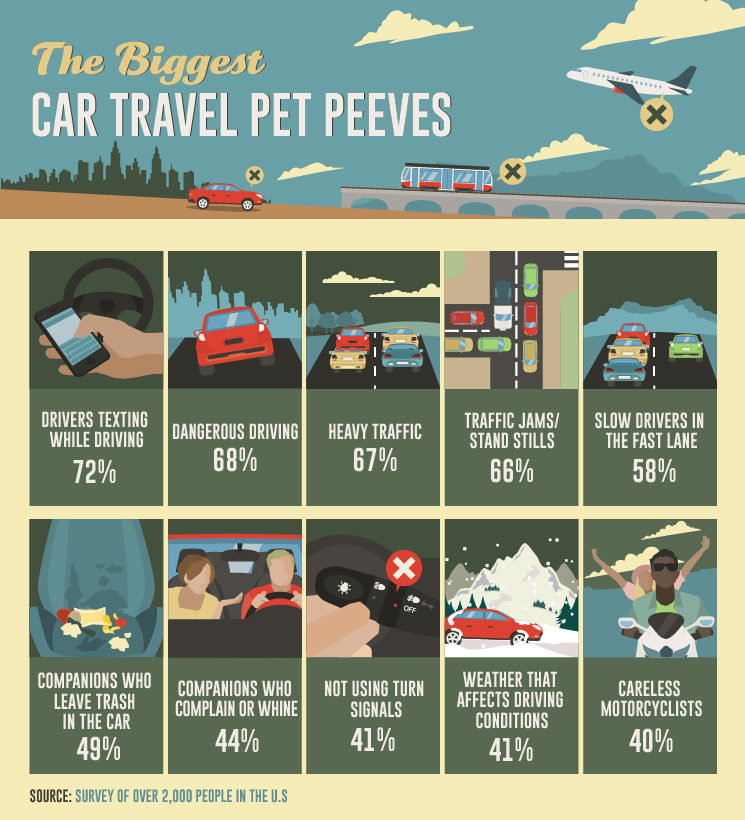 Music up, windows down, snacks taking up an entire seat – for the 214 million licensed drivers in the United States, a road trip may sound like a dream come true. But it turns out the road to your destination may be paved with exasperating situations.

But it’s not just other drivers and vehicles causing bumps in the road. Almost as annoying are both travel companions who litter the car with trash and those who recite a litany of complaints. Nasty weather and careless motorcycle riders also bug road trippers.

It cost $0 to use your turn signals

Turn signals! Crazy things! You should try them!

If you don’t use your turn signals I’m gonna assume automatically that you are a douchebag in every aspect of your life.

Put Down the Phone They comment on Facebook statuses, double-tap Instagram photos, and send their friends heart-eyes emojis – all while steering a 4,000-pound vehicle. Motorists who text and drive are more than a pet peeve. They’re 23 times more likely to crash than attentive drivers, which makes them a danger to everyone on the road.

when ur friend is texting and driving and swerves into another lane then looks at you and just says “my bad” pic.twitter.com/HX3wdRhwTT

Among every part of the country, people in the Mountain region are the most annoyed by texting motorists – perhaps due to the winding roads, abundance of wildlife, and (in some states) higher-than-average speed limits. Ironically, Arizona and Montana are two of the only four states that don’t ban texting and driving.

I fully endorse naming and shaming texting drivers without limit. I don’t care if you lose your driving job. Someone else could lose a life.

On the other hand, motorists in the East South Central region – where texting while operating a vehicle is illegal – are the least bothered by people who tap messages to friends while they drive. (Perhaps it’s a case of good old-fashioned Southern kindness, manners, and poise?)

All Aboard the Annoyance Express 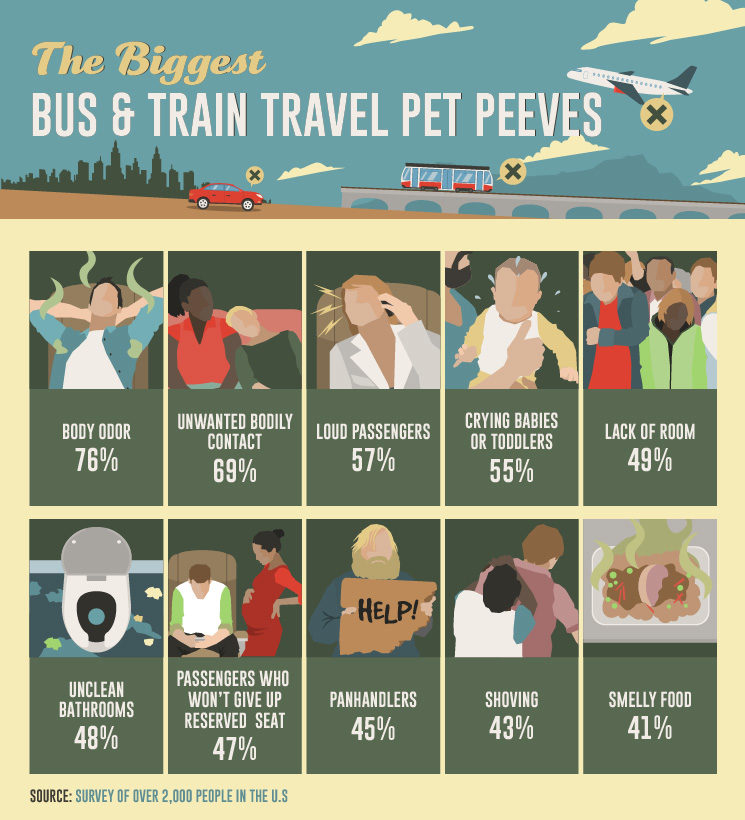 Plug your nose – it’s the airplane all over again. Among the travelers we surveyed, nearly 8 in 10 say passengers’ body odor is the worst part of a bus or train trip. The other top complaints also center on fellow passengers: unwanted touching, noisy travelers, and crying babies.

It should be illegal to eat a tuna sandwich on a crowded night bus. ?

The vehicles themselves also draw complaints both for their cramped quarters and less-than-spotless bathrooms. Rudeness claims the next two spots: travelers who won’t give up their seats to people who could use them more and passengers who push and shove. Finally, if you can smell anything beyond the body odor, it turns out you might notice the odors of other passengers’ meals. (Tuna sandwich, anyone?)

Hands off the Passengers 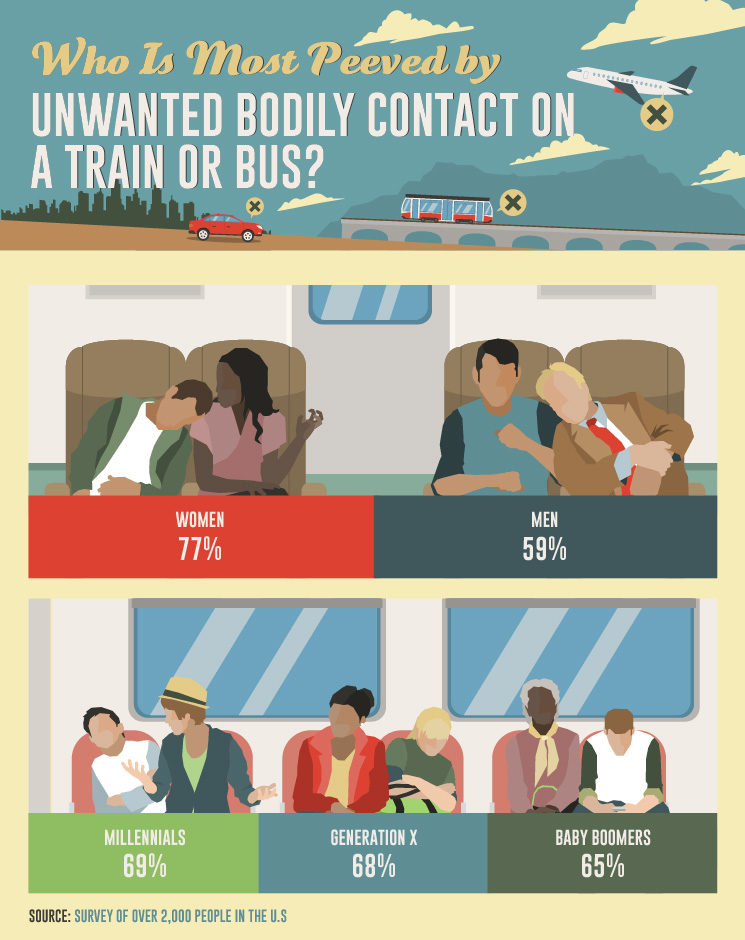 Being touched against your will can cause discomfort in any situation, but it can be downright infuriating on a crowded bus or train. Nearly 8 in 10 women report they can’t stand it when passengers brush against them, while fewer than 6 in 10 men say they mind.

Either the guy next to me on the train fancies me or he likes close body contact. #pleasemove

Of any generation, Millennials are most bothered by unwanted touching (almost 7 in 10 say it’s annoying), while Generation Xers and Baby Boomers aren’t quite as bugged by unexpected physical contact.

And it’s not just the passengers who get grumpy about being touched. One train conductor penned an anonymous essay about his own pet peeves while riding the rails: “I might seem nice,” he wrote, “but don’t touch me.” He also noted that passengers sometimes lick their fingers or chew on their tickets before handing them over – talk about unwanted touching. Ride-hailing services are a relatively new addition to the travel scene. Although they’re convenient, affordable, and potentially life-saving for those who would otherwise drink and drive, they’re not without their flaws. Our survey respondents had a litany of complaints about driver behavior. The top three: driving dangerously, getting lost, and acting disrespectful.

Passengers also get annoyed with drivers who drop them off before their destination or in the wrong spot as well as those who take the scenic route and talk their ear off. There are relatively few complaints about the vehicles themselves: Around half of respondents say they’re too hot in a car without air conditioning, while 3 in 10 are too cold in a car without heat. (It’s exactly how Goldilocks felt about her porridge.)

when the uber driver doesn’t talk to you pic.twitter.com/iasyLdxN5b

But that’s not the whole story. It turns out drivers have their own set of pet peeves about passengers. Want to delight your ride-share driver? Don’t keep them waiting, never cancel at the last minute, don’t touch their gadgets, and leave the messy food and drinks at home. And if your trip is acceptable, remember to leave a good rating and offer a tip. Oh, and they probably don’t mind public tweets of affection.

last night I had a really hot Lyft driver and then today I saw him at the car wash and he said hi… hey @lyft will you tell him to call me?

Travel is fraught with annoyances – from bad drivers to unpleasant smells. We posed pairs of less-than-ideal scenarios and asked respondents to select the lesser of two evils.

During a flight, people prefer a raised window shade to a lowered one and a comedic attendant to one who is neglectful of their needs – and they’d go without Wi-Fi rather than give up movies and music. Bus and train passengers are more annoyed by panhandlers than performers, smelly food over sneezing and coughing travelers, and shovers rather than pole hogs.

Due to the lack of inflight entertainment, my lil sis & I had to resort to playing w this dice we found on the floor pic.twitter.com/qz5POhIPoE

In the car, too many bathroom breaks is worse than not enough, no headlights is worse than blinking hazards, and fast drivers in the slow lane are preferable to snails in the fast lane. And ride-hailing passengers value water over snacks, a silent driver over a talkative one, and drivers who pull up on the wrong side of the road rather than drop them off before their final destination.

When You’re the One Being Annoying 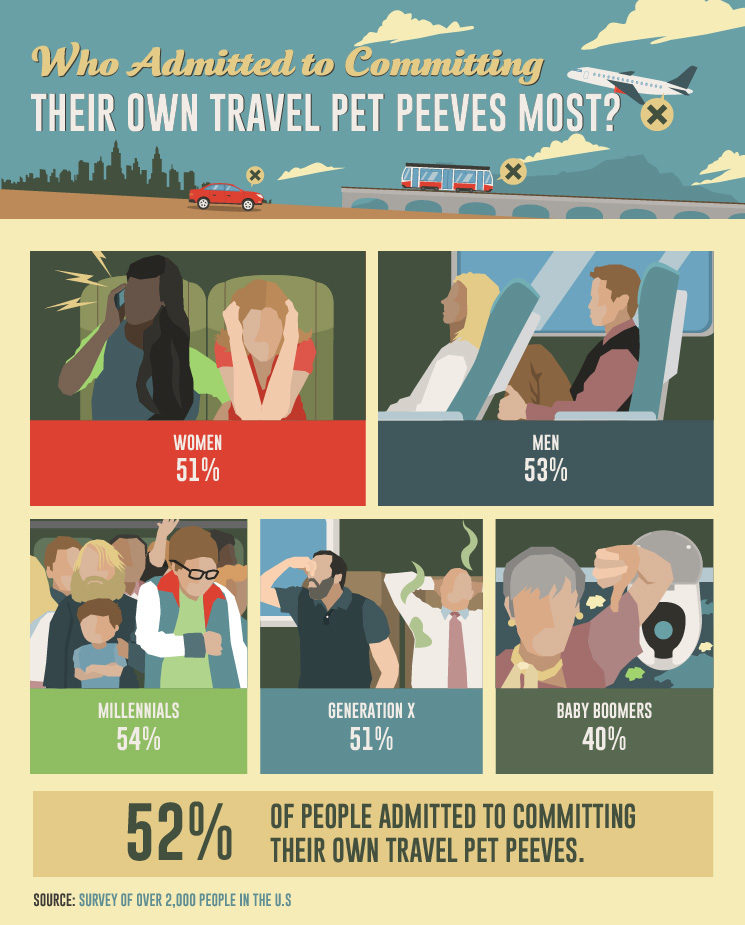 Admit it – your fellow passengers, drivers, and travel professionals aren’t the only ones who can be a pain. We asked our respondents to ’fess up to their own bad behavior while traveling, and the results were surprising. Just over half of participants say they’ve engaged in obnoxious behavior, with men being slightly more likely than women to do so. Over half of Millennials and Gen Xers admit to questionable travel etiquette, but only 4 in 10 Baby Boomers cop to bad manners.

strategically finishing eating my tuna sandwich before boarding the bus

There’s little doubt that each type of travel has unique pros and cons – and sometimes the cons come in the form of wailing infants, smelly seatmates, traffic jams, and chatty drivers.

But despite the drawbacks, you can still enjoy the trip if you plan accordingly. Put on your headphones (and pair them with a sensible volume), get comfortable (but not too comfortable), and lose yourself in your favorite book or magazine. Worst-case scenario, just think of the stories you’ll have for your friends!

If you want to skip the hassles and high costs of many types of travel, consider taking a bus. With Busbud.com, you can quickly compare schedules and companies and then book your tickets online. Plan your trip, pack your bags – but maybe leave that tuna sandwich at home.

You are encouraged to use the graphics and information from this project. If you do, please acknowledge our authors and link back to this page as well as www.busbud.com.