As part of our data series examining numbers travelers care about, we partnered with Yelp to give you the definitive food ranking for the United States.

If there’s one thing that Americans love to argue about (politics aside), it’s whose home state makes a better fill-in-the-blank. On the burger front, Californians will advocate ad nauseum for In-N-Out, while Midwesterners hold true to their beloved Steak ’n Shake. With pizza, the debate rages between deep-dish in Chicago and the thin crust of New York City. But which states and cities boast cuisine that restaurant-goers rate highest, and what are their specialties?

To get a better idea, we dove into the data from more than 600,000 Yelp reviews across the United States and sorted them by location, average review score, and cuisine type. Our results may not settle any foodie debates once and for all – after all, they’re affected by everything from the number of restaurants in a city to the frequency with which local diners use Yelp. However, our findings offer some interesting food for thought – not to mention countless reasons to sample various types of cuisine across the country. Take a look at what we learned from Yelp. 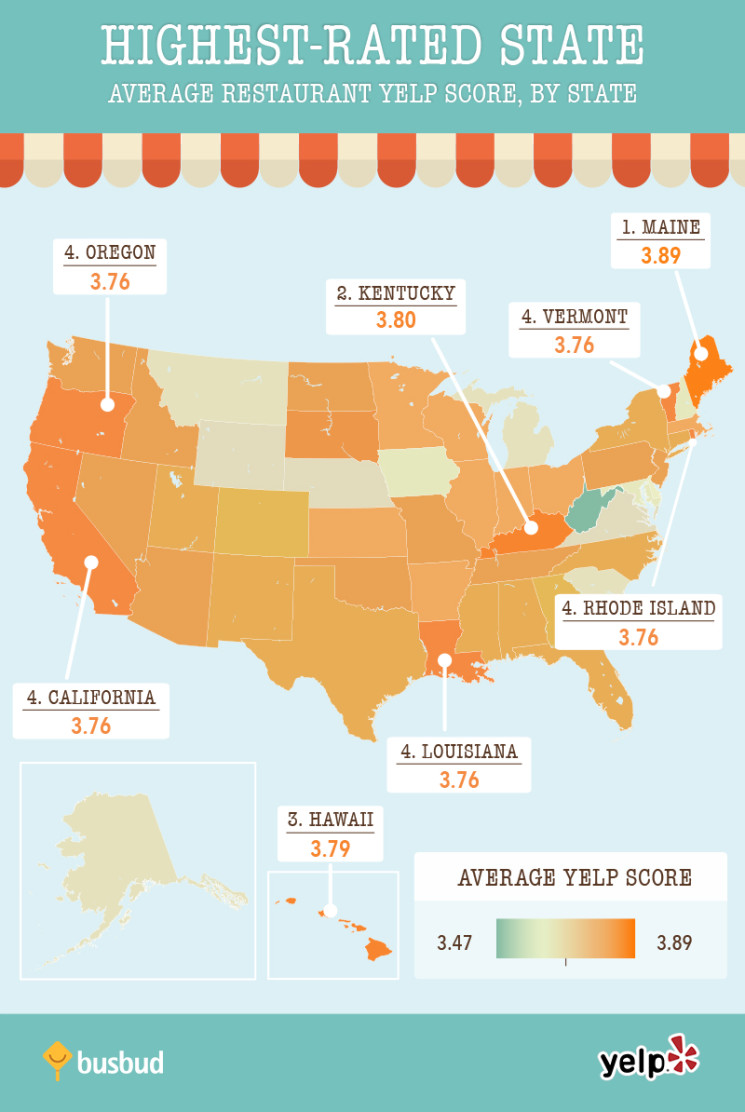 Overall, Maine took top billing with an average Yelp restaurant score of 3.89. Does that surprise you? Just consider the fact that the state celebrated not one but two official Lobster Days in 2015 – plus the crustaceous delicacy is available by mail order for out-of-towners who just can’t get enough.

Kentucky at No. 2 also makes sense when you consider it’s the birthplace of the Colonel’s Kentucky Fried Chicken and the legendary Hot Brown sandwich. Third-place Hawaii offers numerous delicacies embraced by residents and visitors alike – poi (a low-cal staple made from taro root, Kalua pig (aka roasted pork), and savory poké (chunks of marinated food, most often tuna). Tied for fourth is an array of geographically diverse states: Oregon, Vermont, California, Louisiana, and Rhode Island.

One thing is clear – the American restaurant market offers unimaginable variety (fried rattlesnake, anyone?). Overall, five cuisines drew the highest rankings on average across the states – Spanish, Mediterranean, Indian, Greek, and American – but plenty of other options abound. Examining the specific states home to the highest-rated cuisines reveals an interesting snapshot. California sweeps three categories (Mediterranean, French, and Mexican), as does Hawaii (sushi, Thai, and Chinese). Arizona takes the top honors for both Greek and Indian cuisine. The highest-rated category overall is Mediterranean fare in California.

Are these states simply home to more talented chefs? Not necessarily. Keep in mind that the varying popularity of Yelp coupled with the number of restaurants in each state may affect these results. For instance, if one state has a low number of restaurants that serve a certain type of cuisine, it doesn’t take many good reviews to boost the ratings immensely – though your odds of enjoying an excellent meal in that state remain high.

Our data paint an interesting picture of which states are quite versatile when it comes to cuisine:
The big winner is Hawaii, which is a top-five state for Chinese, Italian, Japanese, Mexican, sushi, and Thai. California shows up in the top five for four different categories of food, and numerous states each fare well in three.

If Yelp reviews teach us anything, it’s that fantastic food can sometimes be found in the most unexpected of places – think incredible Indian cuisine in Arizona and top-notch Japanese food in Oregon. However, as previously mentioned, the number of restaurants in each state plays a role in average ratings, not to mention diners’ expectations and the frequency with which people write reviews on Yelp.

California may come in fourth overall on the list of top states by average restaurant review, but it completely devours the competition on the city level. Of the 10 highest-reviewed food towns, nine of them are in California, with both NorCal and SoCal represented. Only Portland, Oregon, widely known for its foodie culture, managed to disrupt the Golden State’s dominance.

Top city Santa Rosa – the largest city in Sonoma county – is a haven for foodies. Tourists and locals alike flock to the area to sample the best of wine country cuisine, featuring locally sourced ingredients and innovative food pairings – not to mention the plethora of international cuisine options. Home to more restaurants per capita than New York, No. 2 spot Pasadena is a draw for diners thanks to its talented culinary professionals and international influences.

If you’re looking for a tasty meal, we’ve got two words for you: California Mediterranean. Of the top 20 foods on Yelp, a staggering 15 were Mediterranean and 16 were located in California. California is one of only six places in the world (and the only location in the United States) that boasts a Mediterranean climate – plus its residents tend to be health-conscious. Mediterranean fare is simply prepared and heavy on healthful ingredients – think vegetables, grains, seeds, nuts, and olive oil – many of which are grown locally. Gather your friends, sip a glass of red wine, and linger over your meal as long as you’d like.

So what does all this mean? You can find good food just about anywhere if you know where to look. You can find good sushi not only in Hawaii, but in Wisconsin and Louisiana as well. If you’re craving paella, skip the impulsive trip to Barcelona – because Washington state and North Carolina both boast tasty Spanish cuisine. Seek culinary adventure, be open to possibilities, and don’t forget to pen a review on Yelp after your meal. Bon appetit!

Using the Yelp API, we obtained over 600,000 Yelp ratings of restaurants in some of the most popular cities across the United States and then compared the average score of different cuisine types to find out what the best types of cuisine were across the country and where to go for the highest-rated dish of a particular type.

Note: This study is not meant to draw conclusions about quality of food in any of these locations. The number of restaurants and Yelp reviews vary in every city and state, which causes fluctuations in the average Yelp ratings.

We grant permission to use the images you find on this page freely. When doing so, please link back to this page so others can explore the full project and methodology.