If you’ve ever spent a few weeks in Brazil, you know that travelling by bus is the most popular mode of transportation and the most efficient way to travel between Brazil’s biggest cities. Both tourists and locals prefer taking the bus over the less developed railway systems and the more expensive and less convenient option of air travel.

One of the most dynamic markets in the world

To keep up with the demand of commuting travellers (and perhaps to increase it), Brazil’s bus market has developed at an astounding rate. With hundreds of bus companies now coexisting on Brazil’s busy roads, bus terminals in Novo Rio and Tietê, to name a few, are more chaotic than ever before.

Brazil’s national ground transport agency known as ANTT has granted at least 280 licenses to bus companies, giving them the right to operate on the roads of South America’s largest country. This has led to a highly fragmented market in which unfamiliar tourists can easily become frazzled by the overwhelming amount of options.

South America and Brazil are particularly close to our hearts because this is where the idea of Busbud was born. LP Maurice, now CEO of the company, drafted out the business plan while on a bus between Argentina and Brazil. In fact, his story was the subject of a major ad campaign in Quebec aimed at promoting entrepreneurship.

In our latest analyses on bus prices in France, we compared average bus costs in several countries across the globe and guess what? Brazil was at the top of the list for most expensive. In Brazil, imported products (such as iPhones) are often more expensive than anywhere else, however we did not expect this to apply to a standard bus ticket — a local commodity that is so often relied on.

We thought it’d be helpful to provide a more in-depth analysis of bus costs in Brazil.

Four classes of comfort and service

Cost averages are not an accurate representation of the Brazilian bus market. Unlike Europe and North America, Brazil has four different classes of service available aboard every bus.

For years, local bus companies operated within a very competitive market. Instead of competing solely through the cost of a ticket, operators started to divide the traveller’s experience into distinct classes of comfort and services. Whether this means different levels of service within the same bus (much like the business class on planes) or having completely separate fleets, Brazilian companies always offer four travel classes to choose from.

The ANTT proposed the following categories, each having a specific set of criteria generally respected by operators:

This is the cheapest and most popular class. There is about 70 cm of space between seats which all recline at a maximum 35 degree angle. This bus is likely to have a bathroom on board; however, this is not guaranteed when travelling short distances.

All buses in the Executivo class must be equipped with bathrooms, air conditioning, an entertainment system and a mini bar offering hot and cold beverages. The seats are also slightly deeper and more comfortable: they can recline up to a 40 degree angle with approximately 80 cm of space between them.

These buses offer the same services as the Executivo class but with seats that are even more comfortable. They are larger in size and can recline at a 55 degree angle. There is 90 cm of space between them and lastly, they each have their own footrest.

The Leito or Cama class (meaning “bed” in Portuguese) is synonymous with first class. All seats
can recline at an 80 degree angle (practically to a sleeping position) and pillows and blankets are provided to all passengers. More services are offered by agents on board such as snacks, beverages and individual entertainment systems. There is 105 cm of space between seats and only three rows in total (instead of the usual four). Busbud collected data from hundreds of thousands of online searches by users looking to travel within Brazil and was able to measure the average hourly cost of bus travel for each class and their frequency of use.


Travellers seeking the level of comfort offered in the Leito class will pay twice as much as they would in the Convencional class. A good variety of comfort options helps to fulfill every traveller’s needs. Low-budget backpackers or students travelling to visit their family can benefit from lower prices, whereas Brazilian business travellers and tourists who like to prioritize comfort can pay more for better seating. Catering to more high-end needs also works in favour of bus operators who get to make more revenue. The table below compares the average cost of a single ticket in the Convencional and Leito class for 10 of the most popular journeys in Brazil. All four classes are available on each of these trips.


The Leito class is more affordable on some trips than others. For example, Rio – Campos, São Paulo – Foz do Iguaçu and Curitiba – Cascavel are definitely worth the cost. But Curitiba – Fiorianopolis, Rio – São Paolo and São Paulo – Fioranopolis cost more if you are sitting in the Leito class. So if travel time isn’t too long, opting for the Convencional class will save you quite a bit of money. Among the 80 or so Brazilian operators working with Busbud, only 12 of them offer all four service classes. This is mostly because certain operators can choose to offer only the shorter journeys and therefore only offer one or two classes. The 12 operators that do offer all four classes are also the ones who offer a wider selection of destinations.

We calculated the average cost per hour of bus travel for each class and for each operator.


These significant prices differences (sometimes even doubled!) between companies shows us once again how diversified and mature the bus market is. Companies offering lower rates for the Convencional class does not mean they do the same for others like the Leito and vice versa. This could very well be a pricing strategy used to entice people towards one category and build customer loyalty before trying to catch up through profits from the other classes.

But still, we’ve noticed that Expresso Guanabara, Util, Águia Branca and Viação Penha are often the least expensive overall, while companies like Cometa, Itapemirim, Auto Viação 1001, Expresso do Sul and Expresso Brasileiro are at the other end of the spectrum among the most expensive. According to reports from Google Trends, 1001, Itapemirim and Cometa are the most recognized brands and could easily capitalize on their notoriety by slightly increasing prices.

With such a wide range of companies, classes and prices, we can see why Brazilians much prefer using bus aggregators like Busbud. 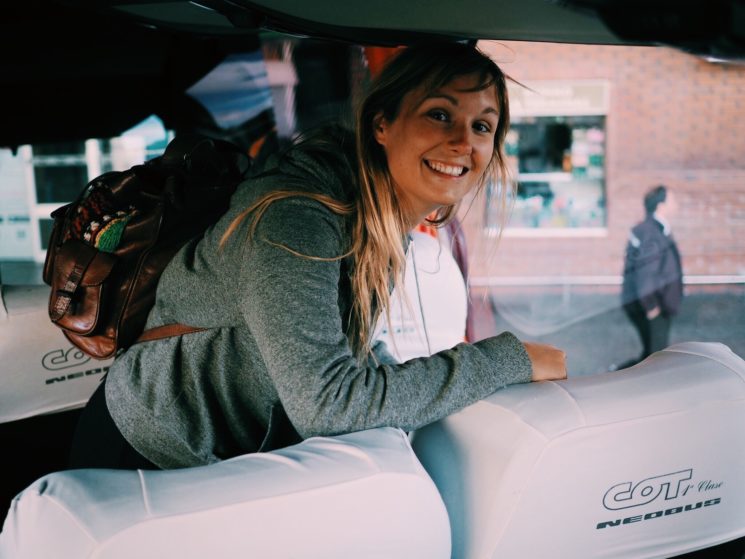 Do as the locals do

To find out if this variety in options appealed to Brazilians, we simply reached out and asked them directly. With the help of Google Consumer Surveys, we surveyed more than 1000 locals on their class preferences.

Which class would you choose if you had to travel by bus from Rio de Janeiro to São Paulo (a 6h trip)?

We presented them with all four options including each of their average ticket costs for Rio – São Paulo.


70% of internet users in Brazil seem to be familiar with the different bus classes available to them. The distribution of class preference seems to be fairly balanced, even with a quarter of participants preferring to travel in first class. The disparity in class preference is immediately apparent with the different age groups. People aged between 18 and 24 seem less aware that the four classes even exist and they are also probably more cost-conscious.

This distribution does not represent the actual numbers we have for Rio- São Paulo trips. In fact, 55% of the results served to Busbud users are for the Convencional class for this specific route, compared to 30% of people who would travel with that class (from our survey).

The reasons for this are simple. First, there is only a 66% rate of internet access within Brazil and so maybe non-connected travellers prefer the less expensive classes. Second, our survey audience was the general population which probably included people who never really travel by bus.

Ridesharing makes its way to Brazil

In our last analysis of the French market, ridesharing played a significant role in the intercity transport scheme. Although it is considered to be quite different than taking the bus, people are still interested in finding out how the two options compare in terms of pricing.


In France, taking the bus was found to be 34% cheaper than ridesharing. We looked at travel costs for hundreds of trips offered by the biggest ridesharing company in Brazil and the results were quite different: ridesharing was on average 32% cheaper than the Convencional class!

Ridesharing is better established in France with prices matching those of current market trends, however the bus market is still quite young and in the midst of a price war. This is the opposite trend in Brazil where the bus market is more mature and where carpooling hardly fuels any interest. BlaBlaCar recently celebrated their first 10 million km of travelled road in Brazil.

The future of ridesharing in Brazil appears promising. Services and applications like BlaBlaCar could rapidly gain popularity and potentially pressure bus companies to lower their prices. Conclusion? Exploring Brazil by bus is not more expensive than anywhere else

Our comparative analysis shows that Brazil is actually not that expensive! One hour of bus travelling in the Convencional class costs on average $4.50 which isn’t too far from the $3.90 price floor in France for essentially the same service. But intercity bus transport in Brazil is without a doubt the most diversified and the most developed. It definitely sets an example for European markets who will have to quickly adapt and diversify their business model and for North America who is always looking to widen their customer base.

All photos used in this article are from a trip taken by our good friends Stef & Joe from the hiato blog. Read the thoughts of these two Londoners in a recent interview on exploring South America and their bus trip from Rio de Janeiro to Florianopolis!