Summer is over and school is back in session. So what will you do with your free weekends – plan an escape from classroom schedules and lengthy labs, all-nighters and financial aid paperwork?

How about taking the ultimate road trip, heading to a city with cheap eats, sunny weather, and lots of bars?

Since a major portion of Busbud customers are college students itching to travel and share new experiences, we did a little research to come up with the best U.S. cities for a college road trip. We ranked them based on the cost of an Airbnb rental, an inexpensive meal, a beer, and a gallon of gas, plus the number of restaurants, bars, things to do, and sunny days each year.

If you’ve got a free weekend, here are the cities that rocketed straight to the top of our road-trip-worthy list. San Antonio, Texas, is at the top of our list because of its hardcore music scene, unbelievable Tex-Mex, and pretty River Walk. It’s also where you’ll find the cheapest beer of any city we ranked.

Next up? Sunny Tucson, Ariz., where you’ll find whole forests of the famous saguaro cactus and some of the cheapest taco stands in the country. Tucson ties with Houston, Texas – a city with a hip bar scene that will surprise and delight you.

Texas and Arizona too far from your home base? You’ll find plenty of gems in the East – like Atlanta, Ga., home of Southern hospitality and a thriving music scene, and Charlotte, N.C., with its pretty historic neighborhoods and popular Gallery Crawl in the historic arts district, Castleberry Hill.

Plan Your Trip, by Interest Looking for the city with the cheapest eats? The best gas prices? The most bars? Look no further. The city with the best Airbnb prices is El Paso, Texas. You’ll find the least expensive meals in Louisville, Ky. If drinking draft beer is your goal, San Antonio boasts the most reasonable brews on tap.

If it’s sunshine you’re after, Phoenix, Las Vegas, and Tucson are your best bets. Although it’s certainly not the cheapest option, New York City hits the trifecta with the most things to do, most restaurants, and most bars. Going to school out West and don’t have the time (or gas money) to make it all the way to Kentucky? No worries. We’ve split up our best cities by region, too.

Tucson and Phoenix take home the prizes for best destinations in the Western region. With nearly year-round sunshine and cheap, excellent Mexican food, these cities are hard to beat.

Columbus, Ohio, is our top Midwest city because of its budget-friendly $3 domestic beer drafts. Warm, sunny San Antonio and Houston top the rankings in the South. And the city of brotherly love, Philadelphia, beats New York City for the number one spot in the Northeast. 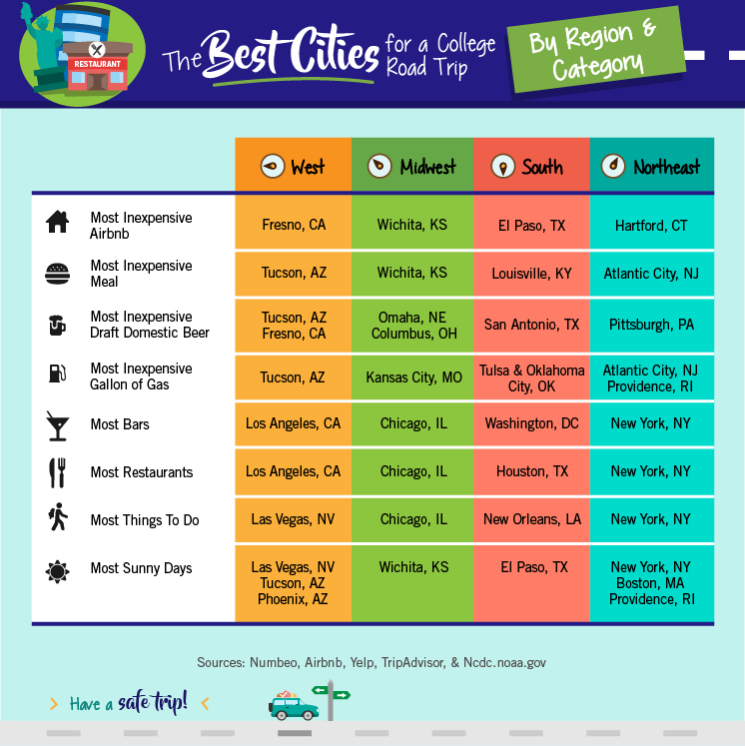 Looking for the best beer prices in the West, the cheapest Airbnb rentals in the Northeast, or the greatest number of sunny days in the Midwest? We’ve got you covered. Not only did we rank our cities by region, but we ranked our regional cities by interest as well.

For the cheapest Airbnb rentals in the West, look no further than Fresno, Calif. If it’s the sunniest city in the South you’re after, El Paso tops the rankings. And the cheapest beer in the Northeast? You’ll find that in Pittsburgh.

Cities with More Bang for Your Buck Road trips are great, but they’re definitely better when they don’t interfere with paying your tuition. That’s why we mined our data to find the best – and cheapest – cities worth the drive.

San Antonio, Oklahoma City, and Tucson also came in cheaper than most, with gas prices under $2 a gallon and beer maxing out at $3.50.

Gassing Up & Spending the Night We’ve set aside the cheap beers (don’t worry, we’ll pick them back up later) to find out which cities are cheapest to stay for a quick overnight. We did that math, too, and Oklahoma came out on top, with Tulsa and Oklahoma City gas prices around $1.85 and Airbnb rentals at $73 and $86 averages, respectively. Now, if food is your goal (and whose goal isn’t great food?), we’ve also ranked our cities based on the average cost of a cheap meal out and the number of restaurants the city boasts.

By these metrics, top destinations are San Antonio, Philadelphia, and Atlanta. Austin and Dallas are next on the list, making Texas the state with the most cities for college students to chow down on a budget. For the beer enthusiasts among us, we also ranked our cities by best draft beer prices and the number of bars. The winning boozehound cities? Phoenix, Houston, and Pittsburgh. The domestic drafts can be had for $3.50 or less, and there are thousands of watering holes to choose from.

Turn Up and Get Tanned Finally, if it’s sunshine you’re after, we also ranked our top cities by their sunny days and the number of things to do while visiting. At the top of the rankings, unsurprisingly, is Las Vegas. More than 85 percent of the year is sunny, and there are well over a thousand attractions to fill those bright days with.

Los Angeles, San Francisco, San Diego, and Tucson also rank highly, with at least a 66 percent chance of sunshine and plenty of attractions to keep your daytime attention.

Whether you are looking for the cheapest beer or the sunniest city, there is the perfect road trip destination waiting for you. All that’s left to do is map your route, toss your bags in the car, and hit the road. Us? We’re already packed.

We then took an average of each city’s ranking for all categories, as well as combinations of different categories to determine the top cities overall and by interest. The data were collected on July 7, 2016, so numbers may have changed since.