Book Southeastern Stages Bus Tickets for your next trip

Our world class team of experts is always here to help.

Get the best available deal by using a promo code to obtain Southeastern Stages discounts on tickets.

On Busbud, you'll be able to find useful information such as Southeastern Stages contact details in case you need to get in touch with them. 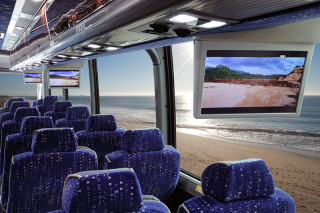 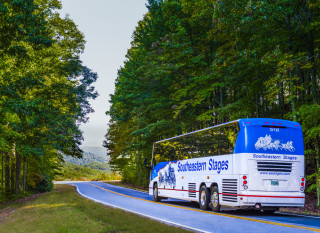 User reviews from travelers who booked their tickets with Southeastern Stages

They driver from Athens to Columbia was amazing. I give her 5 stars. The driver from Columbia to Fayetteville, although his customer service skills were good. I didn't like the fact that he was on his phone the whole time and I felt that some of the content of his conversations were inappropriate.
Athens to Fayetteville

20 October 2022
I had a pleasant experience but two things could be improved. There was a torrential downpour of rain for most of my trip. Water seeped into the coach and dripped from the overhead baggage compartment. Also, I purchased my ticket online but there was no clear info on where the Charleston Station is located. This is not common knowledge for out-of-state travelers. I would certainly travel via Southeastern Stages again.
Charleston to Columbia

30 August 2022
Worst bus experience I've had. The driver was kind, and I don't think this is his fault, but the AC went out on the bus and it's 100+ degrees down there, and he was an hour late then took like an extra fifteen minutes over what it would have taken to get to the bus stop (it took 1 hr 30 and was supposed to take 1 hour 15). If I had been on a remotely tight schedule, I would have been screwed.
Athens to Atlanta

25 June 2022
Bought a ticket from Augusta to Atlanta that departs from Augusta 10:30pm. The bus never came, couldn’t reach any customer service to ask about the bus. Station opened at 11:30pm, staff member said that bus doesn’t exist and gave me a ticket to a bus that leaves 12:15am. Good thing that I had several hours between the bus ride and my plane.
Augusta to Atlanta

5 April 2022
I could not board the bus because my ticket was purchased too late to print it...was not allowed to board!
Columbia to Charleston

15 March 2022
Amazing driver. Please let him know. Going through a hard time, so his warmth was very welcoming on a sad trip.
Atlanta to Columbia

19 January 2022
My driver was exceptionally helpful and courteous. I felt very safe traveling by myself.
Washington to Atlanta

3 June 2021
Never took the bus. At email was not address if the stop. So I was waiting at the McDonald Stop. I am out a citizent who do not live in USA.
Columbia to Charleston

4 March 2020
The drivers were extremely professional and their attitudes were amazing!! 100% I enjoyed my bus ride.
Atlanta to Charleston

17 February 2020
James is an amazing, caring, and entertaining driver. Please give him a raise. Sincerly- the girl with the rainbow hair.
Florence to Asheville

4 February 2020
the bus driver was very nice and did his best to get us in on time, given the circumstances
Atlanta to Augusta

16 January 2020
My 11 year old grandson and I was book to leave to leave on different day when ticket was book for the same day had to return a day earlier to ride back with grandson.
Myrtle Beach to Atlanta

8 January 2020
On the route from Columbia to Atlanta bus made 3 or 4 unscheduled stops, got in to traffic and as a result was late more than 90 minutes. My daughter had to wait form me in not a very comfortable and safe area - Atlanta Bus station.
Charleston to Atlanta

1 December 2019
Bus station was unappealing. Bus arrived more than an hour late. Driver made up time on the drive, which was great.
Greenville to Asheville

28 November 2019
I had a very satisfying experience on my bus ride to Orangeburg, SC. The drivers were very polite and respectful. They drove, safely.
Conyers to Orangeburg

22 November 2019
I could've rented a car with a little extra money and wouldn't have had to go through all that trouble. Also your station at Fort gordon is in a military base and Uber driver's can't get in.
Augusta to Atlanta

6 November 2019
The driver by the name of Teddy was very professional and extremely courteous and pleasant i made the remainder of trip worth it. In comparison to the 1st driver with an attitude
Atlanta to Myrtle Beach

1 November 2019
Excellent experience from start in Charleston’s beautiful bus and train terminal to arrival in Savannah train and bus terminal. The coach itself was clean and comfortable . Appreciated the free WiFi and charging outlet at my seat.
Charleston to Savannah

26 October 2019
The driver did not give notice of departure...several passengers as well as myself we're stranded.
Atlanta to Charleston

23 October 2019
We need more Bus Drivers like Her to me She Set the Rules with us up front and it was a Enjoyable Trip from Atlanta To Athens and The Female Bus Driver was Very Professional.
Atlanta to Athens

4 October 2019
My trip fr Orangeburg to Columbia was fine. However, the driver of bus #332 to Conyers was very rude and disrespectful to the passengers. He was very impatient and spoke very harsh tone yo us. He told us that we couldn't pass has on HIS bus. He said if we had stinky feet we would be walking in the hot sun. I know that no loud talking,& listening to music we're allowed. But some his other rules were outrageous - very unprofessional. I will refuse to ride on a bus with him as the driver, again. He got me to my destination on time but not with the respect & support I expected from a driver of a reputable bus company like this.
Orangeburg to Conyers

26 September 2019
1. Our bus driver was excellent, but the office staff were very deficient. e.g. even the night before my bus was to depart from Charleston, they emailed me to tell me to catch my bus at Dorchester Road. A serious error. It departed from Gaynor Street/Terrace, North Charleston. Inexcusable.
Charleston to Columbia

2 September 2019
I was told to go and get my tickets printed, I asked them to wait and they left me. I had to wait on station for another 5 hours. Just to get on 8pm bus.
Atlanta to Augusta

25 August 2019
I appreciate the fact that it was at the greyhound station. Im glad the bus left a little late so I had time to get there and check in my bag. Our first driver was great, but our second driver was rude, crass, and treated some of the passengers poorly. He kept taking a roll call like we were children and made unnecessarily extremely long announcements full of gross "jokes". Also both the WiFi and power outlets were not working.
Atlanta to Myrtle Beach

15 July 2019
Very punctual schedule and reasonable rates but the ride was rough... needs shocks on the bus; very bumpy couldn’t sleep at all but it got the job done and I made my flight from Atlanta to Tampa and that was my goal 👍
Augusta to Atlanta

5 July 2019
I was never told that the bus station had moved in Charleston therefore I turned up and there was just a piece of paper on the door to say they had moved, despite it still saying that location on my actual ticket. Therefore I was stranded in the wrong place and nearly missed the bus. The staff on the phone were extremely unhelpful. The description of the new location which was taped to the door was incorrect so I spent a lot of money on Uber’s attempting to find it. Disgrace. The bus as usual was dirty. However Andrew Anderson the bus driver was AMAZING! He was helpful, kind, polite and gave an interesting commentary. He deserves a raise and should work somewhere else.
Charleston to Savannah

Is there WiFi on Southeastern Stages?

Yes, there is WiFi on Southeastern Stages! We recommend downloading your favourite films or programmes before your bus trip because the WiFi can lose its connection in rural areas. Don't worry, you'll still be able to check your emails and social media during your trip.

Are there power outlets or USB plugs on Southeastern Stages?

Yes, there are power outlets and USB plugs on Southeastern Stages buses. No need to worry about running out of battery in the middle of your favourite film. You'll also arrive at your destination with all your devices fully charged.

Does Southeastern Stages have a toilet on board?

Yes, there is a toilet on all Southeastern Stages buses. The toilet is generally located at the back of the bus or near the middle door. Most bus toilets do not have running water, so we recommend bringing hand sanitiser with you.

Does Southeastern Stages offer meals or snacks during the bus trip?

Southeastern Stages doesn't offer any meals or snacks on board. We recommend you bring some snacks and drinks in a reusable water bottle for your bus trip.

Do you have to print your Southeastern Stages bus ticket?

Yes, you need a printed ticket to board Southeastern Stages buses. Remember to print your ticket before you head to the station, as not all stations offer printing machines. Remember to carry a valid photo ID with you as it is needed to board the bus.

Does Southeastern Stages allow pets on board or in the hold of the bus?

Only Certified Service animals are allowed on Southeastern Stages buses. Pets are not allowed on the bus or in the hold of the bus.

What are the amenities on Southeastern Stages buses?

Busbud is a bus and train search tool – we include Southeastern Stages routes, schedules and prices in our searches along with many other train and bus companies. You can compare prices, amenities and times by searching for a route. If you find a suitable trip, you can go ahead and get your Southeastern Stages ticket from us. Note that train tickets sell out, Southeastern Stages and other operators generally charge a lot more for last-minute tickets or for tickets bought in person.