Book BoltBus Bus Tickets for your next trip

View different BoltBus bus schedules and BoltBus ticket prices to find a bus based on your traveling needs.

You'll be able to see which amenities are available for each individual departure when you purchase your BoltBus bus tickets online. These amenities may include WiFi, onboard restrooms, A/C, and power outlets among many others.

We give you access to all available BoltBus bus routes to faciliate your BoltBus bus bookings.

Get the best available deal by using a promo code to obtain BoltBus discounts on tickets.

On Busbud, you'll be able to find useful information such as BoltBus contact details in case you need to get in touch with them.

Partnering up with BoltBus allows Busbud to ensure high quality BoltBus bus services to travelers from all corners of the world. 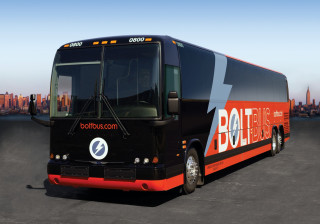 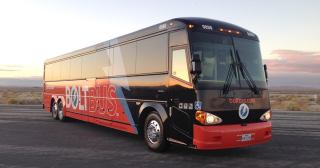 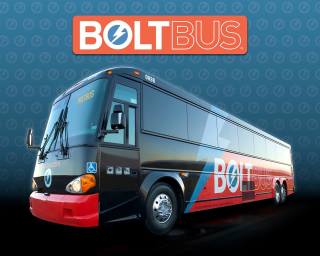 User reviews from travelers who booked their tickets with BoltBus

For some reason, whether it is bus or train, I always get tired between exit mile markers 40 and 95. Give or take some. (Or car).
BoltBus

5 May 2021
Literature says Bolt bus fills 50 seats,and wifi, which I expected, allowing for a modecum od SOCIAL DISTANCINGand sime sort of entertainment on the trip. Wekk, no wifion yhe bus, bo explication, just no eifi... At the STOPS in Tacoma and Olympia , additional passengers entered. Enough to fill EVERY SEAT, thus over crowding the bus and NO SOCIAL DISTANCING of any sort, my legs were going numb from lack of movement ( i was ‘fortunate’ enough to uphave a 6 foot 6inch basketball player in the seat next to me.) before we arrived in Portland. the trip was horrible, and i eveb the time and place for departure in seattle is convenient doubt i will ever ride BoltBus again. I am very disappointed
BoltBus

28 March 2021
Bus was an hour late due to engine trouble and the bus not wanting to start. It never reached final destination and they told me to walk or catch another bus.
BoltBus

1 October 2020
My bus driver seemed superhuman with how calm, collected, and professional they were
BoltBus

14 September 2020
Comfortable, clean, affordable and safe ride to and from Bellingham and Seattle. Highly recommend
BoltBus

6 September 2020
we requested a travel voucher for this trip days ago and have not gotten any sort of response. We did not take this trip. please send some sort of acknowledgment that we did not lose our money and can rebook this trip in the future.
BoltBus

11 March 2020
My driver was pleasant and accommodating. I explained to her about my asthma & anxiety and she seated me up front where I had ample space. I'm very pleased with Bolt Bus Service
BoltBus

9 March 2020
Great bus, much better experience and around the same price as greyhound. I took greyhound from DC to NYC and BoltBus from NYC to DC due to my negative experience on Greyhound.
BoltBus

9 March 2020
Driving was excellent. The socket to charge my phone was broken and another socket that I used barely charged the phone.
BoltBus

9 March 2020
It was a good ride, just little late by 10 min is ok. But my internet did not work on both the bus. May be an issue with my phone but no support for that. Also, if some writing instrument could also be handy, just a suggestion.
BoltBus

7 March 2020
Nice bus, but mor than 2 hours late. Staff was very nice and once we were finally on the road it was okay.
BoltBus

7 March 2020
I've taken the bus many times in the past and don't have the best experience but this was honestly one of the best experiences I've had. The driver was on time, professional and got us there 5 mins earlier than the arrival time. I will definitely take BOLT bus again
BoltBus

2 March 2020
I've been taking the Bolt Bus for years. So it's been a while since I took a bus and found out that they have changed bus location for pick up and drop off. I wound up missing my bus, even tho I was in the area 45 min early and called customer service to ask for help and they told me that because I didn't call half an hour before the departure of the bus they couldn't do anything for me. It was the last bus leaving Seattle and I couldn't meet up with my mom who drove from Vancouver Canada to pick me up in Bellingham. Very disappointed that they couldn't at least help me in any way.
BoltBus

28 February 2020
Basically, the only issue I/we had with the bus is that it could have been cleaner. That might be simply a heightened concern of the times in which we are living.
BoltBus

28 February 2020
There was no "free WiFi" to speak of and the seats were old and ripped. The electrical plugs were few and far between and not all worked.
BoltBus

26 February 2020
This was my first time travelling by bus in North America. I may be travelling on the same route tomorrow. It was a nice experience. One request - Can your management try finding more stoppage points before crossing the border? So travellers can catch the bus from other places like any sky train station rather then coming all the way to Vancouver.
BoltBus

25 February 2020
The trip was really good, everything on time, but the driver was a little bit not friendly, so for me is important to feel that kind of kindness for the stuff
BoltBus

25 February 2020
The bus ride itself was OK, but the terminal in Seattle is rinky-dink. When we got to 5th and Dearborn S we thought a joke had been played on us until I spotted the “Bolt” sign on a pole. Having been asked to show up half an hour early, we were dismayed that there was no place to sit down and perhaps have something to eat or drink. And what do your patrons do when it’s raining?
BoltBus

25 February 2020
During previous trips the bus has always been there early so maybe there was traffic this time. The driver is always nice as well. Appreciate the extra leg room and outlet.
BoltBus

24 February 2020
Staff was helpful but waiting almost 2 hours in the cold is hard with no word of where the bus was. Maybe texted updates could help?
BoltBus

23 February 2020
Only problem was the wifi wasn't great. Driver from Vancouver was awesome and super enthusiastic and the driver to Vancouver was very thoughtful to wait for me as I was holding the bus up at the border.
BoltBus

22 February 2020
We thought the driver could have been a bit more cordial and informative for the border process. Still, very good value for the fare price!
BoltBus

22 February 2020
This is the worst experience ever with bolt bus. The driver stopped 2 times to do things that we don’t know, he took the longest road i don’t know why, he doesn’t know how to use the heat because it was extremely hot.everybody was anxious and angry,not to mention that we arrive 3 to 4 hours late to new haven. I would never recommend this bus . Never
BoltBus

21 February 2020
Overall good experience But the toilet didn’t flush ( it was gray hound bus, that came instead of bolt bus because of technical issues
BoltBus

21 February 2020
The driver was driving erratically speeding down highways and what not. Also I have a complaint about the bus the bus was supposed to have chargers yet mine did not have one. Why do I pay for a service I do not receive?
BoltBus

21 February 2020
My driver Rex was professional and pleasant. The trip was relaxing and he was a very alert and competent driver. I really appreciate your company and your prices are very reasonable
BoltBus

19 February 2020
The driver was rude and didn’t provide any good customer service at all. There was no guided directions from the driver as to where we should load our bags and proceeded to be rude when space was made. Driver was also rude when border security told us to get our remaining bags and didn’t want to let us on to the bus to do so
BoltBus

Busbud is a bus search tool - we include BoltBus routes, schedules and prices in our searches along with many other bus companies. You can compare prices, amenities and times by searching for a route. If you find a suitable trip, you can go ahead and get your BoltBus ticket from us. Note that buses sell out, BoltBus and other operators generally charge a lot more for last minute tickets or for tickets bought in person.