BestBus is one of the popular bus companies in the Northeast of the United States, formerly known as DC2NY. Founded in 2007 by Asi Ohana and Richard Green, BestBus has been offering low cost city-to-city trips to make bus travel affordable and accessible to all.

BestBus offers a free bottle of water, free WiFi, a toilet on board, and 110V recharging outlets under every seat on all of their buses.

Busbud has been an authorized seller of BestBus bus tickets since 2015. Busbud helps you compare, find, and book cheap BestBus bus tickets - at no additional cost! You can easily compare all schedules and ticket prices on Busbud. For your next trip, choose the bus and book on Busbud. It's simple, fast, cheap, and environmentally friendly!

With Busbud, it is very easy to book a BestBus ticket: you simply need to fill in the details of your trip in our search bar (dates of travel, departure and arrival cities, numbers of passengers) and click on Search now. Then, select the BestBus bus that suits you best and securely complete your booking on Busbud.

You will be able to travel for as low as $17. With many daily departures, there are a lot of great deals to uncover for the bargain hunter! We recommend that you book your ticket at least 1 to 2 weeks in advance, as ticket prices tend to raise when the travel date gets closer. 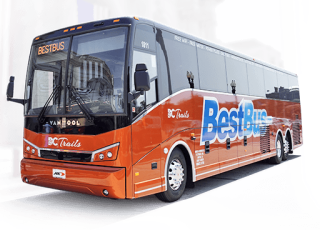 User reviews from travelers who booked their tickets with BestBus

Polite staff. Roomy seats. A little too tightly packed though. A small break would have been appreciated, but all in all I'll definitely travel with it again.
New York to Manassas

May 16, 2022
No announcement was made when we arrived in Washington or in Virginia. There was no information about the stops. One fellow had to go to the driver and ask him to let him off after we left the station in DC. The seats were so tight we couldn’t even stretch legs or put the seats back. We were very disappointing compared to other buses we have taken
New York to Washington

May 3, 2022
The bus driver was extremely rude!! It was two of us and three kids, when we got to the bus stop he opened the place where the luggage is and went to go smoke a cigarette. We had to climb into the bus to get our luggage. Earlier, he threatened to kick my sister off of the bus because her mask was not on. She was eating and forgot to put it back on. I understand COVID but he could have said it alot nicer. RUDE driver.
New York to Manassas

January 10, 2022
The driver could have helped the passengers load their bags in the bus but he just sat there; this is the driver at Cushing. The driver that came on and replaced him did unload the bags. The first driver was somewhat curt with his instructions: need a lesson in how to address the customers. Other than that it was a good trip and we arrived 15 minutes earlier than scheduled
Manassas to New York

December 4, 2021
First time taking the bus but certainly not the last. Can finally go to NYC with great ease.
Manassas to New York

September 28, 2021
Great bus very clean and driver was super helpful and courteous driver too. Wifi could use a bit of strength boost but that's very minor everything was great.
Washington to New York

August 31, 2021
Bus left me on rest stop in the middle of no where, it left earlier then the time that was stated, the driver said 15 minutes i was there and the bus left me
Manassas to New York

June 20, 2021
The driver was polite and professional , bus left and arrived on time. Although the seats were cleaned, I sat near the back and there was an odor of urine coming from the restroom
New York to Manassas

March 14, 2021
I was under the impression that i had purchased a ticket to washington, but it was actuallt a ticket to virginia. I tild the attendant about the issue, and he put me on a later bus to washington. It wasnt a big deal. Got to my desitination ahead of schedule, and the ride was very pleasant. Will ride again in the future
New York to Washington

November 1, 2020
The driver is very polite and helpful. He is the best driver. I took best bus for second time and met him twice
New York to Washington

September 9, 2020
Overall a good ride arrived to DC only complaint cell phone usage should be limited The driver announced the rules about cell phones in the beginning of our trip but there are a few people who still were on and way too long in talking loud.
New York to Washington

March 18, 2020
I enjoyed the bus ride, they have free wifi on board, and it was comfortable enough for me to sleep through it. I'd take it again.
New York to Manassas

February 27, 2020
Great experience. Free water at the front of the bus was a nice touch. The legroom was a bit narrow but still manageable. The bathroom was relatively clean. We left 10 minutes late but still arrived on time. I'd use this company again for sure!
New York to Washington

January 25, 2020
Great! Fast, easy, check. Only thing is the bus was labeled DC trails not best bus so I didn’t know that was them until I asked. They should but a poster but just a heads up
New York to Washington

January 11, 2020
As a visitor from UK I was very satisfied with BestBus, pleasant and efficient staff, nice clean bus and most of all very affordable.
New York to Washington

December 28, 2019
The trip was long, I think because a lot of traffic. I would definitely try a different bus next time.
Washington to New York

December 1, 2019
The bus was clean and comfortable. I was offered a bottle of water for the ride which was nice. The entire trip was quiet and uneventful and we arrived in NYC on schedule. The staff was very friendly and courteous. I plan to ride again soon!
Manassas to New York

October 25, 2019
This bus need a place to charge the phone. That will improve the service. Other than that, everything else was good
New York to Manassas

October 14, 2019
Great for us - left on time arrived on time - patchy wi-fi but overall it was really good
New York to Washington

October 2, 2019
The bus ride was great. There was traffic or else we would have gotten there on time. It was a little cold but other than that everything was perfect.
New York to Washington

September 8, 2019
Aside for traffic it was a good experience. However there should be some sort of sign in Rehobeth designating the waiting area.
Rehoboth Beach to New York

September 3, 2019
The trip was good but no information was given on the bus. I wanted to use the wifi but didn't know the name of the connection!
Washington to New York

September 3, 2019
Very limited leg room (bad if you’re over 6’) and ETAs are very ambitious being about 1 hour off without hitting traffic.
Washington to Rehoboth Beach

August 31, 2019
The estimated time was 30 minutes less than is physically possible. It's a 2.5 hour trip, but it's a great deal and was well worth it
Washington to Rehoboth Beach

August 31, 2019
Bus was cramped, my major problem was the driver. The ride was extremely rough, the driver would hit the gas and slam on the breaks throughout. I understand it can be tough with traffic, but this was extreme. Please have someone monitor his driving and perhaps more training?
Rehoboth Beach to New York

Does BestBus have WiFi on board?

How can I exchange my BestBus ticket?

Does BestBus allow pets on board?

How many bags can I take on BestBus buses?

You can bring 1 carry-on and 3 checked-in bags of up to 50 lbs for free on BestBus buses.

Do I need to print my BestBus ticket?

No, you don't need to print your ticket. You can present your BestBus e-ticket on your smartphone or tablet.

What are the amenities offered on BestBus buses?

BestBus offers a free bottle of water, free wifi, 110V charging outlets and a restroom on all of their buses!

Busbud is a bus search tool - we include BestBus routes, schedules and prices in our searches along with many other bus companies. You can compare prices, amenities and times by searching for a route. If you find a suitable trip, you can go ahead and get your BestBus ticket from us. Note that buses sell out, BestBus and other operators generally charge a lot more for last minute tickets or for tickets bought in person.