Travel with Go Buses and Busbud

With 1000 buses, Go Buses provides direct services from Boston to Manhattan with multiple pick up and drop-off locations. Daily transportation between New York City (NY), Newton (MA), Cambridge (MA) and Providence (RI) are also available. In addition, you can travel with Go Buses from Miami to Key West in Florida.

Busbud has been an authorized seller of Go Buses tickets since 2015. You can easily find the fastest, cheapest and best bus travel option with Go Buses on Busbud platform at no additional cost!

With Busbud, it is very easy to book a Go Buses ticket: you simply need to fill in the details of your trip in our search bar (dates of travel, departure and arrival cities, numbers of passengers) and click on Search now. Then, select the Go Buses bus that suits you best and securely complete your booking on Busbud. 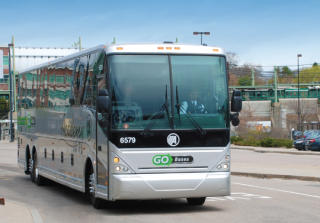 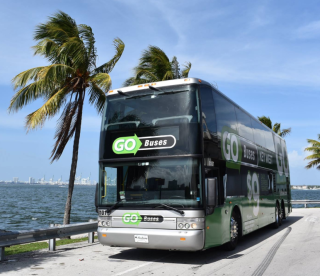 User reviews from travelers who booked their tickets with Go Buses

Directions to the station were vague and minimal. The bus was late to arrive, the staff was rude, and it was overall a very stressful experience. Please provide more detailed directions (e.g. an address to the station, or a landmark such as which bay the bus will arrive at.)
Tysons to New York

May 6, 2022
The weather was awful but the drivers got us to New York safely. We stopped for an unknown reason in Hartford, perhaps to change drivers?
Boston to New York

March 13, 2022
The driver was excellent. I knew I was in good hands after 15 minutes of driving!
Manassas to New York

December 27, 2021
Bus AC did not work so we had to divert for another bus. Traffic was horrendous (not your fault!) but it ended up being a 6+-hour trip partly due to AC issue. Driver was great, though, despite some really tough traffic.
Tysons to New York

October 4, 2021
This is first time in a year and half I take a bus. I feel very comfortable on the bus for 4 hours. The drivers are nice and they are good drivers.
Boston to New York

September 1, 2021
Seat nelt broken on multiple seats, too much AC comes out even though we blocked it kn the seat. There are weird black-chewinggum like stuff on the buttons that is used for chair extension.
Tysons to New York

August 2, 2021
Not satisfied with this trip. Was the worst ride that I had. The bus was of very low quality. No power outlets, no wifi at all, even though it was supposed to be on the bus. The bus left on time, there was no traffic or any other obstacles that would slower the traffic but the bus arrived 40 min late nonetheless.
New York to Tysons

June 30, 2021
Safe driving and friendly service for a good price. Passengers need to be reminded to keep masks on though. Two men seated in aisle seats two rows behind driver had theirs off the entire 4 hour ride.
Boston to New York

June 30, 2021
Other than the lateness, everything was fine, but I guess it was b cuz of the traffic cause the delay
New York to Manassas

June 26, 2021
Thanks for a reliable service. The driver was courteous, on time and applied a lot of safety driving the bus. I enjoyed coming back a lot with your company.
Washington to New York

March 14, 2020
Excellent way to get to NYC. I'll definitely use this bus again (I've used the Go Buses before). I also recommended this form of transportation (using Go Bus) to numerous friends (who have done this and found it fantastic too).
Providence to New York

March 9, 2020
Timely, great staff, ground staff in NY and the driver, bus a little old but clean and comfortable
New York to Providence

January 25, 2020
It would be great if they have usb charging ports at individual seats and WiFi on the bus.
Boston to New York

January 22, 2020
Most buses are a bad experience so I'd probably rate them similarly. The biggest issue was just that the bus smelled like toxic cleaning solution.
New York to Alexandria

January 2, 2020
Incredibly late, no compassion from the bus driver when the bus finally did show up
Hartford to Boston

December 29, 2019
I hate this bus. It lated for almost 4 hours. I spent near 8 hours in the bus. It is so terrible. This was the worst experience.
New York to Boston

December 29, 2019
The bus driver (Claudia? her name began with a C) was cheerful and helpful and wanted everyone to have a bottle of water. She was really terrific.
New York to Manassas

December 29, 2019
I recently took a GoBus from Tyson’s Corner Station to NYC. The pickup location is great considering now I don’t have to go into DC proper just to take the bus up, which is the primary reason for my positive rating. Although not very well-marked, the large bus picked us up at Bus Bay A on the Tyson’s Galleria side. From the beginning, the staff were extremely welcoming and warm. They offer a water bottle to each rider. Seats were comfortable enough with a tiny cup holder. WiFi worked but wasn’t too strong so I ended up disconnecting from it. Due to it being a holiday weekend, we hit quite a bit of traffic causing us to arrive 1.5h later than scheduled. I had accounted for that, so despite it, I was pretty pleased overall with the experience!
Tysons to New York

December 28, 2019
Our driver was very punctual! Got everywhere on time. I would have loved an itinerary so I knew about the stops along the way. Other than that, great!
Providence to New York

December 26, 2019
The only complaint that I have is on the return trip the bathroom on the bus was very dirty. Urine on the floor and all over the toilet seats.
Tysons to New York

December 19, 2019
My first driver was a little intense. He raised his voice at me when I got on the bus at the wrong time. After wrongly understanding his hand gesture to wait. He would not let me use the garbage that was at the front during the ride insisting I should use it when I save and that I should not be standing up during the ride. The trip took a bit over an hour longer then predicted
New York to Boston

December 15, 2019
Service was fine and pleasant and ride was very comfortable, but being 1h late caused me to miss an important connection
New Haven to New York

December 8, 2019
Our bus broke down before we even got out of nyc. It took 2.5 hours to get a new bus and get on the road
New York to Providence

December 7, 2019
Bus was 1 hour late to get here and leave and 1.5 hours late to arrive at destination. Driver stopped in dark back alley area without explaining to us he's switching drivers, making everyone terrified for their lives.
Providence to New York

December 6, 2019
It could have dropped us in a popular place where we can catch a taxi and also provide some information about the destination city. Bus is dirty.
Washington to New York

December 1, 2019
I slept on bus because that was 6am to Providence. But when I woke up bus was on the highway to Boston. Some parts was my fault But I don’t know why the driver was not notice to me??? I was late meeting time and spent extra $90 for Uber!!!
New York to Providence

You are allowed 2 checked luggages of up to 50 lbs and 1 carry-on Go Buses.

Can I take my bike, skis, and other sport equipment on Go Buses?

Bicycles, skis and large sport equipment can be stored below the bus as long as room exists. Please speak to a customer service agent before boarding.

What amenities are available on Go Buses?

Does Go Buses allow pets on board?

Only service animals are allowed on Go Buses.

Busbud is a bus search tool - we include Go Buses routes, schedules and prices in our searches along with many other bus companies. You can compare prices, amenities and times by searching for a route. If you find a suitable trip, you can go ahead and get your Go Buses ticket from us. Note that buses sell out, Go Buses and other operators generally charge a lot more for last minute tickets or for tickets bought in person.