Trains from Barcelona to Valencia

Save time by comparing all your travel options in one place.

Our world class team of experts is always here to help.

No available trips on your selected date
Trains leaving Friday

No available trips on your selected date
On this page:

If you're looking for reliable, comfortable transportation in Spain, Renfe is a good option. The company offers a variety of routes, making it easy and affordable to get around. On any given day, 8 buses leave from various locations, ensuring convenient departure times. With prices ranging from $17 to $173, the buses are well-maintained and comfortable. Whether you need transportation for business or pleasure, Renfe gets you where you want to go for a fair price.

The train trip from Barcelona to Valencia is one of the most scenic in Spain. Along the 350 km that separate the two cities, you'll see the beautiful landscape of the Spanish countryside, extensive fields, eminent hills, small towns, as well as the picturesque Mediterranean coast.

The trip is affordable and a great way to see some parts of Spain that you might not otherwise get to see. Also, taking the train can be faster than flying, as stations tend to be well-located, saving you a trip to an isolated airport.

Six trains make the trip every day, so you can easily find one that fits your schedule. The first train departs at 9h15 and the latest one leaves at 19h15. If you're looking for a beautiful, scenic train trip in Spain, the train from Barcelona to Valencia is definitely one to consider!

Renfe trains from Barcelona to Valencia

The train from Barcelona to Valencia is operated by Renfe, Spain's most popular and largest train company. Renfe operates different trains, including high-speed AVE and regular regional trains.

AVE trains from Barcelona to Valencia

These are high-speed trains that can reach up to 200 mph. They make fewer stops than regional trains and take about 2 hours and 30 minutes to reach Valencia from Barcelona. The trip is usually very comfortable, as trains have air conditioning, plenty of legroom, and large windows to enjoy the views. You can also buy food and drinks onboard.

Regional trains from Barcelona to Valencia

The regional trains travel slower than the AVE trains and make a few stops. However, it's still a comfortable way to go between those cities, as the train has amenities like air conditioning, power outlets, Wi-Fi and, of course, the scenic view of the Spanish countryside. This type of train usually takes about 5 hours to complete the journey.

The train stations in Valencia

There are two main stations in the city. The two stations are located in the city center, within 10 to 15 minutes from one another and are well-connected through public transportation. They are also just a short walk from many of the top attractions in Valencia, making it easy to get around in the city.

Joaquin Sorolla is Valencia's main train station, located in the city center. Named after the famous Valencian painter, the station opened in 2010 and has a modern architecture and overall structure, generating an airport atmosphere that makes it unique in the city.

AVE high-speed trains arrive and depart from Joaquin Sorolla Station to various destinations across Spain, including Madrid and Barcelona.

Estació del Nord is Valencia's other train station, located in the north of the city. Functioning since 1852, it's the city's major train station and is known for its Art Nouveau and more classic style.

The station serves Renfe regular trains, connecting many other cities in Spain, like Madrid, Alicante, Barcelona and Sevilla.

Nord Station is also connected to local public transportation. It's also a beautiful station that provides everything travelers need to have a comfortable, pleasant ride.

Whether you're catching a train to Valencia's historic center or departing on an adventure to another part of Spain, the city's train stations offer convenient and affordable ways to travel.

The train station in Barcelona

The main station in Barcelona is called Estació de Sants. It's located in the southwest part of the city, about 2 miles from the center. If you're staying downtown, you can take the metro to get there (the journey takes about 20 minutes and you can take lines L3 or L5). Buses and taxis are also easily within reach.

Amenities on the Renfe trains

Renfe trains offer comfortable and convenient travel, as they have a variety of amenities, such as Wi-Fi, air conditioning, spacious seats and onboard entertainment. They also have power outlets so you can charge your devices on the go.

If you're looking for a comfortable way to travel to Valencia, the Renfe trains are definitely the way to go. You'll be able to relax and enjoy the journey while still getting to your destination on time.

Food and drinks on Renfe trains

If you get hungry during your journey, all the trains on this route got you covered. On the buffet car, you may walk around and eat something nice while enjoying the Mediterranean sea views. If you don't want to walk around, you can also choose a snack or drink from the mobile bar service. 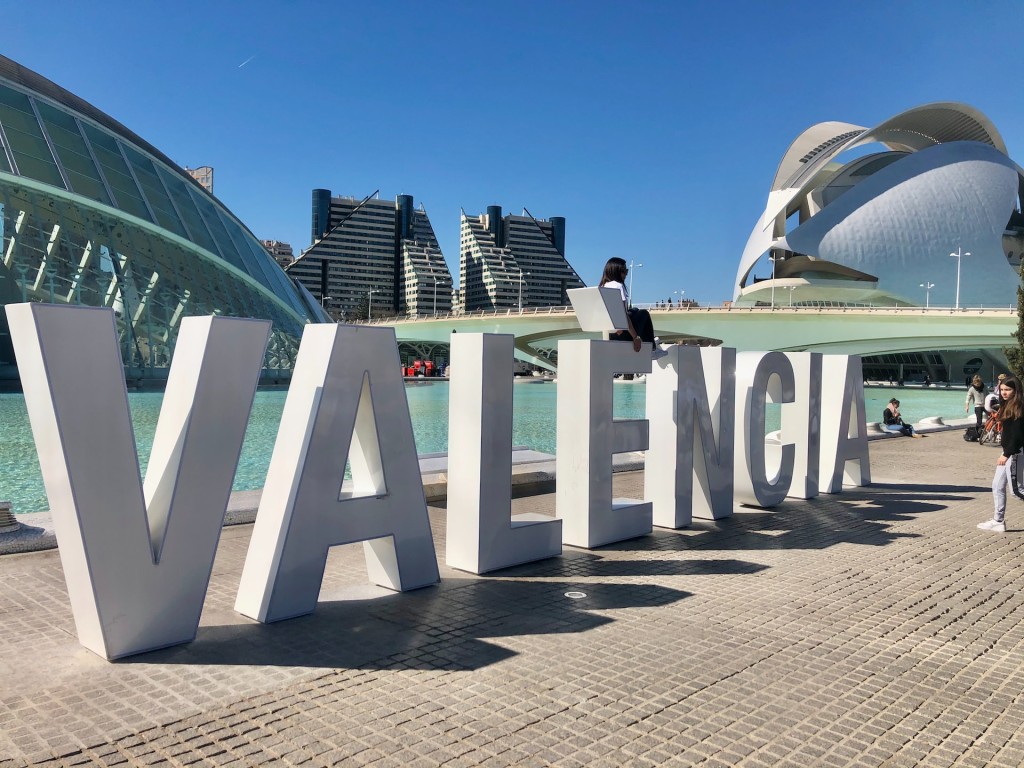 Train service from Barcelona to Valencia is covered by Renfe.

Information on this train trip

How much does a train ticket from Barcelona to Valencia cost?

How long is the train trip from Barcelona to Valencia?

A train trip between Barcelona and Valencia is around 3h 22m, although the fastest train will take about 2h 47m. This is the time it takes to travel the 188 miles that separates the two cities.

How many daily trains are there between Barcelona and Valencia?

Which train companies travel from Barcelona to Valencia?

When taking the train from Barcelona to Valencia, you can travel comfortably and safely with Renfe.

What are the best sights and things to do in Valencia?

The average bus ticket from Barcelona to Valencia costs around $28 for departures 15 days prior.

To save money and be sure you have the best seat, it's a good idea to buy your tickets from Barcelona to Valencia, as early as possible. The best time to find and book cheap train tickets is to book at least 15 days in advance.

Usually RENFE_EUROMED will charge you higher prices for tickets closer to the departure date. To find the best prices, you should be flexible on your date of travel.

Trains from Barcelona to Valencia

The journey between Barcelona and Valencia is beautiful. You'll get to see the Mediterranean Sea, as well as the beautiful countryside of Spain.

If you're looking for a comfortable way to travel between Barcelona and Valencia, the train is definitely the way to go. You'll be able to relax and enjoy the journey while still getting to your destination promptly.

To secure the best, most-affordable train tickets, the best you can do is to book in advance. You can do this by visiting the Busbud, checking the best times and prices, and making sure you get a seat on the train that best suits your needs.

If you're flexible with your travel dates, you may also be able to find cheaper tickets by booking for mid-week travel, as opposed to weekend travel.

Also, remember the summer is high season in Spain, so more people will be on this route, and tickets tend to sell out quickly. If you're looking to travel during this time, make sure you book your tickets well in advance.

Whether you're looking for a comfortable way to travel or want to find the best deals on train tickets, Busbud will help you get around in Spain.

Is it safe to take the train ins Spain?

In Spain, trains are a safe and efficient way to travel between cities. The Spanish railway system is one of the busiest and most trusted in Europe, so you can rest assured that it's well-maintained. Additionally, all Renfe trains have security cameras onboard, so you can travel with peace of mind knowing that you're being watched over.

If you're ever feeling unsafe, be sure to speak to a member of the train staff. They will be more than happy to help you out and make sure you're safe during your journey.

Why choose the train

The train is a great way to travel between Barcelona and Valencia. It's fast, comfortable, and you can enjoy the scenery along the way. Plus, it's a great way to avoid the hassles of flying, like security lines and baggage claim.

Also, if you care about the environment, traveling by train is a much more sustainable option than flying. Trains emit up to 75% less carbon dioxide than planes. So, if you're looking for a convenient and eco-friendly way to travel between Barcelona and Valencia, go for the train.

Tips for a pleasant train ride

Here are a few tips to make sure you have a pleasant train ride:

Renfe is the national railway company of Spain. It was founded in 2005, though it's derived from another Spanish company founded in 1941. With headquarters in Madrid, Renfe operates a total of 12,000 kilometers of railways, making it one of the largest railway networks in Europe.

The company also operates a high-speed rail service called AVE, which stands for Alta Velocidad Española. AVE trains can reach up to 350 kilometers per hour, making them some of the fastest trains in the world.

What to see in Valencia

The city of Valencia is a beautiful city located on the east coast of Spain. It's known for its stunning architecture, Mediterranean climate, and friendly locals.

Some of the must-see attractions in Valencia include the City of Arts and Sciences, which is a complex of museums and theaters. Another option is the Central Market, a great place to try local food. Don't forget to visit the Cathedral of Valencia to see a stunning example of Gothic architecture.

If you're looking for something to do outside of the city, you can take a day trip to the nearby beach town of Cullera or go hiking in the Sierra de Espadán mountain range.

No matter your interest, you're sure to find something to do in Valencia. Let's book your tickets?

Will you be returning to Barcelona by train?

Train from Valencia to Barcelona

You can also go to Valencia by bus

Bus from Barcelona to Valencia

Busbud makes bus travel easy. We help travelers find a bus, plot routes, and book intercity bus tickets all over the world. Use Busbud to book your trip online, in your own language and currency, wherever you are. Busbud prides itself on its worldwide partnerships. We make it possible for you to buy tickets with its large network of trustworthy bus partners like Greyhound, Eurolines, ALSA, OUIBUS (BlaBlaBus), National Express and many others.