Book Peter Pan Bus Tickets for your next trip

Conveniently search for Peter Pan bus schedules and Peter Pan prices to choose an option that best suits your needs.

Busbud shows you which amenities are included with your Peter Pan bus for each individual departure.

With our coverage of all available Peter Pan bus lines, we make sure you are able to get to where you need to be.

On Busbud, you'll be able to find useful information such as Peter Pan contact details in case you need to get in touch with them.

With our partnership with Peter Pan, Busbud is able to offer reliable Peter Pan bus services to help you travel comfortably and securely. 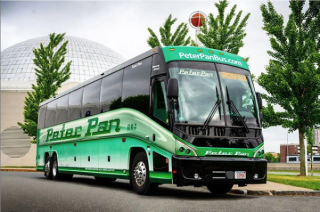 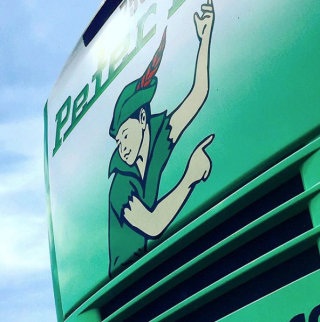 User reviews from travelers who booked their tickets with Peter Pan

Very poor time management. The bus was late and then the driver got lost on the way to New York. I ended up making my connection but it made me worrrkes.
Boston to Philadelphia

13 January 2019
Bus driver was rude for no reason, never smiled to us and answered very roughly.Bus was late because of the coincidence in Baltimora was late
Washington to New York

11 January 2019
The transportation has been good so far. But there are two down sides: 1. Grumpy conductors (no professionals in customer service) 2. The vender machine at Hartford, CT bus station still keeps the dollar bills and doesn't let us take the product since two years ago.
Boston to New York

10 January 2019
The Springfield to NYC leg of the trip was nearly an hour early. That's what I like to see
Amherst to New York

7 January 2019
I need to speak with a customer service representative. My trip was unacceptable.
New York to Boston

6 January 2019
Wi-Fi didn’t work, power points neither. Sometimes it was too cold, sometimes too hot. The bus itself was very dirty.
Boston to New York

6 January 2019
The bus broke down on the highway literally ten minutes out of the terminal. After a wait we switch to another bus that didn’t go to Hartford but was able to connect with one that did. So we transferred again !! It was Real inconvenient. Peter Pan is usually reliable. This Sucked.
Boston to New York

4 January 2019
None of the poweroutlets worked!!! AC wasn't on. Wifi was really bad. Couldn't turn the light on, the whole bus was pitch dark. No information from the driver regarding the delayed arrival.
Boston to New York

30 December 2018
During return trip from New York City to Hartford the driver took wrong turn and drove about 45 miles off course took repeated efforts by passengers to get driver to contact his company for assistance. He finally pulled over on Jersey Interstate and spoke to terminal. We were almost two hours late. How can a Peter Pan driver NOT know the route to Hartford? Unbelievable!
Worcester to New York

28 December 2018
For the price I had zero expectations but it got me from a to b so I have no complaints. Admittedly I slept through most of the journey so I can’t comment on it
New York to Philadelphia

27 December 2018
Excellent service. Would definitely use again (and recommend to others). The departure (and subsequent arrival at destination) was only ten minutes late. Not critical or bothersome (for me and/or my travelling companion). The only improvement I woul like to see is the allocation of seats at time of booking. The first coach destined for Boston filled quickly, requiring me to remove our heavier bags from the ‘hold’, and then transfer to another coach (apparently put into service extemporaneously), and join the rear of the new queue. I was not able to be seated with my companion. Allocating a seat number at time of booking/purchase of fares would obviate this inconvenience. Overall a pleasant and good value for money mode of transport.
Springfield to Boston

27 December 2018
Just a little bit cramped (I'm a big guy), but otherwise, incredibly punctual and the driver was informative and kind!
New York to Washington

26 December 2018
Today I had a great experience it was an express bus and we got to Springfield early the driver very professional and courteous. Will be great to have express busses on a regular basis
New York to Springfield

25 December 2018
The only complaint I have is the staff st the Philadelphia Peter Pan counter.. the young gal was rather Rude !
Philadelphia to Boston

24 December 2018
There bus was extremely dirty. There was sticky substance in the seat adjuster, dust on the food tray and moss in the charging point. Also the charging point did not work.
New York to Washington

23 December 2018
My only objection to the performance of Peter Pan was that the bus was about 50 min. late in leaving Balto., and I had to stand in line to ensure getting a good seat. I wish there had been an announcement about how late the bus was expected to be. It did make up some of the lateness by the time it reached NYC, but it was still late. A positive comment: the station in Balto. was a cleaner, more inviting place than I'd anticipated.
Baltimore to New York

19 December 2018
I am always well pleased with the courtesy and friendliness of your drivers. Great job.
New York to Baltimore

18 December 2018
The driver was great to and from NY. On the ride back the seat was lose so it swayed the entire ride. I had to jimmy my pocketbook so it would stop
New York to Boston

17 December 2018
Horrible driver. He crashed 1 bus and 1 truck and he said he was a murderer. Abusive from beginning to end of the trip.
Silver Spring to New York

27 November 2018
Comfortable and smooth ride, slight delay in leaving was made up for. Driver had good sense of humour.
Springfield to Boston

26 November 2018
Great ride, but I wasn’t sure if the driver knew where he was going at the end. We just got dropped off on 42nd st outside between 7th and 8th. I just wished we were notified that there was a change to the dropoff
Baltimore to New York

26 November 2018
The bus was in the gate at Boston very early, but the staff appeared disorganized and we did not leave until 20 mins late. However, I appreciated that they skipped a stop no one needed so we still arrived on time.
Boston to Springfield

23 November 2018
There was a lot of confusion in PABT because the buses were all leaving around the same time. There wasn't a lot of staff within the terminal there to aid confused passengers. Otherwise, the chaos was understandable with the Thanksgiving holiday and the bus ride itself was enjoyable and we left/arrived on time.
New York to Silver Spring

22 November 2018
I tried to catch the bus in Copley Square in Boston, and stood outside in the rain/snow for 45 minutes and it never came
Boston to Hartford

22 November 2018
The Washington Dc bus driver did not know the route and re-route twice. This delayed us for 2 hours.The transit bus from new York transmission broke down which delayed me again. The overall trip took 12 hours.
Washington to Hartford

22 November 2018
I got on a bus that said it was leaving to worcester. The bus was supposed to stop at worcester on its way to boston. It never made that stop. I ended up getting home at 2 am bc i was stranded in boston.
Hartford to Worcester

21 November 2018
Very good experience. Drivers can be a bit more friendly upon boarding. Other than that, excellent service.
New York to Washington

21 November 2018
Very happy to have the option as Amtrak was sold out when I needed. Can't help rush hour traffic so the delay to NY was understandable. My only suggestion: I arrived in Boston early enough to get the 12:00 bus (was fearful to book the early one in case of traffic) and I asked to get on earlier bus was told I could not. If there were empty seats, and no stops in between, it would have been better to be allowed to go early.
Boston to New York

Is there WiFi on Peter Pan?

Yes, there is WiFi available on Peter Pan buses! You'll be able to stay connected with friends and family, check social media and your emails throughout your trip. However, we recommend downloading your favourite films and programmes before your bus trip.

Are there power outlets or USB plugs on Peter Pan?

Yes, there are power outlets and USB plugs on Peter Pan. Sit back, relax and enjoy your bus ride with all your favourite devices fully charged! Note that Peter Pan might use replacement buses, so we recommend bringing a battery pack, just in case.

Does Peter Pan have a toilet on board?

Yes, there is a toilet on Peter Pan. The toilet is located at the back of the bus or near the middle. We recommend bringing hand sanitiser because most buses don't have running water. It is best to hold on to the rails when using the toilet in a moving bus.

Does Peter Pan offer meals or snacks during the bus trip?

Peter Pan doesn't offer any meals or snacks on board. We recommend you bring some snacks and drinks in a reusable water bottle for your bus trip.

Do you have to print your Peter Pan bus ticket?

No, you don't need to print your Peter Pan ticket! You can board the bus by showing your ticket on your smartphone along with a valid photo ID. Your e-ticket will be sent to you by email right after booking on Busbud.

Does Peter Pan allow pets on board or in the hold of the bus?

Only Certified Service animals are allowed on Peter Pan buses. Unfortunately, your beloved pets are not allowed on the bus or in the hold of the bus.

What are the amenities on Peter Pan buses?

Peter Pan offers you a safe, reliable and comfortable bus journey. You will be able to enjoy Air conditioning, Standard seat, Power outlets, Toilet, Wifi when travelling by bus with Peter Pan.

Busbud is a bus and train search tool – we include Peter Pan routes, schedules and prices in our searches along with many other train and bus companies. You can compare prices, amenities and times by searching for a route. If you find a suitable trip, you can go ahead and get your Peter Pan ticket from us. Note that train tickets sell out, Peter Pan and other operators generally charge a lot more for last-minute tickets or for tickets bought in person.