The Hackathon, a glorious two-day challenge event where members of the Busbud staff can collaborate together on important side projects and challenge ourselves on creating useful products in a short period of time.

How does it work? Anyone at Busbud had the opportunity to pitch their project to the entire company. From there, individual members select the two projects they’d like to work on the most. For the hackathon, we like to encourage individuals to collaborate with other team members, so projects that only had one member were discarded.

At the end, a total of six projects got the green light and team members quickly assembled to create a game plan for the next two days:

Here’s a brief summary of the six projects we accomplished over the course of those two days.

Ping Pong is serious business at Busbud. It’s a huge part of our culture and it allows staff members to decompress and move around for a little bit. One of our major pain points while playing Ping Pong was that we were wasting time running after loose Ping Pong balls.

Here’s what it looked like before the Ping Pong Pros set up the anti time-wasting net.

And here’s what it’s like with the new anti time-wasting net. Much better.

The team didn’t stop there. Dustin and Cole, who are respectively integrations and back-end developers, decided to spice things up around the Ping Pong table. They created both challenge and electronic scoring systems that changed the Busbud Ping Pong experience forever.

Busbud members can now challenge each other via Flowdock. Simply tag the person you want to challenge and include the #challenge hashtag. Now, the potential opponent needs to respond to start the official match. He or she does so by opening the thread and replying #accept. 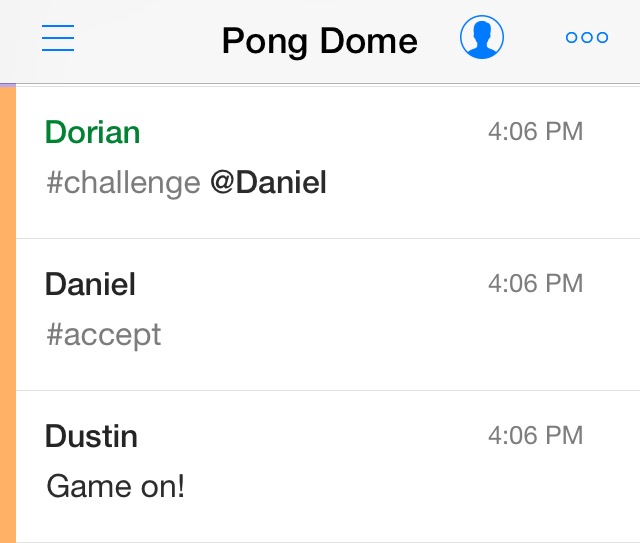 From there, the ESS (Electronic Scoring System) automatically displays the players’ names on the monitor.

Dustin and Cole also wired buttons to the table, allowing players to add and subtract points with the simple touch of a button. No need to say the score out loud now, it’s all on the screen. The “Flowbot” project actually won the coveted “gold” prize as the winning project! Flowdock is the internal communications platform that we use. The beauty of the platform is that’s it’s extremely customizable and allows us to get creative. For the hackathon, the team decided to make the platform more useful for the Customer Experience and Engineering teams as well as bringing in some more comedic relief for the rest of the staff.

Customer support is one of Busbud’s core teams. And to help them do their job more efficiently, the team built some Flowdock features specifically for them. For example, we can now have the purchase history of an user, detect if an error occurred and resend the tickets to the user mailbox…without leaving the Flowdock interface! The goal is to gather all the tools and information in one place to spend less time fiddling with multiple interfaces.

The team also used this opportunity to make the communications platform a bit more gif friendly. The new “team reaction gifs” feature was built to allow the Busbud staff to express themselves in a funky way. The team built a make-shift studio in the “Moose Room” and asked every Busbud member to act out 30 different reactions using a bunch of costumes. Loris, our resident gif-master then carried on to direct the actors and get the best out of them.

Members of Busbud’s product, analytics, operations, marketing and communications teams got together to gather more data about bus travelers and spread the Busbud word across Montreal, Ottawa and Minneapolis.

Carl created a 15 question survey that allowed us to have a better understanding of bus travelers’ needs and preferences when purchasing bus tickets. We then deployed our teams in Montreal, Ottawa & Minneapolis and approached users at the bus stations.

The second part of the offline hack, involved spreading some BUSLOVE in Montreal and Ottawa. We distributed flyers and posters to hostels, tourists and locals alike to get the word out for Busbud. Even though we’re an internet & technology company, it felt good to talk to users in person and really experience what they live on a daily, weekly, monthly or annual basis. This is awesome. The Data Team synched up with our Product Management Intern and created a fantastic project that earned second place at the hackathon.

The goal of the project was to come up with a system that’ll quickly display what our work is currently doing for our customers and the company. Whether it’s key customer satisfaction metrics, the routes that are currently being served around the world or what we’ll be eating for Team Lunch on Wednesday.

The hardest part of this project was to show enough different visuals and data to keep the staff interested! Whether it’s through beautiful data visualizations or simply having content that is useful and entertaining!

This data screen, as mundane as it might sound, is really an added boost to our office’s decor. It simply allows us to display important announcements or funny messages so we can all keep up with Busbud’s company culture.

After an awe-inspiring pitch by Adrian, our Senior Integrations developer, a lot of people jumped on board to try and integrate as many bus operators in a two day window. The seven member team got together and made Busbud’s “Kangaroom” their HQ!

At the end of the week, the team managed to integrate seven bus operators across different key markets around the world. In what would become an epic battle of the watches, a bunch of developers and a product designer got together to create fully functioning Busbud watch apps for our users.

The hack was challenging as none of the people involved ever worked on a “wearable” app before… nevertheless, create a fully functioning product in two days.

During the hackathon, the Android team gave more of their time and attention to the notifications feature whereas the Apple team really focused on shipping a product as quickly as possible. All in all, Busbud’s hackathon was a success. We managed to strengthen our company culture, have a better understanding of our customers’ needs, add a new product line to our name, learn a bunch of new stuff and most importantly…challenge ourselves to the best of our abilities. This is what a hackathon is all about and we already can’t wait for next year.

Did you enjoy getting a glimpse of Busbud’s hackathon and learning about our company culture? We’re currently looking to add some people to our team! Check out our careers section!