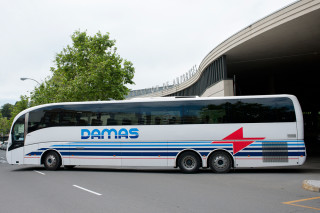 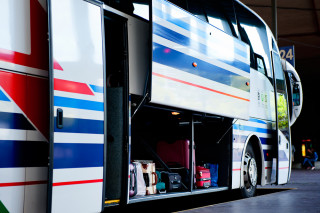 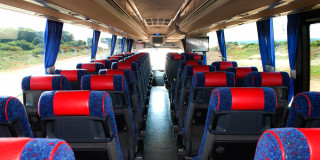 The 11:15 bus never turned up and as a result o had to pay £195 taxi to Malaga airport
Algodonales to Málaga

October 22, 2022
Very satisfied with the service, we arrived on time, the only complaint was about the window glasses.
Seville to Ronda

October 13, 2022
The bus driver going to Ronda was great! Very friendly and a good driver. The bus driver from Ronda to Sevilla drove VERY fast a reckless and was tailgating many cars. It was not relaxing but a bit scary.
Seville to Ronda

October 11, 2022
First of all, we were not even on a Damas bus. No explanation as to why we had to change buses and the driver was very unpleasant, preventing us initially from getting in the bus - again without an explanation. Instead of leaving immediately he got off the bus to smoke a cigarette and chat with a colleague. Not very impressive.
Ronda to Seville

October 6, 2022
Left on time from ronda not many on bus had a seat to myself, driver was really good not his fault late big traffic in Seville and a crash closed a lane for a bit
Ronda to Seville

September 28, 2022
The bus driver was very helpful and did everything to ensure his bus left on time.
Málaga to Ronda

September 24, 2022
Purchased tickets online, very simple. Bus was a great way to get to Ronda and enjoy the scenery.
Málaga to Ronda

September 6, 2022
We are not from Spain. We Asked the driver at Arcos if it was bus to Cadiz which he confirmed. I bought the tickets online and showed it to him. At Jeres de la Fonterra we were told the bus does not go to Cadiz and we need to get off. We had to buy new tickets for £7,60 each to get to Cadiz. This is not right.
Arcos de la Frontera to Cádiz

July 2, 2022
The bus leaving Malaga was late for 45 mins. There was no announcement or communication to passengers. We did not know what had happened and just kept waiting. The service is very unprofessional.
Málaga to Ronda

April 30, 2022
Previous answers not strictly speaking true as we were 15 minutes early arriving on Malaga
Ronda to Málaga

March 22, 2022
First time, so no previous experience, but the bus was modern, the seats comfortable, enough legroom, and the driver drove smoothly.
Ronda to Málaga

November 24, 2021
My issue is that the bus was not labeled as a 'Damas' bus. It had a completely different sign, and the actual bus with a 'Damas' logo was empty. There was no staff or proper sign at the station. We had to ask lots of folks and bus drivers to find our bus. Only after talking to the exact bus driver did we know the bus was the right one. Almost missed it!
Ronda to Málaga

October 18, 2021
I bought a ticket for 16:00 departures and the bus never showed up 6 other people were also waiting The next bus at18:00 said it was there and left in time but we were all looking and never saw it
Ronda to Málaga

October 18, 2021
Bus late leaving Malaga but made up some time then left Ronda on time. We were very happy with the service and the journey. Good value compared to the train
Málaga to Ronda

October 5, 2021
a) the bus driver was not a very good one - he occasionally braked suddenly, etc (b) there was no wifi on board (c) when we arrived at Sevilla, there was a protest and the bus driver had to go through another entrance to the bus stop but he was not very professional and told us to get out and then took the bus with our luggage inside without saying anything to us and we had to run after the bus and go in to get our luggage
Ronda to Seville

March 4, 2020
Everything was great apart from the driver did not accept the e-ticket and wanted us to open the email showing the Damas ticket. There was a language barrier but we got there in the end with the help of Google Translate.
Ronda to Málaga

March 1, 2020
Even though the bus left Ronda 10 minutes late and there was some delay on the way (road works) we arrived in Malaga at the exact time.
Ronda to Málaga

February 27, 2020
I went and asked at the station where our bus was leaving from. The man said gate 9 or 10. A bus was sitting at another gate. There is no board with departure information. We asked the driver at the last minute or we would have missed the bus.
Ronda to Seville

February 24, 2020
Perfect ride. Left and arrived on time. However there was no toilet on board, even though it said so while booking the ticket.
Málaga to Ronda

February 23, 2020
Comfortable ride, on time & charging ports in the ceiling. Had no issues with mobile ticketing & contrary to instructions when purchasing online, did not need to produce ID.
Ronda to Málaga

February 10, 2020
driver return needs to slow down and consider passengers esp the turns and round abouts and road surfaces
Ayamonte to Seville

December 28, 2019
Very enjoyable ride back to Seville driver invited us to sit in front seats as were unoccupied so views were excellent lovely to see locals using this service so well very impressed with Damas 😀
Matalascañas to Seville

December 7, 2019
Excellent service and great drivers. First trip was late but not the fault of the driver. There was an accident on the road and our driver made the best efforts to get us to our destination as soon as possible.
Seville to Ronda

December 2, 2019
Great value for money and saved me hiring a car and having to drive. A nice relaxing journey
Seville to Aracena

November 25, 2019
Driver was very careful driving at night in the winding roads to ronda. Bus left and arrived on time
Seville to Ronda

November 22, 2019
It was good but the number on the bus was different from my ticket. Ronda Bus Station had no information screens which is very unsettling for foreign passengers.
Ronda to Seville

November 2, 2019
Everything worked perfect, the driver very attentive and helpful. I would reccommend providing WiFi on the bus since it quite a long journey from Sevilla to Ronda. Without it, one can enjoy wonderful Andalusian nature from the window.
Seville to Ronda

October 30, 2019
I suspect that whoever made the schedule did not calculate correctly because the driver drove fast but safely, we encountered no obstacles, but still arrived slightly late.
Málaga to Olvera

October 25, 2019
All the seats along the back were broken and there was rubbish left on the bus from the previous journey
Ronda to Seville

Busbud is a bus and train search tool—we include Damas routes, schedules and prices in our searches, along with many other train and bus companies. You can compare prices, amenities and times by searching for a route. If you find a suitable trip, you can go ahead and get your Damas ticket from us. Note that train tickets sell out, Damas and other operators generally charge a lot more for last-minute tickets or for tickets bought in person.