Travelling by bus in the US

Rolling up the East Coast, from Charleston to Boston

Many travellers dream of taking the Great American Road Trip and travelling the highway from town to town across the United States. How about taking the journey in the form of a cross-country bus trip? 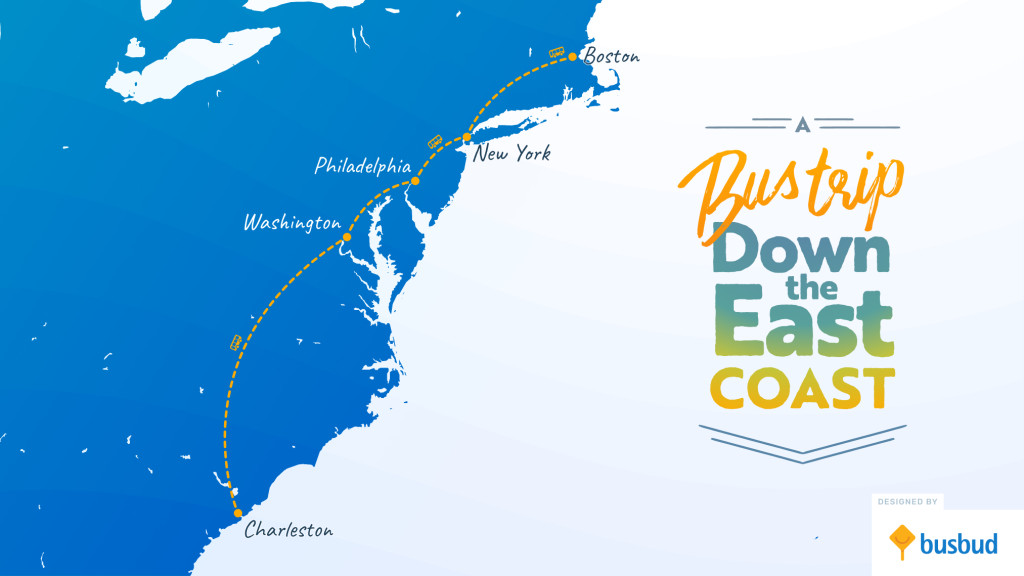 Travelling by bus lets you leave the “how are we getting there” part of the planning to the experts – all you have to do is sit back and enjoy the ride. Companies, like Greyhound and Megabus, have established many routes across the country and are popular with students and budget travellers, while Greyhound, the biggest bus company in the country, has a combination of bus lines that makes it possible to go nearly anywhere.

If you choose to travel from coast to coast, keep in mind the sheer size of the country. Bus rides through the middle of the US can stretch 15 to 20 hours or longer. If you have limited time or patience, it is better to choose one region of the US to explore thoroughly. The following bus trip concentrates on the East Coast of the United States, which is rich in historical and interesting cities.

Bus companies coverage in the US

Greyhound bus company has the largest coverage in the United States, with more than 260K bus routes and 16K daily departures in the US and in Canada. You can go from East to the Weast coast only with Greyhound buses! Founded in 1914, Greyhound offers cheap bus trips across the US from convenient bus stops in big and small cities.

BoltBus operating intercity non-stop buses in the northeast and the west coast of the United States since 2008. With the BoltBus buses, you can also go from the US to Canada by booking a trip from Portland to Vancouver. BoltBus is owned by Greyhound Lines, Inc, so don't be surprised to see Greyhound buses during your trip.

Bestbus operates affordable buses with coverage in the northeast states and cities of the US (New York, Virginia, Delaware). With BestBus you can easily plan a trip from New York to Washington D.C. by bus. BestBus have departures from many convenient bus stations such as Penn Station in NYC or Dupont and Union Station in Washington D.C.

Ourbus operates intercity buses, launched in 2016 the coverage of buses is spread across the United States. The cities where you can find many Ourbus departures are Washington DC, New York and Philadelphia. Ourbus coverage is primarily in the northeast of the United States but you can book also bus tickets in Connecticut, Florida and many other states in the US.

RedCoach operating affordable and comfortable buses across Florida. Since 2010, with Red Coach large coverage in Florida you can easily book your bus tickets to do a trip between many cities and places in Florida; Miami, Orlando, Fort Lauderdale, West Palm Beach.

Busbud.com makes it easy for you to find, compare and book city-to-city bus tickets, all over the world. We save you the extra trip to the bus station. Use Busbud to book your trip online, in your own language and currency, wherever you are. Busbud prides itself on its worldwide partnerships. We make it possible for you to buy tickets with its large network of trustworthy bus partners like Greyhound, Eurolines, ALSA, OUIBUS (BlaBlaBus), National Express and many others.

What are the top visited cities in United States?

Plan your next bus trip in United States