Book Central Argentino Bus Tickets for your next trip

With our coverage of all available Central Argentino bus lines, we make sure you are able to get to where you need to be.

Get the best available deal by using a promo code to obtain Central Argentino discounts on tickets.

On Busbud, you'll be able to find useful information such as Central Argentino contact details in case you need to get in touch with them. 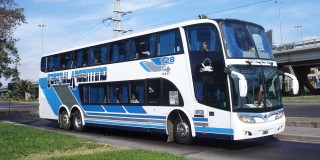 User reviews from travelers who booked their tickets with Central Argentino

Lovely and friendly staff, disgusting bus. Dirty and old (a roof window broke during our bus ride). And, of course, we arrived very late at our destination.
Puerto Madryn to Comodoro Rivadavia

January 29, 2020
Old desgusting busses that need an upgrade. The "semi bed" was just a regular chair that couldn't even bend back as much as the other chairs. Really bad!
Rosario to Mendoza

July 31, 2019
Bus broke down one hour after departure, no replacement bus was sent, had to do multiple changes through the night making the planned 13 hours journey lasting 17,5(!) hours and super tiring. No WiFi was available for passengers even if they had a staff WiFi in range. But at least the staff was helpful and did what they could.
Rosario to Mendoza

July 27, 2019
A truly awful service, no food, no WiFi, no charging points for phones and no toilet paper in the filthy toilet.
Mendoza to Buenos Aires

April 3, 2019
I did order a ticket that including hot meal and i have paid extra money for that but i didnt get nothing!
Mendoza to Rosario

January 15, 2019
When I booked the ticket I paid for the option with a meal - however no meal was provided &I was hungry all night
Mendoza to Buenos Aires

November 21, 2018
No hot meal as in description, old, dirty & uncomfortable. 2h too late at the arrival
Buenos Aires to Mendoza

November 11, 2018
The bus departured 15 minutes too late but we arrived in time. Toilet on the bus was dirty and disgusting.
Bahía Blanca to Puerto Madryn

October 15, 2018
I never once saw a staff member once I was on the bus. I paid the upgrade which stated I would get a meal as well as entertainment which there were none of either. The bus also arrived an hour and a half later than scheduled. A really bad experience.
Buenos Aires to Mendoza

October 3, 2018
I did not get the seat or extras that I paid an extra 400 pesos for. I would like a refund of that difference.
Buenos Aires to Mendoza

July 13, 2018
Bus was cramped and got no stops on a 13 hour bus. I also left my phone on the bus and the staff stole it (I was last off the bus and they denied it was on there). And they also wanted 30 pesos each (me and my friend)for us to board even though we had a ticket already. Never using this company again
Rosario to Mendoza

Busbud is a bus search tool - we include Central Argentino routes, schedules and prices in our searches along with many other bus companies. You can compare prices, amenities and times by searching for a route. If you find a suitable trip, you can go ahead and get your Central Argentino ticket from us. Note that buses sell out, Central Argentino and other operators generally charge a lot more for last minute tickets or for tickets bought in person.