Megabus UK is one of the biggest coach operator in the United Kingdom. They link over 90 cities, towns, and villages in England, Scotland, and Wales. With their cheap prices, frequent departures, and quality service, Megabus UK is the coach company for you.

Megabus coaches offer some of the best services in Europe. All of their vehicles are equipped with free WiFi, charging points at every seat, A/C and an on board toilet.

Busbud has been an authorized seller of Megabus UK bus tickets since 2015. Busbud helps you compare, find, and book cheap Megabus bus tickets. You can easily compare all schedules and ticket prices on Busbud. For your next trip, choose the bus and book on Busbud. It's simple, fast, cheap, and environmentally friendly! ‏‏

With Megabus, you will able to travel and explore cities such as London, Manchester, Edinburgh, Newcastle, Cardiff, and many more. With routes all over England, Wales and Scotland, you're sure to find what you're looking for with Megabus. Whether you'll be commuting, visiting friends and family or going on holiday, Megabus will have a bus for you. 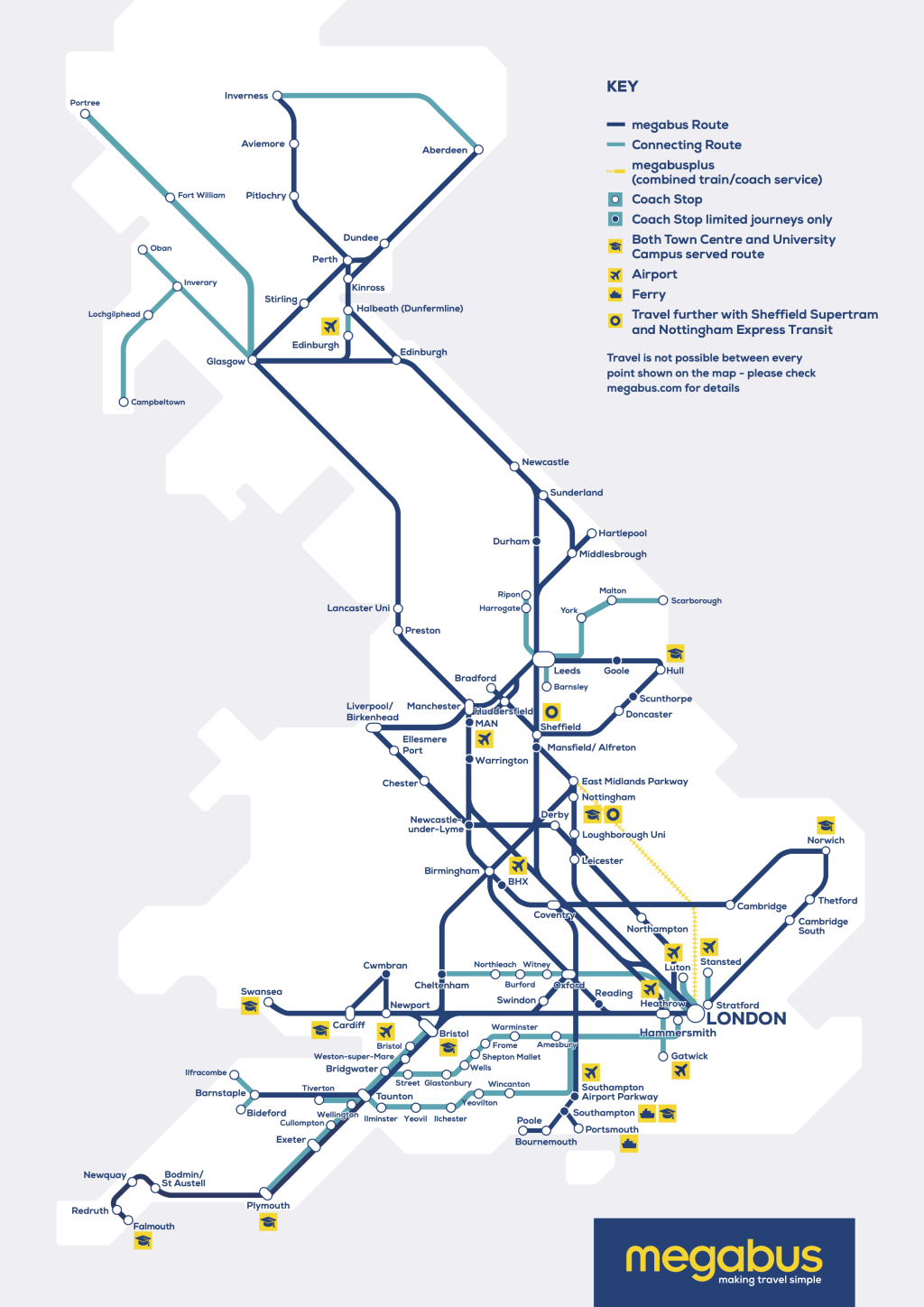 Routes and connexions may change related to the local COVID-19 regulations. Please run a search to see all available buses.

With Busbud, it is very easy to book a Megabus ticket: you simply need to fill in the details of your trip in our search bar (dates of travel, departure and arrival cities, numbers of passengers) and click on Search now. Then, select the Megabus bus that suits you best and securely complete your booking on Busbud.

User reviews from travelers who booked their tickets with Megabus UK

Bus was late, driver was ok but clearly stressed because the AC wasn't really working and the bus was so hot.
Heathrow to Bristol

7 May 2022
The coach driver was very helpful and polite, he helped me with my luggage and was a very pleasant driver. I will choose MegaBus again and again.
Heathrow to Cardiff

5 May 2022
A journey that should have been simple made a nightmare. Got to destination 1hr and 40 mins late
Leeds to Birmingham

29 April 2022
Heater was not working everyone was shivering, lot of noise from the bus interior due to lack of maintenance , lights was not dimmed enough for the sleep at night very worst travel experience
Edinburgh to London

27 April 2022
That was possibly the worst bus journey I have ever been on. There was no mega bus sign anywhere on bus or staff they didn’t ask to see my paperwork when I asked if this was a mega bus they told me to get off then and got very aggressive with me. The assistant was barely able to speak when I asked if he was the driver he was either high or drunk. The bus was freezing cold I was alone for the first 20 mins and I literally felt scared. They then stopped for 30mins in Taunton at a travel lodge. Said we’re stopping here for 10 mins.. they were on there phones straight away looked like they were picking up gear it was so dodgy!! No one felt comfortable at all! We talked amongst ourselves and we’re worried we would be late. The driver was rude and aggressive. I will never travel with mega bus again.. terrible journey even if somehow they made up for lost time they were the worst employees for a company I’ve ever seen!
Falmouth to Heathrow

25 April 2022
Failed to provide a working telephone number or staff on site. The email service was clueless. They did not know that the bus had not left on time. I will never use Megabus until it has a working phone line. This is billy basic for a bus company.
Heathrow to Bristol

22 April 2022
The bus was only a few mins late due to traffic hold up around the split level section of the M5 so not drivers fault. I thought the driver very good and explained everything clear and precisely and very helpful.
Barnstaple to Bristol

17 April 2022
Brilliant journey, it was so easy and our driver was so helpful and informative, I would certainly use Megabus again in the future.
Bournemouth to Heathrow

17 April 2022
My bus was late for 1 hr 30min and no staff to talk to. Also, find empty bottles in the bus
Manchester to Glasgow

17 April 2022
I wouldn’t recommend it. It was late leaving Heathrow & there was absolutely no information on screen about the fact that it might be delayed. Also there was no one to ask. The few people around wearing high vis vests just kept saying “it’s not here yet”. If I knew it might be late it would have helped. Couldn’t see a toilet in that awful bus station either. A grim start to my holiday. The drivers changed in Swansea & the Welsh driver was friendly & communicated appropriately with the passengers.
Heathrow to Swansea

15 April 2022
Online prices are higher than buying the ticket on board. Those busses are unlikely full, so no point of booking online beforehand. I paid an extra £4.50 paying online.
Gatwick to Heathrow

11 April 2022
Driver was brilliant, we felt safe and looked after even when the lorry in front of us blew a tyre on the motorway
Leeds to Sunderland

7 April 2022
I am a visitor and was advised to book Megabus to Coventry but unfortunately the bus never arrive for the trip until a staff advised me to opt for a train where I made another payment. It was quite unfortunate for the dissapointment.
Birmingham to Coventry

22 March 2022
The bus was only 10 mins late. It was 2.40pm which is peak traffic time for schools finishing, So heavy traffic was to be expected. I wasn’t quite sure what bay at Newcastle Under Lyme the bus was to leave from as nowhere said Megabus, it did National Express on one of the bays but this is confusing especially for a nervous traveller. The driver was polite and helpful. The bus was quite full but it was comfortable and warm. There was a very annoying high pitched beeping noise for at least half of the journey. It wasn’t continuous but happened about every 1 minute or so. I wasn’t quite sure if it was something the lady opposite had in her bag ( she didn’t seem to be bothered by it) or something on the bus. I was sat in the middle by the steps to the toilet and middle door, the opposite side to the toilet. In all an easy enjoyable , affordable journey.
Newcastle-under-Lyme to Bristol

18 March 2022
I've only started using Megabus after many years of using trains for travelling to Aberdeen from Glasgow. I have so far been really impressed.
Glasgow to Aberdeen

18 March 2022
This is my first time of using your service, and I must confess am a happy customer who would call again soon.
London to Manchester

18 March 2022
The driver assured us that he could complete the journey to Heathrow - I have everything in hand, he said, just sit back and relax - until we arrived at Birmingham where we were told that our journey had ended. He would return to Liverpool, otherwise it was sort yourselves out with your onward travel.
Liverpool to Heathrow

18 February 2022
The bus was in time, the bus driver was very helpful with my enquiries and I had a very pleasant journey !
Bristol to Exeter

11 February 2022
Bus from London to Leeds never turned up, left stranded late at night, very frightening for a young woman on her own
London to Leeds

10 February 2022
Disgusting and disrespectful, one hour late, horrible conditions, rude and careless driver. I nearly lost a job interview because of his incompetence, he was an hour! an hour late! He should be fired for this! Hi
Dundee to Glasgow

8 February 2022
The service from Portsmouth ran out of fuel Whilst on the motorway which was extremely upsetting and unacceptable. We were subsequently and by chance offered a lift to Manchester by a passing third party company namely the National express. As a consequence I arrived in Manchester Victoria station some 2.5 hrs late, at arround 1820 hrs plus I could not get off at Manchester Airport which was my intended destination. Thetefore in Opinion the Megabus company have failed to provide the service I had paid for and as a result caused a lot of anxiety and undue stress to myself and my host in Manchester.
Portsmouth to Manchester

7 February 2022
Good service but should be more specific about bus stand. My ticket says G but u was picked up at C which was kinda frustrating for me
Kingston upon Hull to Manchester

Is there WiFi on Megabus?

Yes, WiFi is available on all Megabus coaches and is free!

Can I exchange my Megabus coach ticket?

You can exchange your Megabus ticket directly on the Megabus website, up to 24 hours before your original departure.

Does Megabus allow pets on board?

No. Only Assistance Dogs are allowed on Megabus coaches. ‏‏‎

Can I bring my bicycle or sports equipment on Megabus coaches?

You can only bring a bicycle or equipment if it can be folded or packed in a box that does not exceed 200cm (width + height + depth).

Does Megabus have a toilet on board?

Yes, there is a toilet on every Megabus coach.

Do I need to print my Megabus coach ticket?

Are there plugs or electrical outlets on Megabus coaches?

Megabus coaches have charging points at every seat, so you can charge your gadgets along the way.

Busbud is a bus search tool - we include Megabus UK routes, schedules and prices in our searches along with many other bus companies. You can compare prices, amenities and times by searching for a route. If you find a suitable trip, you can go ahead and get your Megabus UK ticket from us. Note that buses sell out, Megabus UK and other operators generally charge a lot more for last minute tickets or for tickets bought in person.