What are the most popular bus routes to Indianapolis?

What bus companies operate from Indianapolis?

Buses from Indianapolis to Chicago for $38

When you book a bus trip from Indianapolis to Chicago with Busbud, you pay an average price of $38. There are 13 scheduled buses per day. The bus trip takes an average of 4h 10m. Departures are between 5:00 AM and 6:05 PM.

Buses from Indianapolis to New York for $184

Each day 8 buses connect Indianapolis to New York. The average travel time for this route is 23h 9m. When you book with Busbud, you can expect an average price of $184. Daily departures are between 3:40 AM and 10:20 PM.

Buses from Indianapolis to Columbus for $61

You can take the bus from Indianapolis to Columbus for an average price of $61. There are 7 buses operating this route every day. The earliest bus leaves at 6:45 AM and the latest bus departs at 11:35 PM. The average travel time for this route is 4h 25m.

Buses from Indianapolis to Cincinnati for $30

Ready to see all that Indianapolis has to offer? 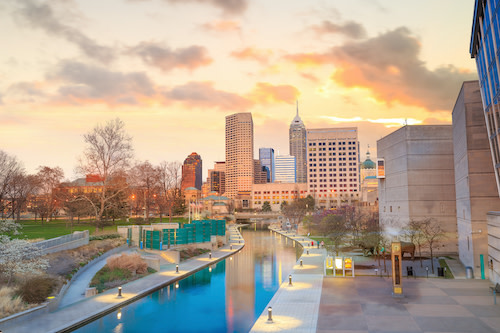 Whether you're visiting for a legendary event like the Indianapolis 500 or you can't wait to explore one of the many museums and parks in Indianapolis, you'll want to plan a hassle-free trip. Book a bus ticket from cities near or far, and get to Indianapolis quickly and easily.

Things to do in Indianapolis

See the cultural side of the city with a visit to the Indianapolis Museum of Art, home to about 55,000 works of art that span 5 millennia. Learn about Native American history and culture at the Eiteljorg Museum, and take the kids to the Children's Museum of Indianapolis for some interactive fun. You'll find several of the city's best attractions along the scenic Central Canal.

From museums to sports teams, Indianapolis doesn't disappoint. Book your bus ticket in advance or at a moment's notice, and get ready to have a great time in Indiana's capital city.

Where are the popular bus stations and stops in Indianapolis?

Busbud helps you easily search, compare and book intercity bus tickets on a worldwide scale with our comprehensive list of bus routes and schedules. Use Busbud to book your trip online, in your own language and currency, wherever you are. Busbud partners with safe and reliable bus companies throughout the world such as Greyhound, Eurolines, ALSA, OUIBUS (BlaBlaBus), National Express and many others so you can buy tickets without a worry.

Popular bus routes to and from Indianapolis