Book Bolivariano Bus Tickets for your next trip

Find and book the cheapest Bolivariano bus tickets online with Busbud. Thanks to our large inventory and using our sorting and filtering features, you'll be able to find the best Bolivariano fares easily.

We let you sort through Bolivariano schedules and Bolivariano bus ticket prices to find a deal suited to your individual needs.

Find out which amenities will be accessible on a Bolivariano bus for each individual departure when you book your Bolivariano tickets, such as WiFi, A/C, power outlets and more.

Get the best available deal by using a promo code to obtain Bolivariano discounts on tickets.

Need to contact Bolivariano customer service? Busbud provides you with Bolivariano phone number so you can easily reach out to them.

With our partnership with Bolivariano, Busbud is able to offer reliable Bolivariano bus services to help you travel comfortably and securely. 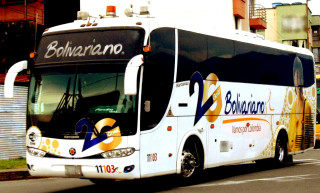 User reviews from travelers who booked their tickets with Bolivariano

27 February 2022
Bus didn't stop for lunch, no stop for breaks/toilets either. No communication to the passenger if there was gonna be any breaks/lunch stop. Bus is not clean, toilet is very dirty and it stinks
Bogotá to Medellín

28 January 2022
Extremely late, took extreamly long with too many stops, and it arrived at another terminal, not the one written in the ticket
Cali to Medellín

30 December 2021
1- the driver should be more gentle whilst driving(full throttle and brake hard). it would been much nicer ride. 2- if he would switch of the ventilation whilst driving behind a diesel truck, the exhaust would not be so dominant present in the bus and not making many people having headache me inclusive. 3- the suggestion is that the busses in the stations don't let the engine run whilst standing still it would be much more supportive for the environment. we contribute with our CO2-rate to save the environment but paradoxically all the buses are running their engine during waiting time, what is the use of a policy like that?
Bogotá to La Dorada

20 August 2021
It was my first time on a bus in Colombia. I would use the service again. Thanks
Ibagué to Bogotá

13 December 2020
The onboard bathroom always smelled very bad. The toilet did not flush. No running water to wash my hands.
Cali to Ipiales

16 March 2020
This particular bus did not have a partition between the driver and the passengers. The driver played loud music during the 24 hours. This woud not have mattered if there had been a partition to block the noise. I asked him to turn the music down and he turned it off for a short while, while we left the bus but it came back on. I could not sleep because of this and that is why I marked only 3 stars.
Ipiales to Medellín

28 January 2020
the bus driver listened music de whole night very loud and refused to turn it down despite of the customers who were already asking to have a quiet night. He was also really impolite when we asked him nicely.
Cali to Pasto

27 January 2020
Boarding process was confusing and little or no information from staff. Bus was FREEZING
Bogotá to Armenia

23 January 2020
Fine, the bus was late but on christmas i expected nothing else, just 1.45h late.
Medellín to Bogotá

27 December 2019
Good experience riding with Bolivariano. But I would have liked if the seats had a place to charge phones.
Medellín to Bogotá

13 December 2019
Very comfortable first class seats but was unclear on booking what first class was vs comfort seats. WiFi onboard did not work.
Armenia to Bogotá

3 December 2019
Hi, l really enjoy bus trips for sight seeing and going from Bogota to Medellin is a great experience, the buses are comfortable, prices fair and there is usually some sort of entertainment which helps break up the long hours. I have boarded quite a few of Bolivariano buses and l have to say it is the most stressful part of my trips being at the bus terminal, l make sure to get their way ahead of time as there is absolutely no direction or communication from staff, l only get a (dismissive) wave of hands in a general direction with no follow up, my last ticket said gate 25 but there were only 24(??) numbers to be seen and no staff anywhere to assist with this, l was feeling a bit sick with concern that l may not work out where my bus would be in time as l had a flight to catch at my destination, l dont mind and allow for buses arrving late to their desitintion when its such a long trip but would dearly love some clarified direction and present and informative staff at a huge bus terminal (l have a few times seen local people looking confused and even approaching me for assistance), but l endure as l really enjoy bus trips when travelling
Medellín to Bogotá

2 December 2019
The bus was nice and comfortable. Of course the ac is always on full blast...but I guess that is everywhere.
Armenia to Bogotá

21 November 2019
Perfect journey. First time I've been on one of your buses where the Aircon wasn't freezing. Finally a bus I could sleep on 🤙
Medellín to Cali

21 November 2019
Unfortunately we didn’t have a great experience from Bogota to Medellín. The bus was comfortable at least and played movies. We had a 6:40am bus scheduled to arrive in Medellin at 4:40pm. We left at 7:00, and we were not even in Manizales by 4:40pm. Which Ian nearly 4 hours away from Medellín. Unsure why this was because at that point there hadn’t been no stand still traffic. It was past Manizales that we hit stand still traffic 3 different times. Traffic is understandable, there is not controlling that, but the fact that we were so far behind prior was frustrating. We at least had enough water. There were no updates or explanations. We arrived in Medellín at 10:40pm.
Bogotá to Medellín

21 November 2019
Seats were extremely uncomfy. Air conditioning was dripping on my head, bus driver constantly beeping the horn all though the night and constantly stopping. Bathroom was disgusting, whole back of the bus smelt like urine. Worst overnight bus trip i have ever had!
Armenia to Bogotá

15 November 2019
The bus drove too fast in a massive rainstorm with incredibly wet roads, there were numerous times when myself and two other passengers we drove with felt unsafe. He was cornering like a race car. We arrived an hour and a half early, I’d have rather they drove safely and we arrived on time.
Bogotá to Armenia

15 November 2019
Driver drove very badly, way too fast and turned on and off the air condition all the time
Bogotá to Armenia

13 November 2019
Bolivariano staff were very good. However our bus journey was a lot longer than estimated time. Our journey to Salento was then 12 hours instead of estimated 10 hours.
Bogotá to Armenia

18 October 2019
Staff were excellent and the seats reclined really low. Only problem was that the WiFi didn't work and there were no power sockets. Otherwise it was great.
Bogotá to Cali

14 October 2019
A 10 hour bus with no charging ports is a joke. I also misplaced my luggage tag so the guy said I had to pay him, which I knew couldn’t be true, so I gave him what was in my pocket and he told me to get off the bus.
Medellín to Cali

Busbud is a bus search tool - we include Bolivariano routes, schedules and prices in our searches along with many other bus companies. You can compare prices, amenities and times by searching for a route. If you find a suitable trip, you can go ahead and get your Bolivariano ticket from us. Note that buses sell out, Bolivariano and other operators generally charge a lot more for last minute tickets or for tickets bought in person.