Book OCC Bus Tickets for your next trip

Wondering how much are the cheapest OCC bus ticket? Find out with Busbud's extensive list of OCC fares.

We let you sort through OCC schedules and OCC bus ticket prices to find a deal suited to your individual needs.

Busbud shows you which amenities are included with your OCC bus for each individual departure.

With our coverage of all available OCC bus lines, we make sure you are able to get to where you need to be.

Get the best available deal by using a promo code to obtain OCC discounts on tickets.

With information like OCC phone number or the closest OCC bus station, Busbud makes sure you get easy access to all the important information.

Busbud is proud to partner with OCC and to offer OCC services to travelers all over the world. 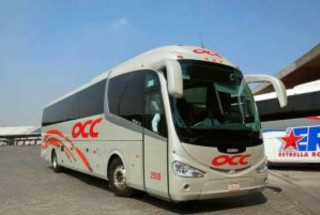 User reviews from travelers who booked their tickets with OCC

July 26, 2022
The bus route from San Cristóbal to Palanque should be direct. It should not take over 9hrs.
San Cristóbal de las Casas to Palenque

July 2, 2022
Terrible conditions, loud tv, loud music and freezing cold air condition. At one point it got down to 18 degrees delicious. It was freezing. Not good ADO
Pochutla to San Cristóbal de las Casas

May 17, 2022
We weren't satisfied, the bus was super super cold so we got both sick from the AC. Plus the bus broke down and we had to take collectivo and taxi to get to Oaxaca.
Puerto Escondido to Oaxaca

May 12, 2022
I liked everything besides many stops and also numerous police checks when the whole bus turned the lights up and I couldn't sleep on something that is called night bus.
San Cristóbal de las Casas to Puerto Escondido

May 4, 2022
The driving was crazy. It felt like, we were going to be killed. I also threw up at some point because of transport sickness. When we left the bus after 12 hours early in the morning, the chauffeur yelled at us because he thought we were to slow, even though he had only announced the arrival 5 minutes before. Bad experience!
San Cristóbal de las Casas to Puerto Escondido

April 30, 2022
No aircon in a 14 hour bus ride where it was 30 degrees. Everyone was sweating. When asked to the driver to turn it on he did it only for 30 minutes.
Puerto Escondido to San Cristóbal de las Casas

April 19, 2022
It was very disturbing that there was 3x a check by men with all the light on. The last men did even a check with video camera, not good for private feeling!
San Cristóbal de las Casas to Pochutla

April 10, 2022
They should not offer an overnight bus from palenque to san cristobal if they are going to have so many stops where they wake everyone up. We were woken up 3 times to get our passports checked and then shaken awake a 4th time at 2am by the driver. We all had to get off the bus and wait in a bus station for 15 minutes and the driver did not explain why. Staff was rude and unhelpful. We got maybe 1 hour of sleep the entire ride. I would not recommend this bus service to anyone.
Palenque to San Cristóbal de las Casas

April 8, 2022
The bus was stopped 5 times en route to San Cristobal. Tourists were stopped and asked for passports three times by police and no support was provided by staff. When the bus was cleaned twice in the night (once shortly after leaving the first destination and once an hour before the final destination) all passengers were woken up and removed. Finally the bus was taken away for 30 minutes at the first stop with all passengers removed and no explanation. I would not recommend using OCC to any travelers in this area based on this trip.
Palenque to San Cristóbal de las Casas

April 6, 2022
Just stick to driving. Point A to point B. They kicked us off the bus half way through the trip while everyone was sleeping to ‘disinfect’ the bus. They used the dirtiest ‘mop’ I’ve ever seen in my life and spray some chemicals into the bus. When everyone got back on we breath in ‘what ever the chemical was’. Other then that the bus was on time a did what it was meant to do. They definitely don’t need to ‘clean’ the bus half way through the trip. Seems insane to me.
San Cristóbal de las Casas to Palenque

March 30, 2022
The entire journey films were shown. There were no earphones so the noise of the films was loud and incessant.
San Cristóbal de las Casas to Palenque

March 28, 2022
This is a great way to travel throughout Mexico. The buses are comfortable and they stop for bathroom and food breaks along the way. I've traveled with OCC three times now and would highly recommend it.
San Cristóbal de las Casas to Mexico City

March 20, 2022
Travelled with ADO/OCC for the last month as a tourist, this has been worst experience so far.
San Cristóbal de las Casas to Palenque

March 18, 2022
Not a smooth ride at all. Being on the bus for 6 hours, made me, and two other travelers very sick. Not a pleasant ride
Cancún to Mérida

March 4, 2022
The bus was OK, but somebody steel our backpack with valuables. We could not make complain. Unfortunately we do not speak spanish.
Pochutla to San Cristóbal de las Casas

March 3, 2022
It was a standard bus journey, I'm only dissatisfied because someone was able to steal my speaker from my bag underneath the bus.
Pochutla to San Cristóbal de las Casas

February 28, 2022
I'm from the United States I rarely if ever use buses there. To my knowledge cross country bus service has gone downhill. They should learn from Mexico. If the service there was as good as here I'd probably use them.
Oaxaca to Pochutla

February 26, 2022
Six and a half hours is a really long time to ride, with a 20 minutes break at 90 minutes into the ride. Backroads route was quite perplexing, twists and curves nerve wracking.
San Cristóbal de las Casas to Villahermosa

February 24, 2022
Most amazing trip . Was a little hesitant but wow I am just shocked how amazing and comfortable this ride was . Would recommend it to anyone . Amazing and so worth it for sure
Tuxtla Gutiérrez to Oaxaca

February 22, 2022
The journey was fine apart from the driver refusing to turn down the hardcore techno music he was playing through the radio from 3:30am onwards, preventing a lot of people from sleeping. Despite asking to turn it down, he just kept saying he didn’t understand, which he clearly did.
Oaxaca to San Cristóbal de las Casas

February 9, 2022
The toilet was dirty. It was a night bus, yet loud films and music was played during the entire journey making it impossible to sleep. And it arrived 2 hours late.
Oaxaca to San Cristóbal de las Casas

February 5, 2022
We were robbed and it took more than an hour before a new bus came, and it was so scary! They robbed all of our money
Palenque to San Cristóbal de las Casas

February 1, 2022
The staff were not very polite or accomodating to say the least. They were dismissive when I didn’t have wifi to retrieve my bus ticket and insisted to speak to me in english although I speak and understand Spanish perfectly well. When I asked the driver if there were time to buy a drink at one of the stops he said it wasn’t his problem if I wasn’t back in time and they would drive off without me. When waiting to get my luggage, the staff were hesitant and were about to serve the people behind me before me. To top it off, during the whole trip, there were movies playing with high volume from start to finish - which many people were dissatisfied with and asked to have turned off, which the driver in a dry way responded, was impossible - a long with music playing by the driver. All in all, very disturbing busride with a lot of noise, which I did not expect when selecting this option due to the level of comfort I was expecting to be accomodated.
Puerto Escondido to Oaxaca

January 19, 2022
We had the front seats and the second driver was listening extremely loud to music,we told him to lower the music but after a while it got louder again. We couldn’t sleep at all and our bags and stuff inside is wet!
Pochutla to Oaxaca

January 18, 2022
Clean, spacious buses, punctual and staff were friendly and helpful. One driver played pretty loud music into the early hours of the morning (on the last leg to PE, 3-7am, 14 Jan) while I was trying to sleep which was a bit inconsiderate. Otherwise fine
San Cristóbal de las Casas to Puerto Escondido

January 14, 2022
Comfy bus which arrived in time. Any chance of a 10% discount for the next trip we're skint
Puerto Escondido to Oaxaca

January 10, 2022
A good service. I had inadvertently made a booking for a different date and the issue was swiftly resolved at no additional cost.I have used OCC-ADO regularly when travelling in Mexico and have no hesitation in recommending.
Mexico City to Puerto Escondido

Busbud is a bus and train search tool - we include OCC routes, schedules and prices in our searches along with many other train and bus companies. You can compare prices, amenities and times by searching for a route. If you find a suitable trip, you can go ahead and get your OCC ticket from us. Note that train tickets sell out, OCC and other operators generally charge a lot more for last-minute tickets or for tickets bought in person.