What are the most popular bus routes to San Antonio?

We've found the top bus routes travellers take to get to San Antonio! Every day our bus partners (Greyhound, Turimex Internacional) bring people from major cities to San Antonio. Enjoy the convenience of taking the bus to San Antonio!

One of the main stations in the city is the San Antonio Bus Station, which is conveniently located downtown on North Saint Mary's Street. It is near many great places to eat, and it's also close to the beautiful San Antonio Riverwalk.

The other intercity bus station is the Turimex terminal, which is also downtown and only a 12-minute walk from the Greyhound station.

Ready to see all that San Antonio, Texas has to offer? 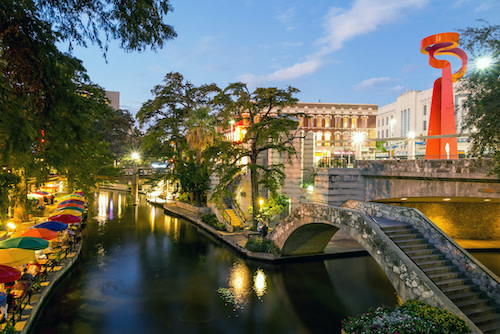 San Antonio, Texas is a thriving city that is fun to explore thanks to its rich cultural heritage. It is home to great food, friendly people, and so much more. If you're heading to San Antonio, one of the most convenient and affordable ways to get there is via bus.

You can't visit San Antonio and not spend some time on the city's Riverwalk. This downtown waterfront area has tons of places to shop, dine, and explore. Along the walk, you'll find exciting places like the San Antonio Museum of Art, Brackenridge Park and Golf Course, the Convention Center, Market Square, and the Tower of Americas. You could easily spend a whole day or more exploring the Riverwalk. You can even catch a river taxi when your feet get tired!

Another one of the city's most famous attractions is the Alamo, which began as a Spanish mission but became widely known as the site of the famous Battle of the Alamo. Today it is a fascinating museum where you can step back in time and contemplate the area's rich history.

Want a thrill? SeaWorld San Antonio is full of magnificent animals and fun rides. For excitement of a different kind, head to the Natural Bridge Caverns, where you can head underground and explore one of the nation's most fascinating geological sites.

San Antonio is eager to welcome you.

Whether you like history, shopping, nature, or anything else, you're bound to find something in the city to please you. To make your trip as stress-free as possible, why not leave your car behind and take the bus? Busbud makes it a breeze to reserve your seat.

Where are the popular bus stations and stops in San Antonio?

Popular bus routes to and from San Antonio

Busbud.com makes it easy for you to find, compare and book city-to-city bus tickets, all over the world. We save you the extra trip to the bus station. With several language and currency options available, Busbud seeks to cater to international bus travellers no matter where they are in the world. Busbud prides itself on its worldwide partnerships. We make it possible for you to buy tickets with its large network of trustworthy bus partners like Greyhound, Eurolines, ALSA, OUIBUS (BlaBlaBus), National Express and many others.