Book OurBus Bus Tickets for your next trip

Find and book the cheapest OurBus bus tickets online with Busbud. Thanks to our large inventory and using our sorting and filtering features, you'll be able to find the best OurBus fares easily.

Conveniently search for OurBus bus schedules and OurBus prices to choose an option that best suits your needs.

Find out which amenities will be accessible on a OurBus bus for each individual departure when you book your OurBus tickets, such as WiFi, A/C, power outlets and more.

All OurBus bus lines are available on Busbud. Can't seem to find the OurBus route you're looking for? Please get in touch, we have a dedicated team that is in charge of the quality of OurBus mapping on Busbud.

Get the best available deal by using a promo code to obtain OurBus discounts on tickets.

Need to contact OurBus customer service? Busbud provides you with OurBus phone number so you can easily reach out to them.

With our partnership with OurBus, Busbud is able to offer reliable OurBus bus services to help you travel comfortably and securely. 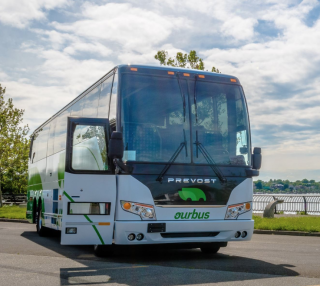 It was inappropriate that 40 people were slated for such a small van. We literally sat on our bags with aching knees and toes all trip long.
Syracuse to Ithaca

November 30, 2022
I was very disappointed that the bus was not on time and when it arrived we were not given any reasoning as to why. I waited over an hour since the ticket told me to be 15 minutes prior to pick up.
Philadelphia to State College

November 29, 2022
Could not find ourbus at the station, turns out the bus company was megabus, very confusing
Boston to New Haven

November 27, 2022
Clean Bus very nice driver but I wish he would’ve came on time we were standing in the cold
Austin to San Antonio

November 27, 2022
Bus arrived on time but we left 20 min late. Bus sat at each stop for several minutes and we arrived late at each stop so no idea why we waited.
Washington to Newark

November 27, 2022
I don’t blame our bus driver for being late he couldn’t control traffic so I am extremely satisfied with OurBus and I will be traveling with them again!!
Orlando to Atlanta

November 24, 2022
Got an email that the bus would be late by about 15mins. Turns out the bus was late by 1 hour exactly! And we were out there in the cold at 3 Degrees Celcius for a whole hour!
New York to Cleveland

November 24, 2022
driver was good but seemed to have a lot of confusion and difficulty with matters regarding the situation.
Philadelphia to Washington

November 24, 2022
Bus was reasonably comfortable. For some reason like 15 minutes late I guess they were waiting for other people to arrive dropped us off in Newark New Jersey at a quite unsafe place at night. They could’ve easily drop this off somewhere that was better lit. That should’ve taken into account.
Boston to New York

November 23, 2022
A bus ride that was supposed to be 6:40 to 2:55 ended up being 6:40 to 5:40. I will never be taking a bus ever again and will cancel my return trip. During the ride, the coolant line broke and left us stranded for around 2 hours. Very poor service.
Buffalo to New York

November 23, 2022
Emailed tickets and app itinerary said different things. Made knowing when and where the bus was leaving very confusing.
Boston to New Haven

November 22, 2022
At first the bus departing from Toronto was 30 minutes late and there was no reliable boarding place. It was more like a pick spot at the side of street. The toilet in bus was very dirty as well. No one ever cleaned it.
Toronto to New York

November 22, 2022
The bus only arrived late because there was an accident, normally it’s always on time or arrive earlier than scheduled
New York to Hellertown

November 21, 2022
The bus arrived 45 mins late, there was an issues with the number of people on the bus so they made us get off and reboard and after almost an hour of this we finally got going, only to have the roof leak the entire ride
Ithaca to New York

November 12, 2022
I can only speak of an experience for the first bus in the morning. It was difficult to know where exactly to wait for the bus. The check in process could certainly be improved easily. Can't complain because of the price and convenience.
New York to Philadelphia

November 7, 2022
The bus driver was not accommodating at all, I know there’s a schedule to follow but my friend was literally one minute away
New York to Philadelphia

October 26, 2022
Will never take again this bus which does not have any phone charger, wifi and reading light. No sign to indicate the bus stop.
Newark to Washington

October 24, 2022
The bus left on time, but because some passengers were late at the stop, they had to wait in Pilot for more than 45 minutes. We delayed our trip and we were late to our house.
Reading to New York

October 24, 2022
The driver from Syracuse to Albany was great. The driver from Ithaca to Syracuse was very unsafe. When she picked us up she got off the bus and screamed “IDIOT” at another bus that was parked in her spot. This trip was full of driving much too fast, swerving off the road, slamming on the breaks—she slammed on her breaks when stopping too late for a red light, stopped in the middle of the intersection, and almost backed into another car trying to back up. I’ve never worn a seatbelt on a bus, but I am on this one. This driver is not safe and needs to be disciplined/removed from the road before she hurts or kills someone.
Ithaca to Albany

October 22, 2022
All was good but the driver did not drop passengers off at the spot that was on the app. There were lots of cars waiting for students coming home from binghamton and we all got calls from our children from a different place in White Plains.
Binghamton to White Plains

October 20, 2022
The ride itself was just ok. There was no wifi, no tv screens working or turned on, no lock on the bathroom door, no hand sanitizer in the bathroom. There were two additional stops in towns before Indianapolis and there was no mention of that in the itinerary when buying the tickets.
Chicago to Indianapolis

October 16, 2022
The bus ride was smooth and without incident. Will definitely be using OurBus again.
Canton to New York

October 13, 2022
Bus was cancelled- I had to call to find this out. Still awaiting reimbursement.
Providence to New York

October 9, 2022
I was left behind at the rest stop 3 hours away from my destination. All of my belongings were in the bus and I was left stranded. I had to hitchhike to Buffalo with strangers who were going in the same direction, luckily. I was on the phone with Ourbus for two hours without a solution before strangers offered me a ride. I am deeply disappointed by Ourbus’ service. I will never use your bus again.
Fort Lee to Buffalo

October 8, 2022
Got email 12 hours before moving up our bus from 5 to 1, with no reimbursement or alternative option. The bus company then gave our driver the wrong pickup address so he drove past us and took 45 min to find us. Then he stood outside on the phone with the company for an extra 15 min, until we finally left very late. Very dissatisfied with the management.
Amherst to Boston

October 8, 2022
It might be a better experience to drop off passengers in a safer area of Baltimore, e.g. A train station. It felt as if we were dropped off in the middle of nowhere.
New York to Baltimore

September 30, 2022
This was my first time traveling with OurBus. The driver was very courteous and helpful and even asked if I wanted a bottle of water.
Atlantic City to New York

September 26, 2022
The bus driver never said what stop we were at /or the final stop. We were sitting on the bus asking each other
Newark to Washington

Is there WiFi on OurBus?

Yes, there is WiFi on OurBus buses! Check your emails and stay connected with friends and family during your trip with OurBus. Keep in mind that streaming is limited, so we recommend downloading your favourite shows and movies before your trip.

Are there power outlets or USB plugs on OurBus?

Yes, there are power outlets and USB plugs on OurBus. You can usually find 1 or 2 plugs per row of seats, so be a good traveler and check if your neighbour wants to charge up their devices as well.

Does OurBus have a toilet on board?

Yes, OurBus buses have a toilet on board. Toilets generally do not have running water, so we recommend bringing hand sanitizer. Remember to always hold the railing when going to the toilet in a moving vehicle.

Does OurBus offer meals or snacks during the bus trip?

There are no meals or snacks offered on OurBus buses. We recommend that you bring some snacks and drinks in a reusable water bottle for your bus trip.

Do you have to print your OurBus bus ticket?

No, you don't need to print your ticket. You can board OurBus buses by showing your e-ticket on your smartphone, along with a valid photo ID. Your ticket will be sent to you by email when booking on Busbud.

Does OurBus allow pets on board or in the hold of the bus?

Only Certified Service animals are allowed on OurBus buses. Unfortunately, your pets are not allowed on the bus or in the hold of the bus.

What are the amenities on OurBus buses?

OurBus goes the extra distance to offer best-in-class services to all travellers. You will be able to enjoy Standard seat, , Power outlets, Toilet, Wifi on their buses.

Busbud is a bus and train search tool—we include OurBus routes, schedules and prices in our searches, along with many other train and bus companies. You can compare prices, amenities and times by searching for a route. If you find a suitable trip, you can go ahead and get your OurBus ticket from us. Note that train tickets sell out, OurBus and other operators generally charge a lot more for last-minute tickets or for tickets bought in person.