My bus ride was long but comfortable and all of my drivers was very helpful.

Bus was late super late. Over crowded . Too many stops. Lay over too long plus delayed more. Staff man handled my belongings returned broken

I bought the ticket says leaving at 12:30 when I got to greyhound bus station ticket says 230

Some staff were ok, most were not, especially the security officer at Richmond Virginia I approached him and asked a question, his response “you came all the way out here to ask me that the service counter is in there “ he was rude and unprofessional and unwilling to help. Service desk person was helping someone else and I needed to walk after sitting for a long period of time.

I missed my original bus. All 3 ticket machines were inoperable. I printed my ticket out but still had to wait in a long slow line. Finally I made it to the ticket agent & she sent me to the bus. When I made it to the bus the luggage doors were closed & a gentleman was telling me that once the doors were closed they will not open them. I had to pay $20 to reschedule for the next bus. My lay over in Richmond was long & unexpected. Also communication & the signage made it confusing when employees on the floor & the lady on the microphone were giving out different information. No out let’s on the bus my phone ended up going dead...

One bus driver was a little over zealous about his time schedule and rude. The other drivers were friendly, otherwise I would have given it 5 stars on friendliness.

The first stop where we changed bus drivers the incoming bus driver was rude and late. But overall the next bus driver was extremely nice and very informative. So the first and the last bud drivers were the best. My trip was very good.

Some of the staff from Atlanta to Charlotte were disrespectful and totally dismissive of our concerns. We were stranded in Charlotte for 2 hours because the bus driver scheduling didn't work out which makes no sense to me. But our driver from Richmond to New York was great. Very concerned about getting us there on time, if everyone was on board, and our comfort. Also the bus was either freezing or way too hot

Bus Companies on This Route

Bus tickets for this route are available from $44. You can travel with Greyhound. The journey from Atlanta to New York City takes on average 21h30min. This is the time it takes the bus to travel the distance of 870 miles (1400 km) that separates Atlanta from NYC.

‏‏‎Compare and choose the ideal bus from ATL to NYC, whether you're leaving early in the morning, during the day, or taking a night bus. You will find the best prices and the departure that suits you most.

Atlanta to New York buses are provided by FlixBus and Greyhound.

How much does a bus ticket from Atlanta to New York cost?

How long is the bus ride from Atlanta to New York?

The average travel time between Atlanta and New York is around 22h 5m, although the fastest bus will take about 18h 5m.This is the time it takes to travel the 746 miles that separates the two cities.

How many daily bus connections are there between Atlanta and New York?

Which bus companies travel from Atlanta to New York?

When taking the bus from Atlanta to New York, you can travel comfortably and safely with FlixBus, Greyhound.

What are the departure and arrival stations when taking the bus from Atlanta to New York?

What are the best sights and things to do in New York?

Once in New York, you can start exploring the city and discover its surroundings. The top sights and things to do are Metropolitan Museum of Art, Empire State Building, Museum of Modern Art (MoMA), Bronx Zoo, Central Park.

Traveling by bus to NYC

Useful information for your bus trip

‏‏‎What are the boarding requirements?

Bus companies recommend arriving 30 minutes before the departure time. Prepare your paper ticket or obtain it directly at the station (Will Call ticket) for your bus from Atlanta to New York and a valid photo ID.

How much luggage can I take on the bus?

Each bus company has its own luggage policy. As a general guideline, for your bus trip between Atlanta and New York, you are allowed one carry-on bag and one luggage. your luggage should not weight more than 23 kg (50 lbs) and your carry-on should fit in the overheard compartment of the bus.

Is the bus environmentally-friendly?

🍃On average, the bus generates 76% less CO2 emissions in the atmosphere than traveling the same distance between Atlanta and NYC by car (about 870 miles).

‏‏‎Is the bus cheaper than the car for a trip between Atlanta and New York City?

🚌 The bus is 30% cheaper than the car for a trip between Atlanta and New York. You can find bus tickets starting as low as $44.

Things to do in New York City 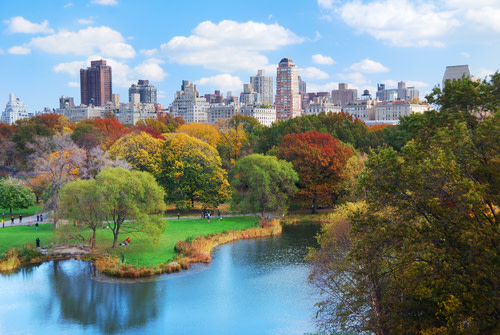 Will you be returning to Atlanta by bus?

If you are looking for the return bus journey, check out buses from New York to Atlanta.

Busbud.com makes it easy for you to find, compare and book city-to-city bus tickets, all over the world. We save you the extra trip to the bus station. With Busbud, wherever you go, you have a worldwide bus station within reach and available in your own language and currency. Busbud prides itself on its worldwide partnerships. We make it possible for you to buy tickets with its large network of trustworthy bus partners like Greyhound, Eurolines, ALSA, OUIBUS (BlaBlaBus), National Express and many others.