Book Tufesa Bus Tickets for your next trip

Find and book the cheapest Tufesa bus tickets online with Busbud. Thanks to our large inventory and using our sorting and filtering features, you'll be able to find the best Tufesa fares easily.

View different Tufesa bus schedules and Tufesa ticket prices to find a bus based on your traveling needs.

Find out which amenities will be accessible on a Tufesa bus for each individual departure when you book your Tufesa tickets, such as WiFi, A/C, power outlets and more.

With our coverage of all available Tufesa bus lines, we make sure you are able to get to where you need to be.

Be sure to keep an eye out for a coupon code to benefit from Tufesa discounts and cheap bus tickets.

On Busbud, you'll be able to find useful information such as Tufesa contact details in case you need to get in touch with them.

Busbud is proud to partner with Tufesa and to offer Tufesa services to travelers all over the world. 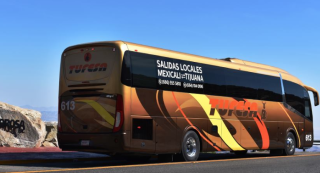 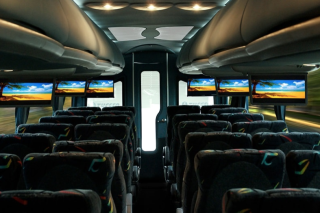 User reviews from travelers who booked their tickets with Tufesa

Overall I was impressed with kindness the bus driver and staff expressed. They were all genuine and considerate, including the other patrons taking the bus and at the stations; however, it was a bit of an inconvenience that the bus was expected to arrive 2hrs late and because of this, the drop off destination changed. I don’t think I’d use this transportation again, unless I had no other options.
Bakersfield to San Jose

June 30, 2022
Overall I was satisfied with the service and trip. The outlet store for service was confusing but anything a first time rider could get confused by.
San Jose to Fresno

April 19, 2022
I paid for a ticket route las vegas to los angeles and on the printed ticket it had an address 99 S MLK which is north Vegas. I get there 30 minutes prior to departure. Waited till 15 minutes after its scheduled departure. Called the company and they responded that they no longer pick up there as of Dec 2021. My ride was for apr 8 2022. Please guys pay extra and avoid this line of transportation.
Las Vegas to Los Angeles

April 10, 2022
Ride was comfortable but a passenger had a gun. Didn't know until he got off was tucked in the back. He leaned over and seen it his black Levi jacket was hiding it.
Phoenix to Las Vegas

February 20, 2022
No notification via text or email stating the bus was going to be an hour late. This set me back an hour and since the bus does not stop at the airport I would have missed my flight. I ended up having to drive and parking my truck at the airport which was the whole point of getting a bus so I didn’t have to do that. Had I had at the very least an hour heads up I could have made better arrangements.
Tucson to Phoenix

January 6, 2022
My paperwork told me i was getting dropped of in city I live in. Which it didn't. I was dropping of more the 12 miles away. Totally a different city. My ride was supposed to be 3 hours, which turned out more the 6 hours. The tv sound didn't work. And the bus was cold and only using the heater for 9 mins. That's a long 6+ hours being cold.
Las Vegas to Colton

December 27, 2021
This is a bus service that should take service out of the name. Bad communication time after time late why not let passengers know when the the bus originating is late from your departure station a simple text or email that yeh bus is late not if it’s 30 minutes or less late but more than 30 minutes how hard would that be ? Never on time a poor excuse for a service company - spend the extra money and go greyhound.
Phoenix to Indio

September 2, 2021
I was very disappointed with the condition the bathroom was in. The WiFi did not work. My bus was scheduled to leave at 2pm but did not do so until after 4:15pm.
Bakersfield to San Jose

July 17, 2021
I purchased a ticket online from Bakersfield to Phoenix May 26 at 11:45 and when I arrived the bus had already left I asked the person that was working and said it had left an hour early I was so disappointed I couldn’t get to Phoenix that day it’s my first time wanting to travel in a bus and I took tufesa becuade
Bakersfield to Phoenix

May 27, 2021
i paid for a ticket to colton and was dropped off bloomington, an additional 7 miles from where i paid to be dropped off. i got no warning of this and the driver was totally unconcerned. i had to walk 2 miles and then paid $20 for a taxi to get me to colton. thanks for nothing
Indio to Colton

May 21, 2021
Great staff but the huge delay on 15 going to Vegas on may 14 was terrible. Not your fault but several almost threw up from driver’s driving stop and go for over an hour. Bus needs a lower gear. Also don’t run a movie all the time when most are trying to sleep! Yes we can turn down our own speaker but many were on and no one was watching
Ontario to Las Vegas

May 5, 2021
the bus stopped for smoke coming from the engine the bus got underway but we had to ride all the way to phoenix with no Air conditioning- not good it was very hot in the cabin
Indio to Phoenix

April 12, 2021
the price and cleanliness pf the bus was very good. aside from a late start the ride was relaxing and I felt safe the whole time. Great deal pricing.
Indio to Phoenix

February 22, 2021
Great service. The only bus that was going to Phoenix from Las Vegas in 5 hours 😁 Keep up the great service!
Las Vegas to Phoenix

January 25, 2021
Bus driver was very nice. But the bus was late by 3 hours. Customer center staff were unhelpful
Indio to Ontario

December 13, 2020
They were very nice and got me to Vegas faster that expected ! Overall super comfortable ride, definitely taking this bus again
Phoenix to Las Vegas

December 9, 2020
Very comfortable ride and faster than any other bus company and for a better price as well.
Las Vegas to Phoenix

September 2, 2020
Great customer service! Fast and smooth ride the driver was polite and amazing Will use again
Phoenix to Nogales

February 28, 2020
Excellent service, very clean and comfortable bus. Excellent driver. Only downfall was the sound from the videos that played the whole trip. If they could turn off the sound throughout the bus and people could just plug into the armrests with their head phones, that would’ve made it so much more relaxing.
Las Vegas to Phoenix

February 4, 2020
He did not make any stop at all to get something to eat or it didn't have any Wi-Fi other then that it was good.
Huntington Park to Las Vegas

February 2, 2020
Ontario station, they don’t have right information to get there, there no reference to get there, anyone can get lost to find the location
Ontario to Las Vegas

January 27, 2020
Would be nice if they would ensure there was plenty of TP in the restroom before going on a long trip. I was shocked we left without replenishing the TP dispenser. Mentioned it out loud and in front of the person taking care of the bus bathroom and was disappointed to see it was never done. Last, would be nice to clean bathrooms before departure.
Phoenix to Ontario

January 23, 2020
Convenient and affordable option for travel. There were only 28 on board but the noise level was deplorable. Passenger directly in front of me played the entire 'Endgame' video at full volume. Passengers spoke on cell phones and all could hear their conversations. There should be a policy on noise level so passengers who want to relax, sleep, read, etc. are able to travel in peace and quite.
Phoenix to Ontario

January 3, 2020
Bus was neat. Started on time reached early. Finding the bus station was a bit confusing but overall it was a good experience
San Jose to Fresno

December 30, 2019
Even though they were late I didn’t mind, it was such a comfy ride I honestly can’t complain! It was a very smooth trip I definitely recommend this bus. Also since I didn’t speak Spanish a worker helped me with what I needed I was very grateful:)
Phoenix to Las Vegas

December 11, 2019
I went to the stop and a very rude lady told me that I have to print my ticket.. I was looking all around to print the ticket. That was very frustrating especially because this was my first time in Ontario. Also the bus driver stop to eat at a Mexican restaurant for 40 min. What a waste of time.. also the was taking on the cell phone saying bad words. Horrible experience
Ontario to Phoenix

December 4, 2019
It was a safe and uneventful ride, Break stop was a bit crowded, but was a whole lot better than beating on the dog.
Phoenix to Ontario

November 30, 2019
Even though the bus ran late they were efficient, fast and friendly when the bus arrived. We were on the road quickly.
Phoenix to Las Vegas

Busbud is a bus search tool - we include Tufesa routes, schedules and prices in our searches along with many other bus companies. You can compare prices, amenities and times by searching for a route. If you find a suitable trip, you can go ahead and get your Tufesa ticket from us. Note that buses sell out, Tufesa and other operators generally charge a lot more for last minute tickets or for tickets bought in person.