What are the most popular bus routes to San Diego?

We've found the top bus routes travellers take to get to San Diego! Every day our bus partners (Greyhound, Amtrak, Tufesa) bring people from major cities to San Diego. Enjoy the convenience of taking the bus to San Diego!

Buses from San Diego to San Jose for $80

When you book a bus trip from San Diego to San Jose with Busbud, you pay an average price of $80. There are 4 scheduled buses per day. The bus trip takes an average of 13h 25m. Departures are between 5:30 AM and 9:25 PM.

Buses from San Diego to Anaheim for $22

Each day 4 buses connect San Diego to Anaheim. The average travel time for this route is 2h 15m. When you book with Busbud, you can expect an average price of $22. Daily departures are between 5:45 AM and 8:05 PM.

Buses from San Diego to Tucson for $75

You can take the bus from San Diego to Tucson for an average price of $75. There are 4 buses operating this route every day. The earliest bus leaves at 7:00 AM and the latest bus departs at 8:05 PM. The average travel time for this route is 14h 15m.

Buses from San Diego to Long Beach for $22

Within the city there's San Diego Greyhound Station, which is slightly southeast of the city's downtown area on National Avenue. It's near Petco Park and tons of great places to eat. Go to a pub for a tasty pint of beer, or try out some of the ethnic food in the area so you're ready to explore the rest of the city.

The other intercity bus station in the area is in San Ysidro, which is very close to the Mexican border. It's also near some premium outlet stores where you can score deals on brands such as Nike and The North Face.

Ready to see all that San Diego has to offer?

Ready to get a taste of the Southern California lifestyle? San Diego is definitely worth a visit. With its gorgeous beaches, amazing attractions, and relaxed vibe, this city is a prime vacation destination whether you want to explore it for a day, a week, or a month. One of the best ways to get to San Diego is by bus. 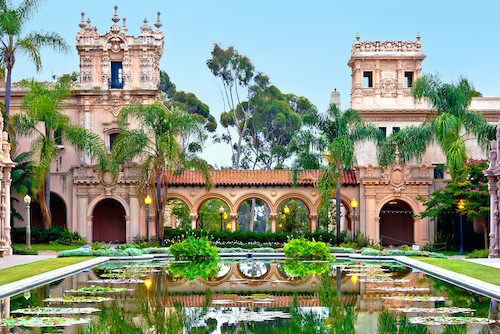 Things to Do in San Diego

Balboa Park is the go-to destination for tourists in San Diego. This 1,200-acre park has something for everyone, and it would be easy to spend several days exploring all that it has to offer. Attractions in the park include the Balboa Park Carousel, which was built in 1910 and is absolutely gorgeous; the Balboa Park Miniature Railroad, which can take you on a short and amusing journey through a few acres of the park; and Sefton Plaza, which features beautiful bronze statues.

Balboa Park's most outstanding feature is the famous San Diego Zoo, which is one of the world's most well-known animal parks. It is also one of only four zoos in the United States that is home to giant pandas. Altogether, more than 4,000 animals of over 800 species inhabit the zoo.

San Diego has offerings beyond Balboa Park. Be sure to check out SeaWorld San Diego, where you can catch an exciting marine animal show.

The USS Midway Museum is a thrilling way to look into the country's history. Go to Petco Park to see a professional baseball game.

San Diego is full of sunshine, great food, and awesome things to do. Instead of battling traffic in your own car, why not take the bus to get there?

Where are the popular bus stations and stops in San Diego?

Busbud makes bus travel easy. We help travelers find a bus, plot routes, and book intercity bus tickets all over the world. Use Busbud to book your trip online, in your own language and currency, wherever you are. Busbud partners with safe and reliable bus companies throughout the world such as Greyhound, Eurolines, ALSA, OUIBUS (BlaBlaBus), National Express and many others so you can buy tickets without a worry.

Popular bus routes to and from San Diego