Book Intercity Xpress Bus Tickets for your next trip

Be sure to keep an eye out for a coupon code to benefit from Intercity Xpress discounts and cheap bus tickets. 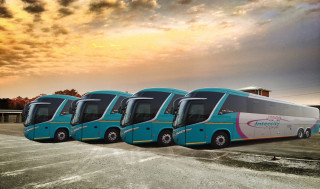 User reviews from travelers who booked their tickets with Intercity Xpress

2 May 2022
We were given eagle express without being informed,got at park station and there was no bus to leave.Not good at all as we’re not certain when the bus will leave
Midrand to Bloemhof

1 May 2022
The company is unprofessional and disrespectful. They do not care about their commuters and risked our lives by allowing a nonroadworthy bus take us which it never reaches its destination it broke down in the middle of a dangerous road and the drivers were speeding knowing very well the breakes were also just been fixed. I hate this company and wish it should be closed. I have never felt so abused in my love. The bus arrived after 7hours and died in the middle of the road 5hrs post the arrival time.
Bloemfontein to Grahamstown

1 May 2022
What a horrible experience, having to wait 2 and half hours for a bus and then when it finally came certain people were given preference to enter the bus first. I will never use this bus ever again and will make it known to other people not to. We waited up until our cellphones batteries were dead only to find that the bus doesn't have the charging plugs
Johannesburg to Kimberley

1 May 2022
It was a first worst experience, I don't think I will travel with that bus ever again.
Port Elizabeth to Johannesburg

27 April 2022
The service is satisfactory but at Matatiele the driver must never again drop passengers in an open space next to KFC. Dropping them at the garage is better for their safety.
Midrand to Matatiele

25 April 2022
I'll never book Intercity anymore .. what is Kalamazoo .. really now .. please read my previous comment. We are really struggle since Greyhound left .. the lack of customer service and professionalism is disappointing.
Johannesburg to Durban

21 April 2022
They should start at Park Station and separate the East Rand passengers from Pretoria one.
Pietermaritzburg to Pretoria

21 April 2022
Dreadful, indifferent staff, late arrival and no means to track or communicate with anyone in Intercity
Pretoria to Hopetown

19 April 2022
They don’t keep time at all..the bus was one hour late from park station, the 20mins rest was 30mins & wen we arrived at Kimberley we took another 10min unnecessary rest at ultra city us being already 2hrs late. The charging ports don’t work..the hygiene was at its lowest.
Johannesburg to Kimberley

18 April 2022
Well organized. I am pleased. Only if they can inform travellers when they experience delays in departure times to avoid panic attacks of travelers
Johannesburg to Fort Beaufort

14 April 2022
Intercity xpres was a very bad choice they did private trips in jhb never made it to Pretoria..left all Pretoria people at park stations
Scottburgh to Pretoria

14 April 2022
I was 1 minute late, the staff called me alerting me of the bus arriving. I was so happy to get the call as I was just around the corner
Durban to Scottburgh

8 April 2022
The bus broke down at Kokstad, had to wait for a bus from Durban, which arrived about 5hrs later. Worst service ever.
Matatiele to Johannesburg

5 April 2022
The bus broke down between Cedarville and Kokstad. The driver drove till we reach Kokstad and waited for 5 hours to get a bus from Durban. No coffee or refreshments to make a stay comfortable
Matatiele to Pretoria

4 April 2022
I booked three tickets for my sister and my 2 kids, 8years and 10 years, my sister and my 8 year old girl were left behind by the bus at Montrose shell ultra city. When I called the call center a very rude and unprofessional lady answered the call, she asked what were they doing for over 20min to be left behind she then said they have to organize their own transport to get to PMB, as I was trying to level with her, she hung up on me. 2 females were left behind by their mode of transport and were forced to fend for themselves in a country as dangerous as SA, with the level of abuse bieng faced by women and children in this country I am appalled by this level of unprofessionalism and evident prejudice as a result I demand a redress.
Benoni to Pietermaritzburg

3 April 2022
My bus was scheduled to leave Durban at 9.30 however we left at 10.15. We reached PMB at before 12pm. And only left PMB around 3am. We changed buses. The driver was so caring and received less to no assistance from the company. But he still spoke to us and said he is doing his best. This delay caused many ppl to leave the bus and also miss their flights to other places. My 8 year old was feeling very uncomfortable and sick due to this. It was our first time on the bus and to experience this was so horrible.
Durban to Benoni

30 March 2022
The driver took made very long stops, in Midrand we stopped for almost 40 minutes while he was waiting for people to come and collect parcels
Durban to Pretoria

26 March 2022
The bus was 1 hour late fro. Jhb and another reason for delay ..that's was an accident on the road..in Kimberley..reason for late arrival I Cape Town Bellville.
Johannesburg to Cape Town

24 March 2022
Joburgh traffic is hectic, but being late for an hour is unacceptable and 20min brake is not even kept...we take 40min or more to leave Montrose
Midrand to Scottburgh

24 March 2022
The bus was late and the personnel was not helpful at all when we got to the Big Bird bus terminal, the second thing was that we were just dropped off just outside Park Station and told that the bus we came with from Midrand was only for Cape Town passengers only. I feel our safety was compromised and the drivers seemed to have no concerned of our well-being
Kimberley to Pretoria

23 March 2022
The bus was more than two hours late from Park Station. Furthermore the bus broke down in Kokstad.
Midrand to Matatiele

22 March 2022
Maintenance on busses is important and checks before they work, a breakdown for more than 2 hours waiting for another bus while still in the same area is unacceptable
Scottburgh to Johannesburg

Busbud is a bus search tool - we include Intercity Xpress routes, schedules and prices in our searches along with many other bus companies. You can compare prices, amenities and times by searching for a route. If you find a suitable trip, you can go ahead and get your Intercity Xpress ticket from us. Note that buses sell out, Intercity Xpress and other operators generally charge a lot more for last minute tickets or for tickets bought in person.