Travel with Greyhound Bus and Busbud

Greyhound Lines Inc is owned by FirstGroup and operates as Greyhound in the United States, Greyhound Canada in Canada and Greyhound de México in Mexico. With a long history in North America linking to Mexican and Canadian routes, Greyhound serves over 3800 locations across the territory.

With over 1,700 buses and 18 million passengers each year, Greyhound is the leader in city-to-city bus travel in the United States and Canada. Greyhound is part of a network of bus companies (as well as Amtrak) which sell tickets on each other’s routes to allow connections to even more locations, including rural routes through Greyhound Connect. All their buses include toilets, free WiFi, and reclinable seats.

Busbud has been an authorized seller of Greyhound bus tickets since 2014. You can easily find the fastest, cheapest, and best-rated Greyhound bus departures on Busbud - at no additional cost! 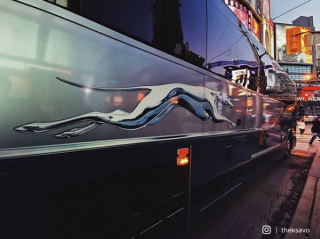 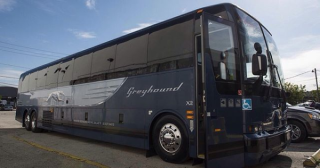 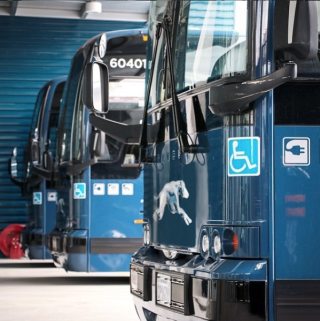 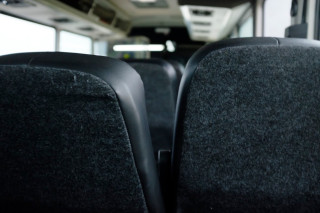 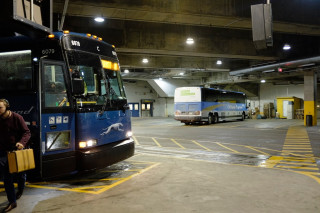 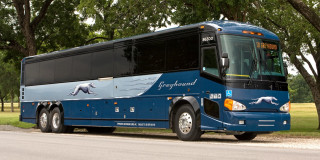 User reviews from travelers who booked their tickets with Greyhound

There was and 1-2 hour delay that caused problems for me. I’m very dissapointeed that I paid for a ride only to get there an hour late and miss some important things
Minneapolis to Madison

June 23, 2022
The third driver we had was rude when we started out screaming and cussing at a rider to see his ticket and we all had reboard tickets all because his miscount
Chicago to Denver

June 22, 2022
There was a mechanical problem so we had to exchange bus at Hollywood FL waited for about an hour
Miami to Vero Beach

June 22, 2022
Cancelled first bus out of 5 layovers. 2 delays, and I'm still on the road 2 days later
Knoxville to Concord

June 21, 2022
The bus showed up 80 minutes late, making me miss my transfer in Orlando. There wasn’t another bus to take me so I was left stranded in Gainesville.
Gainesville to St. Petersburg

June 19, 2022
Sorry I will probably never use Greyhound again. The constant 10 minute updates lasted for over two hours while trying to wait in line so many unsanitary areas. I thought it would be a great ideal instead of renting a car and driving to Anderson because I had flown all night from Seattle what a bad choice. The last time I rode Greyhound was back in the 1980’s and it was great what happened?
Atlanta to Anderson

June 17, 2022
Probably wouldn’t take their services again if I had the option, but lack of professionalism and cleanliness
Charlotte to Atlanta

June 16, 2022
The electric plugs did not work. The seat of my chair was lose making it less comfortable than it might have been otherwise.
New York to Saratoga Springs

June 15, 2022
Driver and employees were kind and helpful. Unfortunately I waited too long for my bus to arrive in Dallas.
Dallas to Waco

June 15, 2022
The seat that I sat in was a little rocky but other than that it was a good ride.
Atlantic City to New York

June 13, 2022
I was delayed over 4 hours for a layover that should have been for just an hour. No reasonable explanation was given and the staff didn’t seem to be able to do much about it. I ended up missing my connection to Dallas and had to sleep at the greyhound station overnight to wait over 5 hours for another bus in the morning. This is the worst business I’ve ever come across in America. Greyhound doesn’t deserve to be in operations
Washington to Dallas

June 13, 2022
I was forced to sleep on cold metal hairs at the station! bus was supposed to leave at 10.05. it was moved to 10.50 and eventually cancelled at 11.45 pm. I had no option but to sleep at the station. no apology no explanation. just an announcement that the trip has been cancelled. in the morning , I was told the next available bus at 7am was full. I was to wait for the 8.30 bus to Detriot which is longer with more transits. this is my worst trip.
Chicago to Detroit

June 12, 2022
The bus was like 4hrs late , then when it finally got there it had trouble starting then we had to wait for someone to come check to see why it wasn't starting it took about 15mins for the person to get there. I was to be in Ny a little after 12 noon give or take , I never got to Ny until after 6pm I missed my ride then I had to get 3 trains to get home making me even later . Long story short together I missed most of my uncle memorial service which was the reason I was traveling for in the first place .
Washington to New York

June 12, 2022
This was my first time traveling by greyhound and my only complaint would be the seating. The is not enough leg room for tall people. I'm only 5'8 and was uncomfortable so i can image taller people do not enjoy the ride either.
Boston to Newark

June 12, 2022
Awesome staff, could use some more cleanliness on the bus floors. Overall would take another bus ride again.
Milwaukee to Chicago

June 9, 2022
Great service but Orland bus should depart an hour earlier say at 3 am to reach airport earlier
Orlando to Miami

June 7, 2022
Bus was cancelled without any warning. Had to find out from people in line. Had to rebook a ticket, and by the time I did, I could only leave the next day.
New York to Boston

June 6, 2022
I was waiting on the bus. But there was a confused with the driver. I never told me that I have to take the bus to transfer. I never arrived to my destination
Reno to Las Vegas

June 6, 2022
It was overall nice just very long trip butt gutted and staff were a lil bit aggressive but they were professional and they all did their jobs
Columbus to Atlanta

June 4, 2022
I’m still on the road and will get to my destination tomorrow even tho I was going to get there today at 2pm
Denton to Akron

June 3, 2022
The staff at the Greyhound station in Miami was very rude and inappropriate towards me. I was making sure that was directed to right times and what bus I was supposed to go on. When I asked for help they were caress and didnt want to assist me.
Miami to Memphis

June 3, 2022
I would only recommend bus service in USA if no other transport option available or needing g cheapest option
Nashville to Knoxville

June 3, 2022
Haven't ridden bus in years, but it was economical, no fuss, can eat on bus, relax & enjoy scenary - enjoyed it, good job!!
Tallahassee to Orlando

May 31, 2022
I was heading to laredo then they dropped us off from Dallas in San Antonio saying my rescheduled bus departures in 8 hours. We got our tickets at 5:34 am and the bus was going to leave at 1:40 pm. We were meant to arrive at laredo at 10 am. We were left wandering in San Antonio which wasn't the worst place ever but we should have never been left there from the start. They left the whole bus there since the second driver meant to finish the rest of the trip didn't arrive at all. We were walking around until we called in some family to give us a ride ( the family we were going to visit in laredo) at 5 am they picked us up at around 10 - 11 am. We got home in a car around 1:30 pm we got there even before the bus would of even left the San Antonio central. The whole bus ride was pretty smooth and clean, but them stranding us there just ruined and killed the whole experience.
Dallas to Nuevo Laredo

May 30, 2022
I wasn't please with my ride. Not only did a lady cut herself and bled all over the bus, we had to turn around back to the bus terminal. Where we had to reschedule for a different day. It was so inconvenient.
Phoenix to Flagstaff

May 29, 2022
Poor communication with some of the drivers. On the stop at Albuquerque NM the driver was late by 4 hours ..
Chicago to Phoenix

May 28, 2022
Staff was friendly and the bus was ok, but it was very very late, departing and even more, arriving
Chicago to Indianapolis

May 28, 2022
I lost my luggage in the bus. It has been a week since i made a claim on it but still not a single response. I had my important medications that I got in my country and i cant find here. Please help me to find my luggage.
New York to Virginia Beach

May 27, 2022
Hard TO undestand what staff speaks at the counter and Even the driver. Some passegers unpolite people
Miami to Lake City

Does Greyhound have WiFi on board?

Yes, WiFi is available on all Greyhound buses and is free!

Can I exchange my Greyhound bus ticket?

Yes! You can exchange your ticket directly at the station before your original departure time. You can only change the date and time, but not the itinerary or name on the ticket.

Does Greyhound allow pets on board?

Can I bring over-sized luggage (bicycle, sports equipment) with me on Greyhound buses?

Yes you can! As long as there is room under the bus, oversized luggage is allowed on Adirondack Trailways buses for an extra fee. The fee varies depending on the size of your luggage and will be paid directly at the bus station upon checking in the bus.

Do I need to print my Greyhound bus ticket?

Yes, you need to print the ticket at home and bring it to the station on the day you travel. Alternatively, you have the Pick up at the Station option. For this, you must go to the Greyhound counter before your departure time and pick up your ticket.

How many bags can I take on Greyhound buses?

Does Greyhound have a toilet on board?

Yes, there is a toilet on all Greyhound buses. The toilet is generally located at the back of the bus or near the middle door. Most bus toilets do not have running water, so we recommend bringing hand sanitizer with you.

Can children travel unaccompanied by adults on a Greyhound bus?

Children under the age of 12 cannot travel on a Greyhound bus unless accompanied by someone 17 years of age or older. Children between the ages of 12-16 that travel unaccompanied must have a completed Unaccompanied Child Form and pay the full fare.

Busbud is a bus search tool - we include Greyhound routes, schedules and prices in our searches along with many other bus companies. You can compare prices, amenities and times by searching for a route. If you find a suitable trip, you can go ahead and get your Greyhound ticket from us. Note that buses sell out, Greyhound and other operators generally charge a lot more for last minute tickets or for tickets bought in person.