The Union Station Los Angeles, originally knowned as Los Angeles Union Passenger Terminal (LAUPT), is a historic train and bus station in the heart of Los Angeles. The station offers Amtrak rail, Metrolink commuter rail services and Greyhound buses and is well connected to LA's main spots. The Station also houses a number of shops, restaurants and even an art gallery, making it a popular destination for both locals and visitors alike.

It's centrally located, and it serves as a transportation center as well as being close to everything downtown. The station is home to a number of restaurants, shops, and businesses, as well as an Amtrak station and a Metro subway station. Visitors can also take a tour of the station or explore the surrounding neighborhood.

Union Station Los Angeles is one of the main stations on the west coast. It is accessible by Amtrak, Metro, and Metrolink, while also being a hub for buses, with companies like Greyhound operating from there. 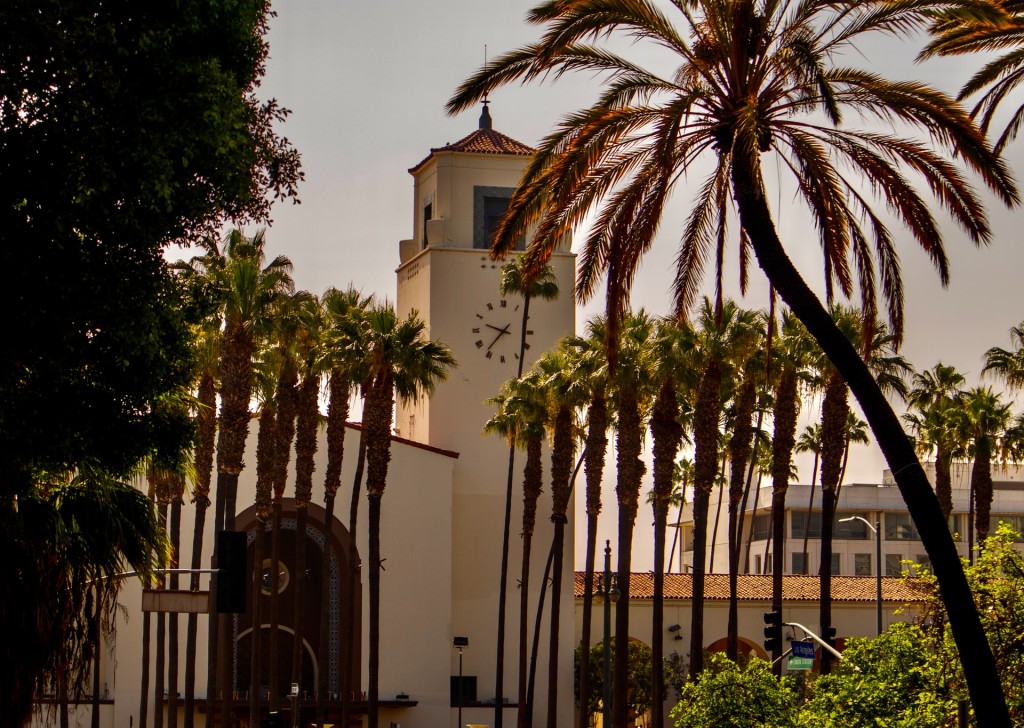 A sight to see

Besides being an important point of access to the LA, the station is also a sight worth seeing for its design. It is one of the last great train stations built in the United States, and it is considered to be one of the finest examples of art deco architecture in the country.

Designed by noted architects John and Donald Parkinson and completed in 1939, the station was built to consolidate different train services that were operating in the city at the time, and it served as a major transportation hub for many years.

Over the years, the station has developed into a destination for art exhibits, live music, and fine dining. Today, the place is a popular tourist destination and also a major transportation hub for the region.

LA Union Station and the Oscars

Looking for a star location to hold the most important awards in the film industry during the pandemic, producers for the 2021 Oscars found the perfect place at Union Station Los Angeles. The station has been used as a filming location for over 300 films and television shows and is built into Hollywood's golden era.

The beautiful building and grounds have been used in many feature films over the years. A few notable examples are Blade Runner (1982), Pearl Harbor (2001) Catch Me If You Can, and The Dark Knight Rises (2012).

For the 2021 ceremony, the historic building was transformed to receive celebrities and movie-industry executives who encountered a beautiful, intimate space within the Los Angeles Landmark. The event marked the first time in history that the Oscars were outside the Dolby Theater.

Where is LA Union Station?

The station is located at 800 N Alameda St, Los Angeles, CA 90012, close to many city landmarks, including Olvera Street, Chinatown, and Little Tokyo. There are also several Metro Rail and Metrolink stations nearby, making it easy to get around the city. The station is also served by several bus lines, making it a convenient transportation hub for visitors and locals alike.

How to get to Union Station LA

A great variety of bus lines also have stops near the station, making it easy to get to and from Union Station. Another option is to take a taxi or an Uber to Union Station. It is about a 10-15 minute ride from downtown Los Angeles, depending on traffic.

Different companies operate from Union Station LA, as it works as a hub both for public transportation within the city and regional and national trains and buses.

Most intercity trains operating at Union Station LA are supplied by Amtrak California. The station is served by the Pacific Surfliner, which runs from San Luis Obispo to San Diego, and the Coast Starlight, which runs from Seattle to Los Angeles. Amtrak also offers connecting bus services to other destinations in California.

Restaurants at the Union Station LA

If you're looking for a place to have a meal before getting on your train or bus, Union Station Los Angeles has several great options to choose from. Here are a few favorites:

Other services at LA station

There are lockers available for left luggage, which can be rented for a daily fee. Amtrak customers can store a bag for $10 per day, but travelers from other companies usually have to pay double. A more affordable option is to head just outside the station, where another company provides the left luggage service at better prices.

The station also has a lost and found, where you can claim any items that may have been lost during your travels.

Union Station Los Angeles is a safe and secure place to travel through. The station is patrolled by security guards, and there are also police officers present. There are also several security cameras throughout the station. If you have any concerns or problems, don't hesitate to ask one of the uniformed staff members for help.

What to see near Union Station in Los Angeles

Union Station Los Angeles is located in the downtown area of the city. There are many great things to see and do nearby, including:

*this departure is leaving tomorrow

If you're on a tight budget or simply want to find the best travel deals, you will find bus tickets as low as $1 for bus trips leaving today from Los Angeles Union Station.

What other bus stations are close to Union Station in Los Angeles?

Busbud helps you easily search, compare and book intercity bus tickets on a worldwide scale with our comprehensive list of bus routes and schedules. With Busbud, wherever you go, you have a worldwide bus station within reach and available in your own language and currency. Busbud partners with safe and reliable bus companies throughout the world such as Greyhound, Eurolines, ALSA, OUIBUS (BlaBlaBus), National Express and many others so you can buy tickets without a worry.

Other popular destinations from Los Angeles