Find the cheapest bus tickets from Quebec City to Montreal

Our world-class team of experts is always here to help.

November 11, 2022
The bus ran on the promised schedule and the driver and attendant were very friendly and courteous. I would recommend Orleans Express to anyone traveling between Quebec City and Montreal.
Orléans Express

October 10, 2022
Seating was a little cramped as bus was almost full. As it’s considered mid length travelling, perhaps the number of seats can be reduced for greater comfort
Orléans Express

October 9, 2022
I am someone that could not understand French. The driver was making an announcement in French only. Much more, the bus in Quebec supposed to park in Porte 4 but arrived in Porte 5. The driver arrived 5 minutes before departure time and driving fast in the rain
Orléans Express

September 14, 2022
The driver stopped the bus in the middle of now where in the pouring rain because the windshield wipers were squeaking. He had no tools on board so we had to wait for over an hour for a mechanic. The driver did not communicate with the passengers so we were literally left in the dark to figure out what was going on. As a result we were almost 2 hours late arriving in Montreal.
Orléans Express

July 19, 2022
Top notch but work on night trips schedules. For majority of us who want to gain hours travelling between cities taking night rides especially during summer.
Orléans Express

March 24, 2022
The lady at the reception was not helpful when asked where the bus leave. She answered “I don’t know” ask the people on the line …
Orléans Express

February 23, 2022
The stuff was super friendly and even though it was snowing the whole day the bus was perfectly on time.
Orléans Express

January 1, 2020
Good trip. But I forgot my therm bottle (Black - Contigo brand) inside the bus. Unfortunately, nobody found it.
Orléans Express

October 8, 2019
Good clean bus that was comfortable. Staff not terribly friendly but that may just be the Quebec way.
Orléans Express

October 4, 2019
An easy, economical way to travel from Quebec to Montreal. Lovely to see the scenery out of the big windows. Comfortable seats and free wifi. Would recommend this way to travel!
Orléans Express

September 19, 2019
I was glad that this time I have plenty of space, a table to put my laptop on and a plug to charge my laptop.
Orléans Express

September 16, 2019
Very nice. Being late was due to an accident or construction on the highway. Not drivers fault.
Orléans Express

September 11, 2019
We boarded the bus and 5 minutes later had to switch buses. All of our luggage was also switched. Staff were not overly friendly (the bus driver or the man at the counter whom I talked to). Bus seats were not comfortable (head rests too far back and couldn't sleep).
Orléans Express

August 31, 2019
The seats were super comfortable, there was wifi & outlets, the bus driver kept the temperature pleasant, and the bus was nice, quiet, and clean. Overall a very enjoyable ride.
Orléans Express

July 22, 2019
Fantastic ride. Wish Wi-Fi was unlimited and staff had told me to go to ticket office to see if I could change for an earlier bus!
Orléans Express

June 8, 2019
The bus was an hour late to arrive Montreal, and I didn’t speak French so I had no idea what happened
Orléans Express

June 7, 2019
Very easy and convenient service, allowing e-tickets on your phone (like in Apple wallet), making the check-in smooth and no need to come to the station early!
Orléans Express

April 23, 2019
I did not have internet connection and expected an annouce by the driver to explain this. It never happenned and only after 20-30 minutes on the bus I saw a notice saying giving he internet connection. I also had a very annoying, hyperactive kid sitting beside me and making all kinds of noise and banging the table at the back of the seat. Perhaps seats for people with kids should be reserved at the front of the bus.
Orléans Express

April 8, 2019
The bus driver was super helpful and understanding especially since it was my first time taking a bus from Quebec to Montreal! He got me where I needed to go and helped me from the start to end!
Orléans Express

February 25, 2019
Great services online and at the station. The buses are great and so is the service.
Orléans Express

February 18, 2019
Orleans bus was great. Clean, comfortable. The driver was pleasant and explained everything to us over the PA. He was a great driver and got us to Montreal on time even though the weather conditions were terrible.
Orléans Express

February 16, 2019
Great way to get from Québec City to Montreal. Regular departures made it easy to select a time suitable for our travels. The comfortable seats made for a pleasant journey. Would recommend to other travellers
Orléans Express

December 29, 2018
The seats were a little uncomfortable and the air was stuffy. But it was a good trip overall.
Orléans Express

Bus companies on this route

The best way to get from Quebec City to Montreal

There are two options to get from Quebec city to Montreal, by bus or by train. However, the most affordable way to get there is taking the bus.

How to get from Quebec City to Montreal?

If you're looking to travel to Montreal from Quebec, there are a few different options.

The distance between Quebec City and Montreal is about 255 kilometers, and takes approximately 3h15 mins.

The best time to buy tickets

It's always best to purchase your tickets well in advance, but the best time to buy bus tickets is about 30 days prior to your travel date.

What bus brings you from Quebec City to Montreal?

Orléans Express was founded in 1990, and became a part of Keolis Canada, a division of the Keolis Group in 2002. They have a network extending from Montréal to Gaspé, by way of Trois-Rivières, Québec City, the Bas-Saint-Laurent ans the Centre-du-Québec region.

Via Rail is a Canadian Crown corporation, founded in 1977. It operates intercity passenger rail service in Canada.

Via Rail operates over 500 trains per week across eight Canadian provinces and 12,500 kilometres of track, 97 per cent of which is owned and maintained by other railway companies, mostly by Canadian National Railway (CN).

Booking your tickets on Busbud is easy and convenient to search and compare prices. You can also easily manage your booking or book more trips using the Busbud app from the App Store or the Google Play store.

How to find the best deals on bus tickets

If you're planning to travel for the Holidays, make sure to get your tickets in advance to take advantage of the lowest prices. If your dates are flexible, try to avoid peak hours such as weekends, opt for early weekday morning departures or evenings.

Amenities offered for each bus or train operator

What to expect on the trip

Depending on the route you selected, the scenery you'll see will vary. You'll either pass through downtown Montreal, go through Laval, or the West Island. Both cities have lots of history, and an old Europe feel.

Bus service from Quebec City to Montreal is covered by Orléans Express.

Where are the popular bus stations and stops in Quebec City and Montreal?

How much does a bus ticket from Quebec City to Montreal cost?

How long is the bus ride from Quebec City to Montreal?

The average travel time between Quebec City and Montreal is around 3h 15m, although the fastest bus will take about 2h 25m.This is the time it takes to travel the 234 km that separates the two cities.

How many daily bus connections are there between Quebec City and Montreal?

Which bus companies travel from Quebec City to Montreal?

What are the departure and arrival stations when taking the bus from Quebec City to Montreal?

The average bus ticket from Quebec City to Montreal costs around CA$55 for departures 30 days prior.

To save money and be sure you have the best seat, it's a good idea to buy your bus tickets from Quebec City to Montreal, as early as possible. The best time to find and book cheap bus tickets is to book at least 30 days in advance.

If we look at the other days, booking between 30 days and 60 days before the departure will allow you to save CA$20.

Choosing the bus instead of taking the car or a plane

Taking the bus to Montreal instead of other modes of transportation is not only the most economic way to travel, but it's also the best option for the environment.

What to see in Quebec City

There's so much charm in this city, and lots of history. A must do is to stroll through Old Quebec and visit Le Chateau Frontenac, Petit-Champlain, and the Plains of Abraham. Another site to see is Montmorency Falls, a waterfall that’s 30 metres higher than Niagara Falls! L'Ile d'Orléans is also a must-see for its lovely shops and vineyards.

What to see in Montreal

There are so many things to see, eat, and do in Montreal, it will really depend on what season you're visiting. Some notable mentions include: Old Montreal, Le Quartier des Spectacles, The Underground city, Mount Royal Park, The Olympic stadium, Jean Talon Market, and so much more. 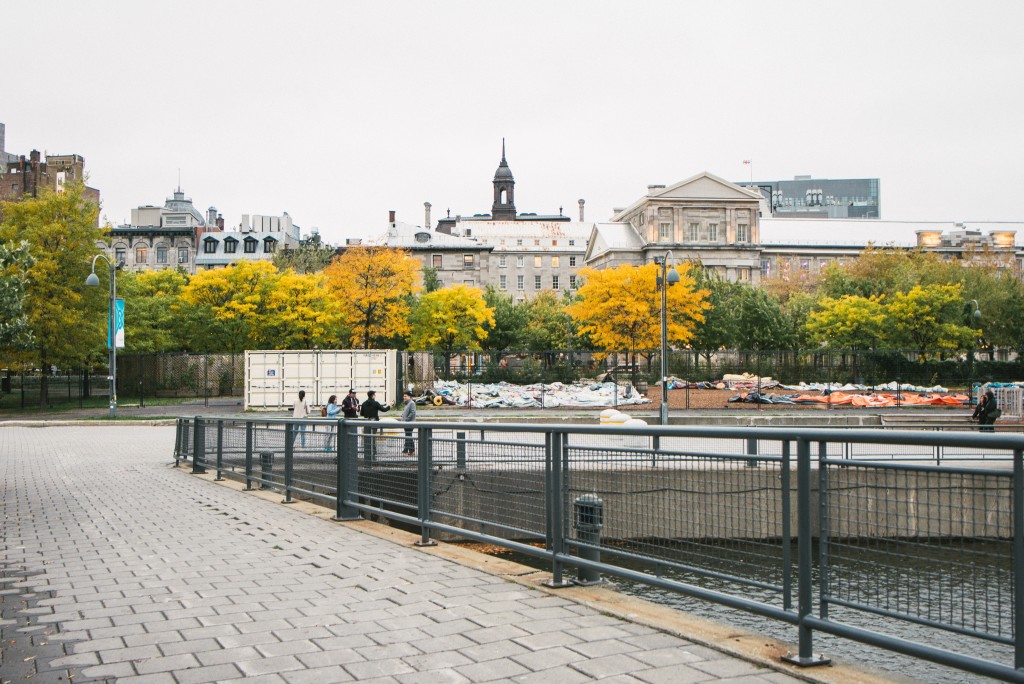 Will you be returning to Quebec City by bus?

Bus from Montreal to Quebec City

You can also go to Montreal by train

Train from Quebec City to Montreal

Busbud.com makes it easy for you to find, compare and book city-to-city bus tickets, all over the world. We save you the extra trip to the bus station. Use Busbud to book your trip online, in your own language and currency, wherever you are. With Busbud, you can buy tickets with confidence. We ensure that you make the most out of your bus trip by partnering up with reliable bus companies from all around the world such as Greyhound, Eurolines, ALSA, OUIBUS (BlaBlaBus), National Express and many others.