For a basketball fan, little is more exciting than attending an NBA game at the arena: the roar of the crowd, the vibrant colors on the court, and the excitement of seeing your favorite stars dunk in person. But there’s no doubt that making a trip to the arena means spending some money.

At Busbud, we spend our days comparing ticket prices and amenities for buses around the world to help our customers get the best value out of their travels. Because many of these same customers are also sports fans and follow their favorite teams on the road, our interest for tickets deals extended to pro sports teams this year.

We decided to take a look back and track trends in NBA tickets over the years: the variations in price, the best months to buy, the cost of each team’s game-day extras. Keep reading to score the details so you can go to a game without breaking the bank. 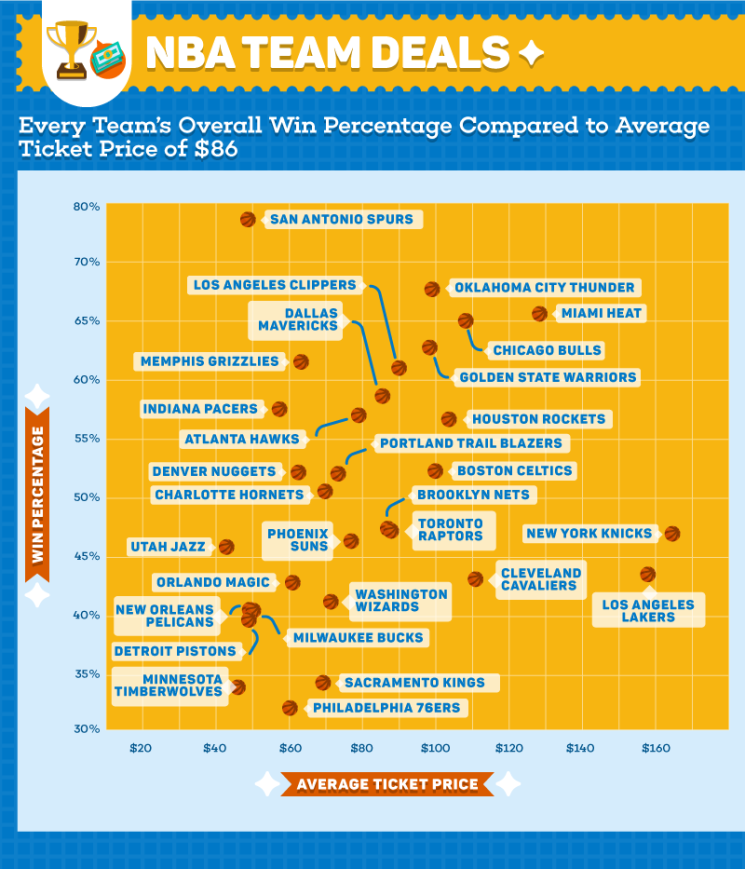 It’s common knowledge that resale ticket prices fluctuate based on factors like the buzz surrounding the game, the team’s recent performance, and the wow factor of the opposing team. But do you pay a premium for tickets straight from the source to see winning teams?

The above graph compares ticket prices with each team’s win percentage. Led by forward Kevin Durant, the Oklahoma City Thunder enjoy a win record approaching 70%; however, the star team’s ticket prices remain in the middle of the pack. This trend extends to many of the top teams, save for the Miami Heat, which has slightly steeper ticket prices.

Despite less-than-stellar records, the Knicks and Lakers hawk the most expensive tickets, averaging around $165 and $158 apiece respectively. Why so high? Teams based in major cities, as well as those with a history of championships, can command top prices – and the L.A. Lakers and New York Knicks have both factors in their favor. As for the Cavs, their higher-than-average ticket prices can be explained in two words: LeBron James. He’s the most popular player in the league, and his mere presence prompted a spike in Cleveland’s ticket prices. The NBA season kicks off in late October and runs until mid-April, at which point the playoffs begin. Over the course of the season, ticket prices can fluctuate wildly. According to our findings, the best month to snag affordable tickets is in August during the off-season, while the second-cheapest month is April.

Prices peak in November as the holidays get underway; prices then drop steadily until April and spike again in May during the much-anticipated playoffs. Fans seeking great deals during a certain time of year can look for special promotions teams offer or wait until game time approaches in hopes that prices will drop as a franchise tries to fill the arena.

Explore the interactive feature below to get a comprehensive history of the NBA’s average ticket prices since the 2010-2011 season. Select a team from the left menu to see its stats.

The interactive feature below gives a detailed history of every team’s fluctuating ticket prices and win percentage from the 2010-2011 season to the 2015-2016 season. Get started by choosing a team from the list on the left. 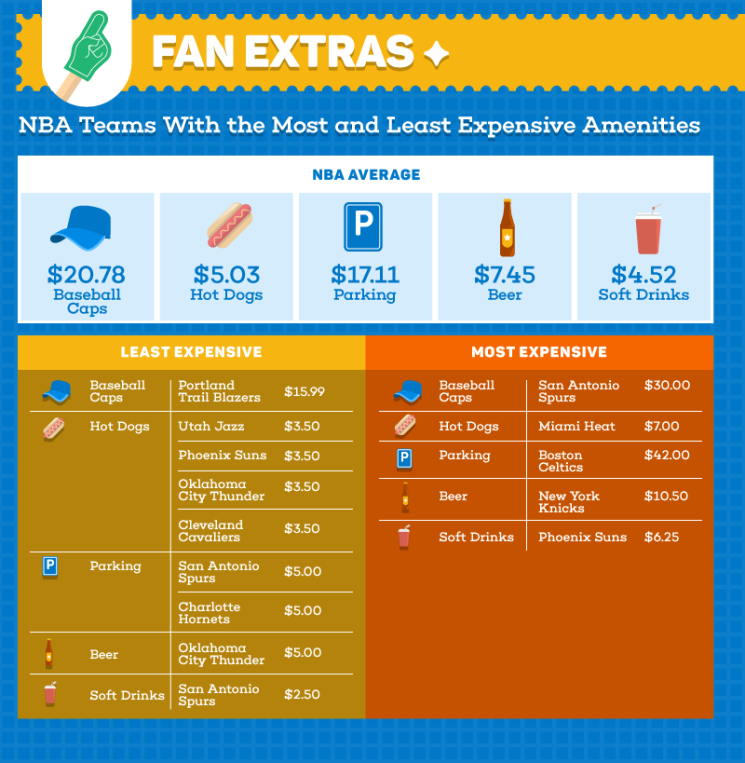 Naturally, going to the big game means you’ll be dropping some cash on more than just tickets. Don’t forget to factor in parking and a souvenir hat. And of course, no arena experience is complete without a mustard-slathered hot dog and your beverage of choice, be it beer or soda. What’s that going to cost? It varies.

If you’re heading to the game in Boston, you may want to leave your car at home: Parking costs an average of $42 – more than twice as much as the national average. If you’re in San Antonio, expect to pay twice as much for a Spurs cap than you would for a Blazers hat in Portland. Bring extra cash to a Heat game if you’re hungry: Hot dogs cost $2 more than average – and twice as much as dogs in a few other arenas. Thirsty? Oklahoma is home to the least expensive beer; a cup of suds in New York will cost twice as much.

Hoop It Up
Going to the arena to see a game in person is sure to be a memorable experience for basketball fans of all ages. We hope the stats we compiled help you get a great deal on tickets to see your favorite team play.

What if you’d love to watch some hoops but your hometown doesn’t have a team? Thankfully, the U.S. has no shortage of NBA teams – 30 to be exact. Even if your favorite team isn’t based in your city, chances are there’s an arena a short bus ride away – and if you check with Busbud, you can save even more money in the end (not to mention skip the hassle of driving). One thing’s certain: The experience of seeing the pros play is well worth the trip.

Fair Use
Feel free to use the assets found on this page freely. When using them, we ask that you link back here so that readers can explore other parts of the project and methodology.