You can find many intercity bus station in Calgary. The most popular bus stations are Downtown Red Arrow Office, North Red Arrow Office, Centex Memorial Drive and 40 St SE Flying J. After you arrive via bus, you can hop on one of the city's rapid transit trains to get to where you need to go.

Ready to see all that Calgary has to offer? 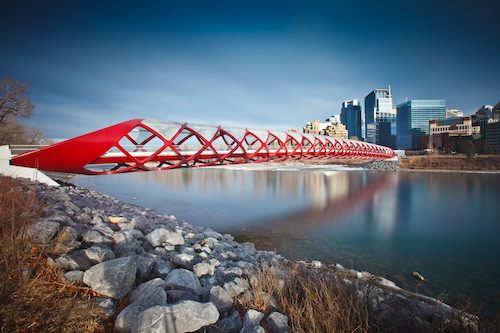 Calgary serves as the cornerstone of Canada's oil industry, but this metropolitan city in the province of Alberta is so much more. Thanks to its Old West–influenced culture, some people even refer to it as "Cowtown." When you take the bus to Calgary and start to explore, you're bound to find plenty to love.

Things to do in Calgary

Head to Prince Island Park, A clean and friendly place where you can go for a walk, toss a Frisbee, or just enjoy nature. The park is close to the Calgary Zoo, which is another attraction you shouldn't miss. You'll love the gorgeous and true-to-life habitats that house the zoo's more than 1,400 animals. There is even a lovely botanical garden at the zoo that is worth a walk-through. If you're into sports, another place you should go is Canada Olympic Park, where you can grab some ski lessons before you head out onto the slopes.

If you would rather keep your recreation indoors, Calgary still has plenty to offer. Glenbow Museum is one of the best in Canada, and you'll get lost in there if you're any kind of history buff. You could then head over to the Scotiabank Saddledome to catch a professional hockey game.

The Stephen Avenue Walk is one of the city's most popular venues for spending money at trendy stores. There are also a few nightclubs in this pedestrian-only zone, so be sure to bring your party clothes.

If you want to find out why Calgary's nickname is Cowtown, go to Stampede Park, which hosts trade shows throughout the year that bring to mind the Wild West. The park's biggest event, the Calgary Stampede, happens every July, and it attracts visitors from great distances who want to get a taste of good old-fashioned rodeo fun.

What are the most popular bus routes to Calgary?

We’ve found the top bus routes travellers take to get to Calgary! Every day our bus partners (Rider Express, Ebus, Red Arrow) bring people from major cities to Calgary. Enjoy the convenience of taking the bus to Calgary!

What bus companies operate from Calgary?

Buses from Red Deer to Calgary for $49
Each day 7 buses connect Red Deer to Calgary. The average travel time for this route is 1h 40m. When you book with Busbud, you can expect an average price of $49. Daily departures are between 1:30 am and 8:00 pm.

Where are the popular bus stations and stops in Calgary?

Popular bus routes to and from Calgary

Busbud helps you easily search, compare and book intercity bus tickets on a worlwide scale with our comprehensive list of bus routes and schedules. Use Busbud to book your trip online, in your own language and currency, wherever you are. With Busbud, you can buy tickets with confidence. We ensure that you make the most out of your bus trip by partnering up with reliable bus companies from all around the world such as Greyhound, Eurolines, ALSA, OUIBUS (BlaBlaBus), National Express and many others.