Last year marked the highest percentage increase in traffic fatalities in 50 years, and many of these accidents may have occurred from seemingly simple violations.

We drove nonstop from Washington, D.C., to New York City to see just how many drivers were on the road and how many of those drivers were committing driving errors and traffic violations. Read on to see what we discovered about the rules of the road.

To understand how well the drivers we encountered were obeying the laws of the streets, we filmed our drive from Washington, D.C., to New York City.

It took us four hours, 39 minutes to get to our destination while obeying the legal speed limits in each state. We drove 238 miles through four states – Maryland, Delaware, New Jersey, and New York. While it was tempting, we didn’t stop for a chili dog or crab cake even once. We shared the highway with 2,561 different vehicles during our nearly five-hour drive – an average of 551 cars per hour.

Of those fellow commuters, we documented 2,182 people driving over the speed limit and eleven driving at excessive speeds. That equates to over 85 percent of all drivers exceeding the legal speed limits. Common misperception holds that driving anywhere from five to 10 miles over the speed limit is acceptable, but even mild speeders can receive tickets.

We also encountered 56 vehicles that changed lanes without a turn signal and three dangerous cutoffs, which brought our overall violations to nearly 88 per 100 cars. The District of Columbia has a total area of 68.34 square miles. From end to end, the U.S. capitol isn’t that big. But what Washington, D.C., lacks in size, it makes up for in traffic congestion. The Federal City was even recently labeled as the worst place for traffic congestion in the U.S.

Despite a less-than-favorable transportation reputation, we found that Washington, D.C., had fewer traffic violations than the other areas we passed through. Of the 96 total cars that we observed in the 21 minutes it took us to drive through D.C., 67 were speeding; two were speeding excessively. That’s an average of 70 percent of D.C.’s vehicles driving above the speed limit.

We also saw six drivers change lanes without using a turn signal, but did not see any dangerous cutoffs. We spent one hour and 36 minutes driving through Maryland – long enough to be tempted by the delicious aroma of seafood and Old Bay. We persevered, and encountered 798 drivers along the way.

Of those drivers, 749 were speeding. Six were speeding excessively. That means that almost 94 percent of the Maryland drivers we encountered were exceeding the speed limit. Another 26 drivers changed lanes without a signal; one driver cut off another vehicle (in total, there were 98 violations per 100 vehicles).

In fact, Maryland traffic deaths rose over 17 percent in 2015. Baltimore had 39 fatalities – ten more than the previous year. The State of Infractions

We passed through Delaware state lines almost two hours into our journey. Delaware may be known as one of the top vacation spots in U.S. to relax or find a great meal, but it doesn’t earn any marks for obeying the rules of the road. While our time there was short (roughly 16 minutes), we ran into the highest proportion of violations in Delaware.

Of the 192 vehicles we passed, 189 were speeding – and three were excessively speeding. Almost 99 percent of the drivers we encountered were driving in excess of the speed limit. Additionally, eight cars changed lanes without using the proper signals, and we observed one dangerous cutoff. Altogether, there were almost 105 violations per 100 vehicles. Yes, you read that right – some drivers committed multiple violations in just the few moments during our encounter with them.

Delaware highway fatalities are also on the rise, particularly for motorcyclists. In 2015, the state saw an increase in the 10-year average for deaths involving motorcycles. Since motorcycle drivers have so little protection (even with helmets and jackets), a lane change or cutoff could be deadly. We traveled through New Jersey for two hours – the longest leg of our journey.

We counted a total of 1,345 cars and caught 1,177 speeding. While that represents over 87 percent of the total drivers we encountered in New Jersey, we didn’t notice any excessive speeders during that part of our trip. We also didn’t see any dangerous cutoffs, but 16 cars improperly changed lanes 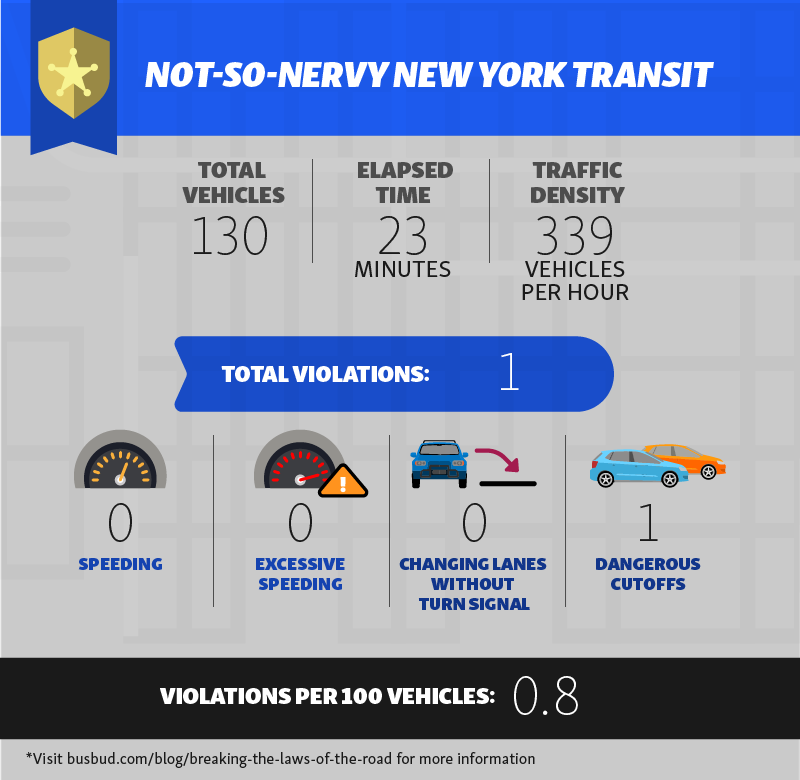 The New York State of Traffic

We know what you’re thinking: We traveled almost five hours and only witnessed one traffic violation in the Big Apple. Well, sort of.

We spent just under 23 minutes driving through New York to get to our final destination … and spent most of that time sitting in traffic. Still, that doesn’t mean NYC driving is necessarily safer than in other cities.

Because their traffic congestion is as famous as their pizza, few residents in New York City own cars. Many rely on public transportation, ride-booking, and just plain walking to get around (traffic violations involving pedestrians are on the rise). The dangers of traffic violations can affect all of us, whether we’re in the car or not.

Seemingly simple traffic violations can become dangerous in mere seconds. If you need to get from one place to another but driving just isn’t your thing, leave the task to us. Visit busbud.com the best way to book bus tickets. We cover routes from New York to D.C. (like this one), New York to Miami, Los Angeles to Las Vegas, and many others. We connect you with some of the most popular bus companies to get the best price for wherever your next adventure is taking you. Visit busbud.com today to learn more.

We mounted a camera to the front windshield of our car and drove from Washington, D.C., to New York City. We drove at the posted speed limit at all possible times and only slowed down at intersections and in traffic congestion. After the trip, we carefully logged the video on a computer. Speeders were simply classified as those who were traveling faster than us on the highway. Excessive speeders were classified as those who were traveling much faster than the general flow of traffic. We only recorded instances of changing lanes without a turn signal when we were certain that the driver did not utilize one, and we only recorded cutoffs when they were particularly egregious. For the total car count, we logged every vehicle that was moving in the same direction as us – parked cars were not recorded and we took special care to make sure no car was counted twice. No buses were harmed during the production of this video.

Did you enjoy this production? Please feel free to share it (for noncommercial purposes) with all of your followers! Just don’t do it while you’re driving – we already have enough dangers on the road…