There are two main stations in Vancouver that handle intercity transportation.

Pacific Central Station is primarily a train station; it is the western terminus of Canada's VIA railway system. However, the terminal also handles a significant amount of bus traffic. The station is on the eastern edge of downtown, right next to Chinatown.

You may also be able to catch your bus at Holiday Inn on Howe, which is on the other side of downtown from Pacific Central Station. It is near Yaletown and Davie Village.

Ready to see all that Vancouver has to offer? 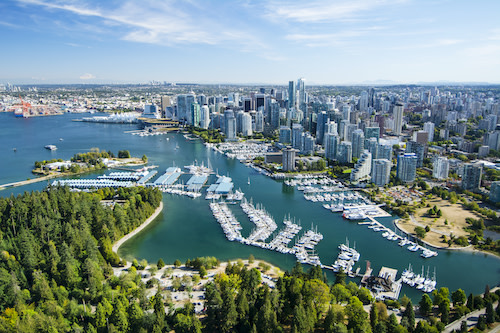 Vancouver, BC is a diverse city set against a beautiful backdrop of mountains and water. When you arrive in the city by bus, you're bound to enjoy its endless bounty of things to do and sights to see.

Things to do in Vancouver

You'll love just walking around in Vancouver. Thanks to the city's widely diverse population, you'll see people from different countries across the world, including Africa, China, Taiwan, and many others. You'll also appreciate how clean Vancouver is; it was recently ranked the 10th cleanest city in the world!

No trip to Vancouver is complete without a visit to Stanley Park, which boasts more than 1,000 acres of things to do. The 14-mile path along the seawall is beautiful, and you can rent a bike so you don't wear yourself out by walking. The park also has a heated pool, four play areas, and some amazing art. The Vancouver Aquarium is also inside the park, but keep in mind that admission costs extra.

Be sure to schedule time to see Vancouver Lookout, which has an observation deck that gives a gorgeous view of the city. If you make this your first sightseeing stop, you can get your bearings and whet your appetite for all the good things to come!

Vancouver, BC is one of the most exciting and diverse cities in North America. Take the bus there and get ready to have an awesome time!

What bus companies operate from Vancouver?

Where are the popular bus stations and stops in Vancouver?

Busbud helps you easily search, compare and book intercity bus tickets on a worldwide scale with our comprehensive list of bus routes and schedules. With Busbud, wherever you go, you have a worldwide bus station within reach and available in your own language and currency. With Busbud, you can buy tickets with confidence. We ensure that you make the most out of your bus trip by partnering up with reliable bus companies from all around the world such as Greyhound, Eurolines, ALSA, OUIBUS, National Express and many others.